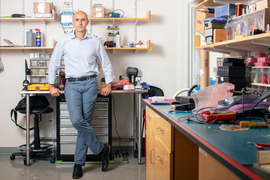 Much of our daily life requires us to make inferences about the world around us. As you think about which direction your tennis opponent will hit the ball, or try to figure out why your child is crying, your brain is searching for answers about possibilities that are not directly accessible through sensory experiences.

MIT Associate Professor Mehrdad Jazayeri has devoted most of his career to exploring how the brain creates internal representations, or models, of the external world to make intelligent inferences about hidden states of the world.

“The one question I am most interested in is how does the brain form internal models of the external world? Studying inference is really a powerful way of gaining insight into these internal models,” says Jazayeri, who recently earned tenure in the Department of Brain and Cognitive Sciences and is also a member of MIT’s McGovern Institute for Brain Research.

Using a variety of approaches, including detailed analysis of behavior, direct recording of activity of neurons in the brain, and mathematical modeling, he has discovered how the brain builds models of statistical regularities in the environment. He has also found circuits and mechanisms that enable the brain to capture the causal relationships between observations and outcomes.

Jazayeri, who has been on the faculty at MIT since 2013, took an unusual path to a career in neuroscience. Growing up in Tehran, Iran, he was an indifferent student until his second year of high school when he got interested in solving challenging geometry puzzles. He also started programming with the ZX Spectrum, an early 8-bit personal computer, that his father had given him.

During high school, he was chosen to train for Iran’s first ever National Physics Olympiad team, but when he failed to make it to the international team, he became discouraged and temporarily gave up on the idea of going to college. Eventually, he participated in the University National Entrance Exam and was admitted to the electrical engineering department at Sharif University of Technology.

Jazayeri didn’t enjoy his four years of college education. The experience mostly helped him realize that he was not meant to become an engineer. “I realized that I’m not an inventor. What inspires me is the process of discovery,” he says. “I really like to figure things out, not build things, so those four years were not very inspiring.”

After graduating from college, Jazayeri spent a few years working on a banana farm near the Caspian Sea, along with two friends. He describes those years as among the best and most formative of his life. He would wake by 4 a.m., work on the farm until late afternoon, and spend the rest of the day thinking and reading. One topic he read about with great interest was neuroscience, which led him a few years later to apply to graduate school.

He immigrated to Canada and was admitted to the University of Toronto, where he earned a master’s degree in physiology and neuroscience. While there, he worked on building small circuit models that would mimic the activity of neurons in the hippocampus.

From there, Jazayeri went on to New York University to earn a PhD in neuroscience, where he studied how signals in the visual cortex support perception and decision-making. “I was less interested in how the visual cortex encodes the external world,” he says. “I wanted to understand how the rest of the brain decodes the signals in visual cortex, which is, in effect, an inference problem.”

He continued pursuing his interest in the neurobiology of inference as a postdoc at the University of Washington, where he investigated how the brain uses temporal regularities in the environment to estimate time intervals, and uses knowledge about those intervals to plan for future actions.

Inference is the process of drawing conclusions based on information that is not readily available. Making rich inferences from scarce data is one of humans’ core mental capacities, one that is central to what makes us the most intelligent species on Earth. To do so, our nervous system builds internal models of the external world, and those models that help us think through possibilities without directly experiencing them.

The problem of inferences presents itself in many behavioral settings.

“Our nervous system makes all sorts of internal models for different behavioral goals, some that capture the statistical regularities in the environment, some that link potential causes to effects, some that reflect relationships between entities, and some that enable us to think about others,” Jazayeri says.

Jazayeri’s lab at MIT is made up of a group of cognitive scientists, electrophysiologists, engineers, and physicists with a shared interest in understanding the nature of internal models in the brain and how those models enable us to make inferences in different behavioral tasks.

Early work in the lab focused on a simple timing task to examine the problem of statistical inference, that is, how we use statistical regularities in the environment to make accurate inference. First, they found that the brain coordinates movements in time using a dynamic process, akin to an analog timer. They also found that the neural representation of time in the frontal cortex is being continuously calibrated based on prior experience so that we can make more accurate time estimates in the presence of uncertainty.

Later, the lab developed a complex decision-making task to examine the neural basis of causal inference, or the process of deducing a hidden cause based on its effects. In a paper that appeared in 2019, Jazayeri and his colleagues identified a hierarchical and distributed brain circuit in the frontal cortex that helps the brain to determine the most probable cause of failure within a hierarchy of decisions.

More recently, the lab has extended its investigation to other behavioral domains, including relational inference and social inference. Relational inference is about situating an ambiguous observation using relational memory. For example, coming out of a subway in a new neighborhood, we may use our knowledge of the relationship between visible landmarks to infer which way is north. Social inference, which is extremely difficult to study, involves deducing other people’s beliefs and goals based on their actions.

Along with studies in human volunteers and animal models, Jazayeri’s lab develops computational models based on neural networks, which helps them to test different possible hypotheses of how the brain performs specific tasks. By comparing the activity of those models with neural activity data from animals, the researchers can gain insight into how the brain actually performs a particular type of inference task.

“My main interest is in how the brain makes inferences about the world based on the neural signals,” Jazayeri says. “All of my work is about looking inside the brain, measuring signals, and using mathematical tools to try to understand how those signals are manifestations of an internal model within the brain.”