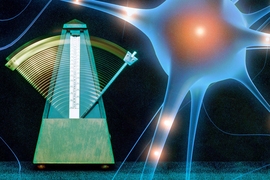 Keeping track of time is critical for many tasks, such as playing the piano, swinging a tennis racket, or holding a conversation. Neuroscientists at MIT and Columbia University have now figured out how neurons in one part of the brain measure time intervals and accurately reproduce them.

The researchers found the lateral intraparietal cortex (LIP), which plays a role in sensorimotor function, represents elapsed time, as animals measure and then reproduce a time interval. They also demonstrated how the firing patterns of population of neurons in the LIP could coordinate sensory and motor aspects of timing.

LIP is likely just one node in a circuit that measures time, says Mehrdad Jazayeri, the lead author of a paper describing the work in the Oct. 8 issue of Current Biology.

“I would not conclude that the parietal cortex is the timer,” says Jazayeri, the Robert A. Swanson Career Development Assistant Professor of Life Sciences in MIT's Department of Brain and Cognitive Sciences, and a member of the McGovern Institute for Brain Research. “What we are doing is discovering computational principles that explain how neurons’ firing rates evolve with time, and how that relates to the animals’ behavior in single trials. We can explain mathematically what’s going on.”

The paper’s senior author is Michael Shadlen, a professor of neuroscience and member of the Mortimer B. Zuckerman Mind Brain Behavior Institute at Columbia University.

As time goes by

Jazayeri, who joined the MIT faculty in 2013, began studying timing in the brain several years ago while a postdoc at the University of Washington. He began by testing humans’ ability to measure and reproduce time using a task called “ready, set, go.” In this experiment, the subject measures the time between two flashes (“ready” and “set”) and then presses a button (“go”) at the appropriate time — that is, after the same amount of time that separated the “ready” and “set.”

From these studies, he discovered that people do not simply measure an interval and then reproduce it. Rather, after measuring an interval they combine that measurement, which is imprecise, with their prior knowledge of what the interval could have been. This prior knowledge, which builds up as they repeat the task many times, allows people to reproduce the interval more accurately.

“When people reproduce time, they don’t seem to use a timer,” Jazayeri says. “It’s an active act of probabilistic inference that goes on.”

“As time goes by during the measurement, the animal knows that the interval that it has to produce is longer and therefore requires a shallower slope,” Jazayeri says.

Using this data, the researchers could correctly predict, based on the slope at the end of the measurement phase, when the animal would produce the “go” signal.

“Previous research has shown that some neurons exhibit a ramping up of their firing rate that culminates with the onset of a timed motor response. This research is exciting because it provides the first hint as to what may control the slope of this ‘neural ramping,’ specifically that the slope of the ramp may be determined by the firing rate at the beginning of the timed interval,” says Dean Buonomano, a professor of behavioral neuroscience at the University of California at Los Angeles who was not involved in the research.

All cognitive and motor functions rely on time to some extent. While LIP represents time during interval reproduction, Jazayeri believes that tracking time occurs throughout brain circuits that connect subcortical structures such as the thalamus, basal ganglia, and cerebellum to the cortex.

“Timing is going to be a highly distributed problem for the brain. There’s not going to be one place in the brain that does timing,” he says.

His lab is now pursuing several questions raised by this study. In one follow-up, the researchers are investigating how animals’ behavior and brain activity change based on their expectations for how long the first interval will last.

In another experiment, they are training animals to reproduce an interval that they get to measure twice. Preliminary results suggest that during the second interval, the animals refine the measurement they took during the first interval, allowing them to perform better than when they make just one measurement.

A head of time