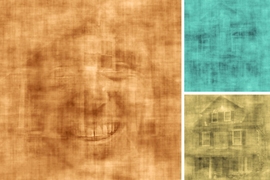 ↓ Download Image
Caption: Screen shots from a video of overlapping images of faces and houses, shown to subjects who were asked to pay attention to one or the other.
Credits: Video by Daniel Baldauf, screen shots colorized by MIT News

Caption:
Screen shots from a video of overlapping images of faces and houses, shown to subjects who were asked to pay attention to one or the other.
Credits:
Video by Daniel Baldauf, screen shots colorized by MIT News

Picking out a face in the crowd is a complicated task: Your brain has to retrieve the memory of the face you’re seeking, then hold it in place while scanning the crowd, paying special attention to finding a match.

A new study by MIT neuroscientists reveals how the brain achieves this type of focused attention on faces or other objects: A part of the prefrontal cortex known as the inferior frontal junction (IFJ) controls visual processing areas that are tuned to recognize a specific category of objects, the researchers report in the April 10 online edition of Science.

Scientists know much less about this type of attention, known as object-based attention, than spatial attention, which involves focusing on what’s happening in a particular location. However, the new findings suggest that these two types of attention have similar mechanisms involving related brain regions, says Robert Desimone, the Doris and Don Berkey Professor of Neuroscience, director of MIT’s McGovern Institute for Brain Research, and senior author of the paper.

“The interactions are surprisingly similar to those seen in spatial attention,” Desimone says. “It seems like it’s a parallel process involving different areas.”

In the new study, the researchers found that IFJ coordinates with a brain region that processes faces, known as the fusiform face area (FFA), and a region that interprets information about places, known as the parahippocampal place area (PPA). The FFA and PPA were first identified in the human cortex by Nancy Kanwisher, the Walter A. Rosenblith Professor of Cognitive Neuroscience at MIT.

The IFJ has previously been implicated in a cognitive ability known as working memory, which is what allows us to gather and coordinate information while performing a task — such as remembering and dialing a phone number, or doing a math problem.

For this study, the researchers used magnetoencephalography (MEG) to scan human subjects as they viewed a series of overlapping images of faces and houses. Unlike functional magnetic resonance imaging (fMRI), which is commonly used to measure brain activity, MEG can reveal the precise timing of neural activity, down to the millisecond. The researchers presented the overlapping streams at two different rhythms — two images per second and 1.5 images per second — allowing them to identify brain regions responding to those stimuli.

“We wanted to frequency-tag each stimulus with different rhythms. When you look at all of the brain activity, you can tell apart signals that are engaged in processing each stimulus,” says Daniel Baldauf, a postdoc at the McGovern Institute and the lead author of the paper.

Each subject was told to pay attention to either faces or houses; because the houses and faces were in the same spot, the brain could not use spatial information to distinguish them. When the subjects were told to look for faces, activity in the FFA and the IFJ became synchronized, suggesting that they were communicating with each other. When the subjects paid attention to houses, the IFJ synchronized instead with the PPA.

A video of overlapping images of faces and houses was shown to subjects who were asked to pay attention to one or the other.

The researchers also found that the communication was initiated by the IFJ and the activity was staggered by 20 milliseconds — about the amount of time it would take for neurons to electrically convey information from the IFJ to either the FFA or PPA. The researchers believe that the IFJ holds onto the idea of the object that the brain is looking for and directs the correct part of the brain to look for it.

The MEG scanner, as well as the study’s “elegant design,” were critical to discovering this relationship, says Robert Knight, a professor of psychology and neuroscience at the University of California at Berkeley who was not part of the research team.

“Functional MRI gives hints of connectivity,” Knight says, “but the time course is way too slow to show these millisecond-scale frequencies and to establish what they show, which is that the inferior frontal lobe is the prime driver.”

Further bolstering this idea, the researchers used an MRI-based method to measure the white matter that connects different brain regions and found that the IFJ is highly connected with both the FFA and PPA.

Members of Desimone’s lab are now studying how the brain shifts its focus between different types of sensory input, such as vision and hearing. They are also investigating whether it might be possible to train people to better focus their attention by controlling the brain interactions  involved in this process.

“You have to identify the basic neural mechanisms and do basic research studies, which sometimes generate ideas for things that could be of practical benefit,” Desimone says. “It’s too early to say whether this training is even going to work at all, but it’s something that we’re actively pursuing.”