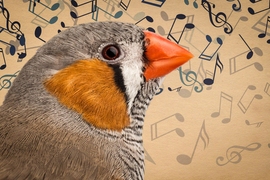 ↓ Download Image
Caption: When zebra finches first begin to sing, they produce only nonsense syllables similar to the babble of human babies. Now researchers at MIT have uncovered the brain activity that supports the birds’ song-learning process.

Caption:
When zebra finches first begin to sing, they produce only nonsense syllables similar to the babble of human babies. Now researchers at MIT have uncovered the brain activity that supports the birds’ song-learning process.
Credits:
Image: MIT News

Male zebra finches, small songbirds native to central Australia, learn their songs by copying what they hear from their fathers. These songs, often used as mating calls, develop early in life as juvenile birds experiment with mimicking the sounds they hear.

MIT neuroscientists have now uncovered the brain activity that supports this learning process. Sequences of neural activity that encode the birds’ first song syllable are duplicated and altered slightly, allowing the birds to produce several variations on the original syllable. Eventually these syllables are strung together into the bird’s signature song, which remains constant for life.

“The advantage here is that in order to learn new syllables, you don’t have to learn them from scratch. You can reuse what you’ve learned and modify it slightly. We think it’s an efficient way to learn various types of syllables,” says Tatsuo Okubo, a former MIT graduate student and lead author of the study, which appears in the Nov. 30 online edition of Nature.

Okubo and his colleagues believe that this type of neural sequence duplication may also underlie other types of motor learning. For example, the sequence used to swing a tennis racket might be repurposed for a similar motion such as playing Ping-Pong. “This seems like a way that sequences might be learned and reused for anything that involves timing,” says Emily Mackevicius, an MIT graduate student who is also an author of the paper.

The paper’s senior author is Michale Fee, a professor of brain and cognitive sciences at MIT and a member of the McGovern Institute for Brain Research.

Previous studies from Fee’s lab have found that a part of the brain’s cortex known as the HVC is critical for song production.

Typically, each song lasts for about one second and consists of multiple syllables. Fee’s lab has found that in adult birds, individual HVC neurons show a very brief burst of activity — about 10 milliseconds or less — at one moment during the song. Different sets of neurons are active at different times, and collectively the song is represented by this sequence of bursts.

In the new Nature study, the researchers wanted to figure out how those neural patterns develop in newly hatched zebra finches. To do that, they recorded electrical activity in HVC neurons for up to three months after the birds hatched.

When zebra finches begin to sing, about 30 days after hatching, they produce only nonsense syllables known as subsong, similar to the babble of human babies. At first, the duration of these syllables is highly variable, but after a week or so they turn into more consistent sounds called protosyllables, which last about 100 milliseconds. Each bird learns one protosyllable that forms a scaffold for subsequent syllables.

The researchers found that within the HVC, neurons fire in a sequence of short bursts corresponding to the first protosyllable that each bird learns. Most of the neurons in the HVC participate in this original sequence, but as time goes by, some of these neurons are extracted from the original sequence and produce a new, very similar sequence. This chain of neural sequences can be repurposed to produce different syllables.

This splitting of neural sequences happens repeatedly until the birds can produce between three and seven different syllables, the researchers found. This entire process takes about two months, at which point each bird has settled on its final song.

“This is a very natural way for motor patterns to evolve, by repeating something and then molding it, but until now nobody had any good data to understand how the brain actually does that,” says Ofer Tchernichovski, a professor of psychology at Hunter College who was not involved in the research. “What’s cool about this paper is they managed to follow how brain centers govern these transitions from simple repetitive patterns to more complex patterns."

The researchers note that this process is similar to what is believed to drive the production of new genes and traits during evolution.

“If you duplicate a gene, then you could have separate mutations in both copies of the gene and they could eventually do different functions,” Okubo says. “It’s similar with motor programs. You can duplicate the sequence and then independently modify the two daughter motor programs so that they can now each do slightly different things.”

Mackevicius is now studying how input from sound-processing parts of the brain to the HVC contributes to the formation of these neural sequences.