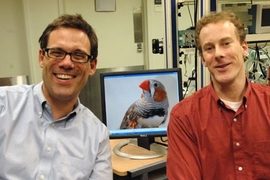 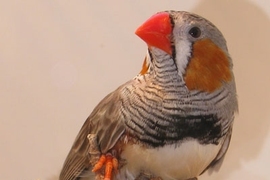 As anyone who watched the Olympics can appreciate, timing matters when it comes to complex sequential actions. It can make a difference between a perfect handspring and a fall, for instance. But what controls that timing? MIT scientists are closing in on the brain regions responsible, thanks to some technical advances and some help from songbirds.

"All our movements, from talking and walking to acrobatics or piano playing, are sequential behaviors," explained Michale Fee, an investigator in the McGovern Institute for Brain Research at MIT and an associate professor in MIT's Department of Brain and Cognitive Sciences. "But we haven't had the necessary tools to understand how timing is generated within the brain."

Now Fee and colleagues report in the Nov. 13 issue of Nature a new method for altering the speed of brain activity. And using that technique, "we think we have found the clock that controls the timing of the bird's song," Fee said.

The zebra finch's song is widely studied as a model for understanding how the brain produces complex behavior sequences. Each song lasts about one second, and contains multiple syllables in a highly stereotypic sequence. Two brain regions -- the High Vocal Center (HVC) and the robust nucleus of the arcopallium (RA) -- are known to be important for singing, because deactivating either region prevents song production. But uncovering the clock mechanism required a more subtle method.

Accordingly, Fee's group devised a technique to slow down different parts of the brain. They took advantage of the fact that all biological processes are influenced by temperature. Just as molasses run slower in January, neurons function more slowly when they are cooled down.

The authors constructed a tiny Peltier cooling apparatus based on a device similar to those used in portable electronic beverage coolers. Then they used this device to produce a small cooling effect that could be localized to precise parts of the brain.

"We suspected that cooling different brain regions involved in singing might alter the song in different ways," explained first author Michael Long, a postdoctoral researcher in the Fee lab.

Cooling the RA brain region had almost no effect on the bird's song. But cooling HVC produced a dramatic effect. The song slowed in proportion to the degree of cooling, with the biggest temperature change (a 10 degrees Celsius reduction) causing the song to stretch out by around 30 percent.

Not only did the overall duration of the song increase, so did each individual syllable, so the overall rhythmic structure was preserved without changing the sounds within the song. The effect can be compared to a music box or piano roll. Rotating the drum more slowly slows the tempo of the music without affecting individual notes.

What intrigues Fee and colleagues now is: How does HVC work to control song timing? Their previous electrical recordings of individual HVC neurons suggest it functions like a cascade of falling dominoes, with waves of activity propagating at a fixed speed through the neural circuitry -- an idea they are now testing.

"We can also use this cooling technology to discover which brain regions control the timing of different complex behaviors in different animals, something that has been very difficult to assess until now," Fee said. "We know that HVC is related in some ways to [the] human cortex, so it could be showing us a very general mechanism for representing the passage of time within the brain."

This study was funded by the National Institutes of Health and the Human Frontiers Science Project.