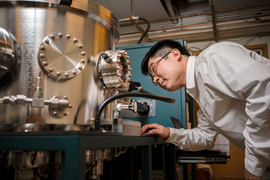 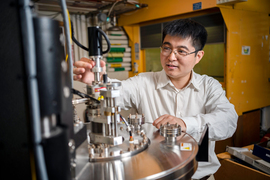 ↓ Download Image
Caption: “In the scientific community, it had been under debate whether you can electrically switch the spin orientation inside these antiferromagnetic materials. Using experiments, we showed that you can,” Liu says.
Credits: Photo: Jodi Hilton 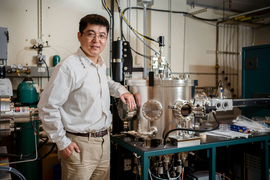 ↓ Download Image
Caption: “The colleagues and students are the most precious part of MIT. To be able to discuss questions and talk to people who are the smartest in the world, that is the most enjoyable experience of doing this job,” Liu says.
Credits: Photo: Jodi Hilton

Caption:
MIT Associate Professor Luqiao Liu utilizes novel materials and electron spin to create next-generation memory hardware for computers that can store more information, use less power to operate, and retain information for a longer period of time. In this photo, Liu peers inside a sputtering deposition system, which is used to grow magnetic thin films.
Credits:
Photo: Jodi Hilton

Caption:
“In the scientific community, it had been under debate whether you can electrically switch the spin orientation inside these antiferromagnetic materials. Using experiments, we showed that you can,” Liu says.
Credits:
Photo: Jodi Hilton

Caption:
“The colleagues and students are the most precious part of MIT. To be able to discuss questions and talk to people who are the smartest in the world, that is the most enjoyable experience of doing this job,” Liu says.
Credits:
Photo: Jodi Hilton

Luqiao Liu was the kind of kid who would rather take his toys apart to see how they worked than play with them the way they were intended.

Curiosity has been a driving force throughout his life, and it led him to MIT, where Liu is a newly tenured associate professor in the Department of Electrical Engineering and Computer Science and a member of the Research Laboratory of Electronics.

Rather than taking things apart, he’s now using novel materials and nanoscale fabrication techniques to build next-generation electronics that use dramatically less power than conventional devices. Curiosity still comes in handy, he says, especially since he and his collaborators work in the largely uncharted territory of spin electronics — a field that only emerged in the 1980s.

“There are many challenges that we must overcome in our work. In spin electronics, there is still a gap between what could be done fundamentally and what has been done so far. There is a lot still to study in terms of getting better materials and finding new mechanisms so we can reach higher and higher performance,” says Liu, who is also a member of the MIT-IBM Watson AI Lab.

Electrons are subatomic particles that possess a fundamental quantum property known as spin. One way to visualize this is to think of a spinning top that circulates around itself, which gives the top angular momentum. That angular momentum, a product of the spinning top’s mass, radius, and velocity, is known as its spin.

Although electrons don’t technically rotate on an axis like a top, they do possess the same kind of spin. Their angular momentum can be pointing “up” or “down.” Instead of using positive and negative electric charges to represent binary information (1s and 0s) in electronic devices, engineers can use the binary nature of electron spin.

Because it takes less energy to change the spin direction of electrons, electron spin can be used to switch transistors in electronic devices using much less power than with traditional electronics. Transistors, the basic building blocks of modern electronics, are used to regulate electrical signals.

Also, due to their angular momentum, electrons behave like tiny magnets. Researchers can use these magnetic properties to represent and store information in computer memory hardware. Liu and his collaborators are aiming to accelerate the process, removing the speed bottlenecks that hold back lower-power, higher-performance computer memory devices.

Liu’s path to studying computer memory hardware and spin electronics began with refrigerator magnets. As a young child, he wondered why a magnet would stick to the fridge.

That early curiosity helped to spark his interest in science and math. As he delved into those subjects in high school and college, learning more about physics, chemistry, and electronics, his curiosity about magnetism and its uses in computers deepened.

When he had the opportunity to pursue a PhD at Cornell University and join a research group that was studying magnetic materials, Liu found the perfect match.

“I spent the next five or six years looking into new and more efficient ways to generate electron spin current and use that to write information into magnetic computer memories,” he says.

While he was fascinated by the world of research, Liu wanted to try his hand at an industry career, so he joined IBM’s T.J. Watson Research Center after graduate school. There, his work focused on developing more efficient magnetic random access memory hardware for computers.

“Making something finally work in a commercially available format is quite important, but I didn’t find myself fully engaged with that kind of fine-tuning work. I wanted to show the viability of very novel work — to prove that some new concept is possible,” Liu says. He joined MIT as an assistant professor in 2015.

Because they don’t produce magnetic fields, antiferromagnetic materials can be packed closer together onto a memory device, which leads to higher storage capacity. And their lack of a magnetic field means the spin states can be switched between “up” and “down” very quickly, so antiferromagnetic materials can switch transistors much faster than traditional materials, Liu explains.

“In the scientific community, it had been under debate whether you can electrically switch the spin orientation inside these antiferromagnetic materials. Using experiments, we showed that you can,” he says.

In his experiments, Liu often uses novel materials that were created just a few years ago, so all their properties are not yet well-understood. But he enjoys the challenge of integrating them into devices and testing their functionality. Finding better materials to leverage electron spin in computer memories can lead to devices that use less power, store more information, and retain that information for a longer period of time.

Liu takes advantage of the cutting-edge equipment inside MIT.nano, a shared 214,000-square-foot nanoscale research center, to build and test nanoscale devices. Having such state-of-the-art facilities at his fingertips is a boon for his research, he says.

But for Liu, the human capital is what really fuels his work.

“The colleagues and students are the most precious part of MIT. To be able to discuss questions and talk to people who are the smartest in the world, that is the most enjoyable experience of doing this job,” he says.

He, his students, and colleagues are pushing the young field of spin electronics forward.

In the future, he envisions using antiferromagnetic materials in tandem with existing technologies to create hybrid computing devices that achieve even better performance. He also plans to dive deeper into the world of quantum technologies. For instance, spin electronics could be used to efficiently control the flow of information in quantum circuits, he says.

In quantum computing, signal isolation is critical — the information must flow in only one direction from the quantum circuit to the external circuit. He is exploring the use of a phenomenon known as a spin wave, which is the excitation of electron spin inside magnetic materials, to ensure the signal only moves in one direction.

Whether he is investigating quantum computing or probing the properties of new materials, one thing holds true — Liu continues to be driven by an insatiable curiosity.

“We are continually exploring, delving into many exciting and challenging new topics toward the goal of making better computing memory or digital logic devices using spin electronics,” he says.