Caption:
Stephanie Bauman, an intern in the Materials Process Center and Center for Materials Science and Engineering's 2017 Summer Scholar program, holds a sample of manganese gallium, a new material known as an antiferromagnet, that can serve as the basis for long lasting, spintronic computer memory devices. She worked in the lab of assistant professor of electrical engineering Luqiao Liu.
Credits:
Photo: Denis Paiste/Materials Processing Center

Assistant professor of electrical engineering Luqiao Liu is developing new magnetic materials, known as antiferromagnets, that can be operated at room temperature by reversing their electron spin and can serve as the basis for long-lasting, spintronic computer memory. Stephanie Bauman, an intern in the Materials Processing Center and Center for Materials Science and Engineering Summer Scholars program, spent her internship making and testing these new materials, which include manganese gallium samples.

“In our project we're working on the area of spintronics, anti-ferromagnetic devices that switch electron spin controlled by a current,” said Bauman, a University of South Florida physics major. “I'm working with a lot of new equipment like the vibrating sample magnetometer and the sputterer to lay down thin films.” 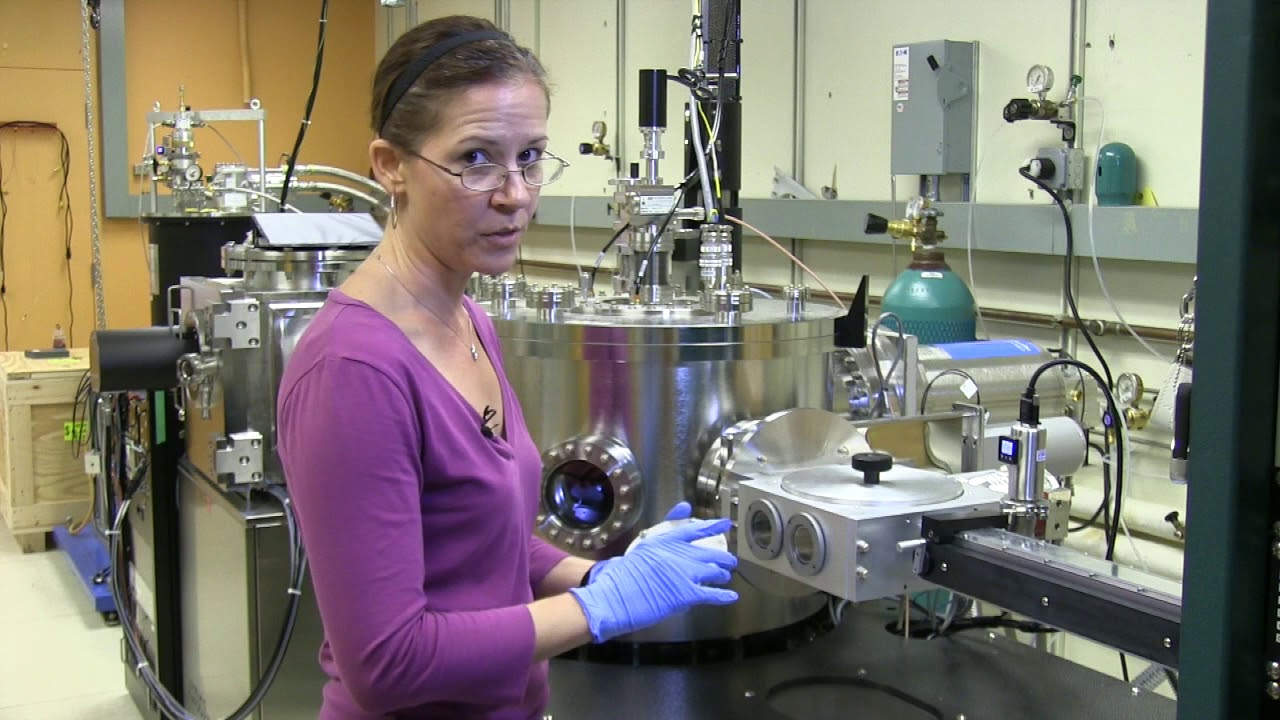 “I’ve been working on a daily basis with Joe Finley, who is a graduate student here, and he’s been a explaining a lot of things to me,” Bauman said. “It’s a very dense subject matter. And he does help me out a lot when we go to things like the X-ray diffraction room, and he shows me how the graphs can interpret how thick each layer of the thin layers of the devices are. He’s really helpful and easy to work with.”

During a visit to the lab, where she synthesizes these thin films with a special machine called a sputter deposition chamber, Bauman said she always refers to a checklist to make sure she's doing everything in the right order. In order to take out a sample from the machine, she follows a complicated set of steps, making sure its parts are correctly lined up and unhooking the sample holder in the main chamber. Because the chamber is pressurized, she must bring it back to everyday atmospheric pressure before taking it out. “Now that I can see that it disengaged, I go ahead and move it all the way back up,” she said. With the sample holder on a moveable arm, she is able to rotate it out.

The sample moved across a gear arm out of the main chamber into transfer chamber known as a load lock. “A very, very important part of this is to make sure you close the transfer valve again, otherwise you mess up the pressure in the main chamber,” she said. After double-checking the transfer valve is closed, she brought the load lock back to sea level pressure of 760 torr. Then she took out the sample holder.

“As you can see the sample is really tiny. It's half a centimeter by a half a centimeter, which is what we're working with right now,” Bauman said. As she loosened the screws on the arms holding the sample in place, she noted that she had to be careful not to scratch the sample with the arms. Once safely removed, she placed the sample in a special holder, labeled based on when each sample was made, which sample of the day it is and its thickness. That way, she noted, “we can refer back to that in our data so that we know what thickness levels that we’re testing.”

“Sometimes you end up playing tiddlywinks. I know that some younger people don't really know what that game is, but it's what it looks like when you push down on the arm, and the sample goes flying,” she cautioned.

Bauman then demonstrated how a new sample is loaded into the sputterer device. “Carefully tighten the screw, making sure not to torque it too much, then you move the other arm into place,” she said. Once both arms were tightened on the sample holder, she was able to put the sample into the load lock. “Very simple just make sure it's lined up correctly. It's also important to make sure the O-ring is clean, and so is the lid before you put it back on. That way there's a very good seal. So that's really it for the loading, and then you just turn the vacuum pumps back on and wait until it reaches the appropriate pressure and then load it into the main chamber.”

“I'm actually a non-traditional student, which means I'm a little bit older,” Bauman explained. “I have been in the military for 20 years, and I also had a civilian career for a long time in aviation contracts. I decided to go back to school for physics, and it's really been rewarding, especially this internship.”

Bauman’s internship is supported, in part, by the National Science Foundation’s Materials Research Science and Engineering Centers program. Participants in the Research Experience for Undergraduates, co-sponsored by the Materials Processing Center and the Center for Materials Science and Engineering, presented their results at a poster session during the last week of the program. The program ran from June 15 to Aug. 5 on the Cambridge campus.