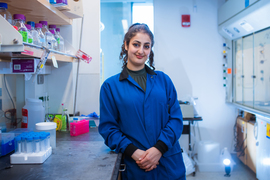 ↓ Download Image
Caption: “Growing up in Iran, I never imagined I would have the opportunity to go to a world-renowned university such as MIT,” Azin Saebi says.
Credits: Gretchen Ertl 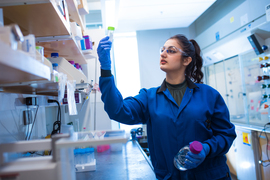 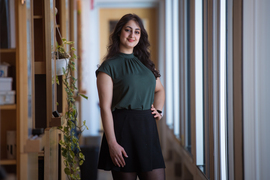 ↓ Download Image
Caption: Outside of lab, Saebi has served as a teaching assistant for MIT course 5.07 Introduction to Biological Chemistry. “It turned into a fun experience of helping [undergraduate] students unleash their inner nerd,” Saebi notes.
Credits: Gretchen Ertl

Caption:
“Growing up in Iran, I never imagined I would have the opportunity to go to a world-renowned university such as MIT,” Azin Saebi says.
Credits:
Gretchen Ertl

Caption:
Outside of lab, Saebi has served as a teaching assistant for MIT course 5.07 Introduction to Biological Chemistry. “It turned into a fun experience of helping [undergraduate] students unleash their inner nerd,” Saebi notes.
Credits:
Gretchen Ertl

Azin Saebi was born and raised in Iran, emigrating to the U.S. with her family at 18 after graduating from high school. Now a fifth-year graduate student in chemistry, Saebi never intended to stay permanently; she initially expected to go back to Iran to attend university. With that in mind, when leaving for the U.S., she only packed a bag with enough belongings for a couple of months and had even booked a return flight.

Her plans changed, however, as she began to recognize the opportunities available to her at American colleges, and that the best way to improve her English would be to stay in the U.S. Since she hadn’t taken the SAT or completed the requirements necessary to enter a traditional four-year college, she enrolled in community college with a plan to study biology and neuroscience, before transferring to UCLA.

In community college, Saebi discovered that she loved her undergraduate chemistry courses, so she joined an inorganic chemistry lab. “I really clicked more with the day-to-day lab experiments in chemistry rather than biology. It was fun and exciting how I could take material A and material B, mix them together in a controlled way and get this new molecule,” she says. To her, “biology seemed like more of a black box. With chemistry, I could check the progress at every step along the way.”

At MIT, Saebi is working at the intersection of chemistry and biology, designing novel strategies to synthesize proteins and to conjugate proteins together. Ultimately, these strategies have potential applications as antimicrobial compounds. In addition to her academic pursuits, she has devoted her time to advocating for diversity and inclusion initiatives and ensuring that students feel supported and heard within the chemistry department.

Lighting a “fire of chemistry”

When she started at Saddleback Community College, Saebi first chose to pursue a degree in neuroscience, with the intention of becoming a physician — a path influenced by watching “Grey’s Anatomy,” she jokes. Taking organic chemistry also sparked an interest in the interface between chemistry and biology. A biochemistry course at UCLA further cemented this passion, and she found that she excelled in the subject. “It was rather obvious that among neuroscience majors, [my reaction] to the class was an uncommon one, as it was generally considered a pretty irrelevant class to our core studies,” she says.

Saebi decided to double major in neuroscience and biochemistry. An inspiring professor, Alexander Spokonyny, encouraged her to join his inorganic chemistry lab. “He was the person that lit this fire of chemistry in me,” she says. Under his guidance, she synthesized small-molecule inhibitors to study cocaine addiction.

In the fall of senior year, Saebi knew that she “wanted to pursue this research thing” and that her interest in medicine had taken a back seat. She decided to enroll in UCLA’s 4+1 program to complete a master’s degree in biochemistry before applying to graduate programs in chemistry.

When Saebi was admitted to MIT, she was determined to take advantage of the opportunity. “Growing up in Iran, I never imagined I would have the opportunity to go to a world-renowned university such as MIT,” she says. During the chemistry department’s visit weekend, where admitted students are invited to come to campus, she realized that students here “actually looked like me” in terms of the science they loved and the activities they were involved with.

Since beginning her PhD, Saebi’s aim has been to transition from organic chemistry to chemical biology. “Even though I enjoyed doing organic chemistry, I really wanted to pursue something with direct applications,” she notes. With this in mind, she decided to affiliate jointly with the labs of professor of chemistry Bradley Pentelute, and with Stephen Buchwald, the Camille Dreyfus Professor of Chemistry. The Buchwald lab focuses more on the organic chemistry methods, while the Pentelute lab focuses on peptides and emphasizes biological applications. “I really enjoyed making molecules, but I also knew that that alone would not keep me satisfied during the five years of my PhD,” Saebi explains. “I needed to make sure that I made something that I could apply to the biotechnology industry or to human health.”

The overall theme of Saebi’s work is developing novel chemical tools to modify biomolecules, specifically proteins. Her research has evolved in three distinct stages. First, she investigated a novel bioconjugation strategy, a chemical technique used to couple two proteins together. Then she worked on a method of synthesizing proteins via chemical ligation of amino acids, relying on chemical techniques to join the amino acids together instead of biological protein synthesis machinery. Most recently, Saebi has been combining these two tools, bioconjugation and chemical protein synthesis, to make antimicrobial compounds that specifically target and destroy Pseudomonas, a bacteria that can lead to serious infections in hospital patients.

Outside of lab, Saebi has served as a teaching assistant for course 5.07 (Introduction to Biological Chemistry). “It turned into a fun experience of helping [undergraduate] students unleash their inner nerd,” Saebi notes. “Given that I had really enjoyed my biochemistry classes back at UCLA, I really wanted to make sure that my students had the same experience.” She had to overcome her fear that, since English is her second language, students wouldn’t understand her explanations. Despite her initial hesitations, Saebi won the Department of Chemistry Outstanding Teaching Award in 2018. For her, that was “the cherry on top” of a rewarding teaching experience.

In the past two years, Saebi has become an advocate for diversity, inclusion, and speaking up about challenges within MIT, serving as a member of the chemistry department’s Diversity, Equity and Inclusion Committee (DEIC) and co-president of Women+ in Chemistry (WIC+). Over time, Saebi has realized that one of her personal strengths is communicating student needs, a skill she has leveraged in these leadership roles.

“Graduate school is hard, and nothing is going to make it an easy-breezy experience because science is inherently hard. But, there are things that can make graduate school a bit easier and a more enjoyable experience. … Often we have the attitude that we will just suffer through it just because others before us have suffered through it, and that’s a problem” she says. Saebi is not content to just suffer through it; instead, she is determined to be the spark for change.

She is most proud of the holistic review of graduate admissions practices drafted by DEIC and implemented in chemistry admissions this year. The new practices evaluate candidates based on opportunities available to them, and their potential for growth, as well as their accomplishments.

She also serves with Resources for Easing Friction and Stress in the Chemistry Department (ChemREFS), which offers students an avenue to speak confidentially about their problems and to receive support. Learning about her peers’ struggles has informed her role in the DEIC, she says. “ChemREFS is helpful to me to ensure that I am actually representing the student body and the diversity of voices and perspectives.”

As she nears graduation, Saebi has been considering her next steps. She wants to continue solving problems in human health, and she understands that it can be a challenging and lengthy process translating academic research to new treatments for patients. “I want to be somewhere that I can see the impact of my work on patients’ lives and health care more immediately, and I’m grateful that my PhD at MIT has opened so many doors for me to explore science beyond academia,” she says.