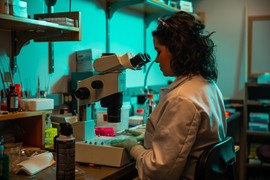 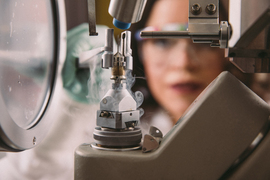 ↓ Download Image
Caption: Backman’s use of X-ray crystallography has helped her produce atomic models that shed light on the structure of these proteins.
Credits: Image: Jake Belcher

Caption:
Backman’s use of X-ray crystallography has helped her produce atomic models that shed light on the structure of these proteins.
Credits:
Image: Jake Belcher

Raised in Tampa, Florida, Lindsey Backman takes pride in her family’s history and its role in the vibrant Cuban American community there. She remembers the weekends she would spend as a kid, getting café con leche with her grandparents and dancing in the studio with her friends. The cultural experiences she shared with friends, family, and neighbors helped her feel comfortable being herself while growing up, and showed her from an early age how valuable a welcoming community could be to a person’s success.

Backman went on to pursue her BS in chemistry at the University of Florida. Surrounded by a diverse community, she felt supported as she leaned deeper into her interest in science. She was soon nominated to a program that matched students from underrepresented backgrounds in STEM with a university professor to pursue a summer research project. Although Backman was still uncertain about going to another university to do lab research, with encouragement from her department she gave the program a chance.

Backman matched with Professor Catherine Drennan at MIT to work on visualizing structural biology and took part in the MIT Summer Research Program in Biology (MSRP-Bio). The research clicked with her immediately and became a turning point; Backman returned to participate in the lab the following summer and then applied to graduate school.

“Getting nominated to the program changed my life. I certainly wouldn’t have applied to MIT otherwise,” says Backman. “At first, I was convinced I wouldn’t fit in, but soon found myself surrounded by people as passionate about science as I was. I knew I was in the right place.”

Uncovering secrets about the human microbiome

Today, Backman is a graduate student in the Drennan lab and researches the chemistry of the human microbiome, a collection of gut microbes essential to sustaining the body. Backman is interested in how certain bacteria can outcompete other strains by producing unique proteins that process abundant nutrients or repair broken enzymes. Her use of X-ray crystallography has helped her produce atomic models that shed light on the structure of these proteins.

One type of protein Backman and her team have characterized is called a spare part protein. When produced, this protein can help restore a broken enzyme’s ability to catalyze essential reactions. “When fixing a car with a flat tire, you would replace the tire and not the whole car. A similar strategy is being used here. These spare-part proteins act to bind and restore the activity of the enzyme completely,” she says.

Over the years, Backman has seen the depth of questions surrounding the microbiome grow. Scientists have begun to recognize how important the microbiome is to human health. “Ever since my first summer research experience at MIT, I’ve been dedicated to studying this one unique repair mechanism,” says Backman. “We’ve gone from solving the structure of the proteins to now understanding how the mechanism works. But there’s still so much more to learn — we have started to suspect these repair mechanisms speak to a broader motif in other enzymes as well.”

Backman and her team have also been leaders in characterizing how an important enzyme, called hydroxy-L-proline dehydratase (HypD), performs its unusual chemistry. This abundant enzyme takes hydroxyproline, a common nutrient in the gut, and can obtain a competitive advantage by using it as a nutrient and source of energy.

“Only a unique subset of bacteria can process hydroxyproline. On the clinical side, we have seen during infection that virulent bacteria with this ability, such as C. difficile, will start rapidly consuming hydroxyproline to proliferate,” says Backman. “Conversely, we could one day create antibiotics that specifically inhibit HypD without killing our beneficial bacteria.”

Encouraging the future of science

Outside of her research, Backman cares deeply about serving and being a part of the Latinx community on campus. She helped co-found the MIT Latinx Graduate Student Association and has served for four years as a graduate resident assistant for La Casa, the Latinx undergraduate living community at New House. “La Casa is a really tight-knit and familial community,” says Backman. “Some of our original freshmen are now seniors, so it’s been really rewarding to see their whole transition throughout college. I love getting to watch students explore and come to realize what they’re passionate about.”

Backman has also been instrumental in spurring equity initiatives on campus. She is currently a student representative for the MIT Department of Chemistry Diversity, Equity, and Inclusion Committee and has worked to implement programs that support the success of underrepresented groups on campus. Her five years of service as an MIT Chemistry Access Program mentor have encouraged many underrepresented undergraduate students to pursue chemistry graduate programs. For all her hard work at improving MIT’s campus, Backman recently received the Hugh Hampton Young Fellowship.

In the future, Backman aspires to continue researching the microbiome and mentoring students by becoming a professor. She hopes to continue the cycle and inspire more young scientists to recognize their inner potential. “I was never one of those kids that knew I wanted to be a scientist someday. My PI completely changed my life, and I would not be at MIT today without her,” she says. “Having mentors that believe in you at critical points in your life can make all the difference.”

“I think there’s this wrong assumption that diversity initiative work takes away from time that could be spent doing science. In my mind, we need to recognize how these things go hand in hand,” says Backman.

“The only way we’re going to get the best scientists is by creating a healthier, more diverse environment where people of all backgrounds feel welcomed. It’s only when people feel comfortable that they can make their greatest contributions to the field.”

In his element in the chem lab and the kickboxing ring

Bacterial enzyme could become a new target for antibiotics