Bacterial enzyme could become a new target for antibiotics

Scientists discover the structure of an enzyme, found in the human gut, that breaks down a component of collagen.
Anne Trafton | MIT News Office
Publication Date:
Press Inquiries 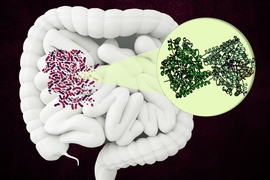 ↓ Download Image
Caption: MIT researchers have discovered the structure of an unusual enzyme that some microbes use to break down a component of collagen in the human gut.
Credits: Image: Christine Daniloff, MIT

Caption:
MIT researchers have discovered the structure of an unusual enzyme that some microbes use to break down a component of collagen in the human gut.
Credits:
Image: Christine Daniloff, MIT

MIT and Harvard University chemists have discovered the structure of an unusual bacterial enzyme that can break down an amino acid found in collagen, which is the most abundant protein in the human body.

The enzyme, known as hydroxy-L-proline dehydratase (HypD), has been found in a few hundred species of bacteria that live in the human gut, including Clostridioides difficile. The enzyme performs a novel chemical reaction that dismantles hydroxy-L-proline, the molecule that gives collagen its tough, triple-helix structure.

Now that researchers know the structure of the enzyme, they can try to develop drugs that inhibit it. Such a drug could be useful in treating C. difficile infections, which are resistant to many existing antibiotics.

“This is very exciting because this enzyme doesn’t exist in humans, so it could be a potential target,” says Catherine Drennan, an MIT professor of chemistry and biology and a Howard Hughes Medical Institute Investigator. “If you could potentially inhibit that enzyme, that could be a unique antibiotic.”

The HypD enzyme is part of a large family of proteins called glycyl radical enzymes. These enzymes work in an unusual way, by converting a molecule of glycine, the simplest amino acid, into a radical — a molecule that has one unpaired electron. Because radicals are very unstable and reactive, they can be used as cofactors, which are molecules that help drive a chemical reaction that would otherwise be difficult to perform.

These enzymes work best in environments that don’t have a lot of oxygen, such as the human gut. The Human Microbiome Project, which has sequenced thousands of bacterial genes from species found in the human gut, has yielded several different types of glycyl radical enzymes, including HypD.

In a previous study, Balskus and researchers at the Broad Institute of MIT and Harvard discovered that HypD can break down hydroxy-L-proline into a precursor of proline, one of the essential amino acids, by removing the hydroxy modification as a molecule of water. These bacteria can ultimately use proline to generate ATP, a molecule that cells use to store energy, through a process called amino acid fermentation.

HypD has been found in about 360 species of bacteria that live in the human gut, and in this study, Drennan and her colleagues used X-ray crystallography to analyze the structure of the version of HypD found in C. difficile. In 2011, this species of bacteria was responsible for about half a million infections and 29,000 deaths in the United States.

Removing a hydroxy group is usually a difficult reaction that requires a large input of energy.

“By transferring a radical to hydroxy-L-proline, it lowers the energetic barrier and allows for that reaction to occur pretty rapidly,” Backman says. “There’s no other known enzyme that can perform this kind of chemistry.”

It appears that once bacteria perform this reaction, they divert proline into their own metabolic pathways to help them grow. Therefore, blocking this enzyme could slow down the bacteria’s growth. This could be an advantage in controlling C. difficile, which often exists in small numbers in the human gut but can cause illness if the population becomes too large. This sometimes occurs after antibiotic treatment that wipes out other species and allows C. difficile to proliferate.

“C. difficile can be in your gut without causing problems — it’s when you have too much of it compared to other bacteria that it becomes more problematic,” Drennan says. “So, the idea is that by targeting this enzyme, you could limit the resources of C. difficile, without necessarily killing it.”

The researchers now hope to begin designing drug candidates that could inhibit HypD, by targeting the elements of the protein structure that appear to be the most important in carrying out its function.

The research was funded by the National Institutes of Health, a National Science Foundation Graduate Research Fellowship, Harvard University, a Packard Fellowship for Science and Engineering, the NSERC Postgraduate Scholarship-Doctoral Program, an Arnold O. Beckman Postdoctoral Fellowship, a Dow Fellowship, and a Gilliam Fellowship from the Howard Hughes Medical Institute.