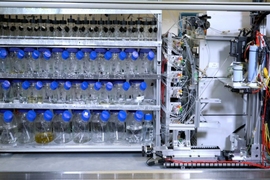 ↓ Download Image
Caption: MIT chemists have developed a protocol to rapidly produce protein chains up to 164 amino acids long. The flow-based technology could speed up drug development and allow scientists to design novel protein variants incorporating amino acids that don’t occur naturally in cells. The automatic tabletop machine, pictured here, is nicknamed the “Amidator” by the research team.
Credits: Courtesy of the researchers

Caption:
MIT chemists have developed a protocol to rapidly produce protein chains up to 164 amino acids long. The flow-based technology could speed up drug development and allow scientists to design novel protein variants incorporating amino acids that don’t occur naturally in cells. The automatic tabletop machine, pictured here, is nicknamed the “Amidator” by the research team.
Credits:
Courtesy of the researchers

Many proteins are useful as drugs for disorders such as diabetes, cancer, and arthritis. Synthesizing artificial versions of these proteins is a time-consuming process that requires genetically engineering microbes or other cells to produce the desired protein.

MIT chemists have devised a protocol to dramatically reduce the amount of time required to generate synthetic proteins. Their tabletop automated flow synthesis machine can string together hundreds of amino acids, the building blocks of proteins, within hours. The researchers believe their new technology could speed up the manufacturing of on-demand therapies and the development of new drugs, and allow scientists to design artificial proteins by incorporating amino acids that don’t exist in cells.

“You could design new variants that have superior biological function, enabled by using non-natural amino acids or specialized modifications that aren’t possible when you use nature’s apparatus to make proteins,” says Brad Pentelute, an associate professor of chemistry at MIT and the senior author of the study.

In a paper appearing today in Science, the researchers showed that they could chemically produce several protein chains up to 164 amino acids in length, including enzymes and growth factors. For a handful of these synthetic proteins, they performed a detailed analysis showing their function is comparable to that of their naturally occurring counterparts.

The lead authors of the paper are former MIT postdoc Nina Hartrampf, who is now an assistant professor at the University of Zurich, MIT graduate student Azin Saebi, and former MIT technical associate Mackenzie Poskus.

The majority of proteins found in the human body are up to 400 amino acids long. Synthesizing large quantities of these proteins requires delivering genes for the desired proteins into cells that act as living factories. This process is used to program bacterial or yeast cells to produce insulin and other drugs such as growth hormones.

“This is a time-consuming process,” says Thomas Nielsen, head of research chemistry at Novo Nordisk, who is also an author of the study. “First you need the gene available, and you need to know something about the cellular biology of the organism so you can engineer the expression of your protein.”

An alternative approach for protein production, first proposed in the 1960s by Bruce Merrifield, who was later awarded the Nobel Prize in chemistry for his work on solid-phase peptide synthesis, is to chemically string amino acids together in a stepwise fashion. There are 20 amino acids that living cells use to build proteins, and using the techniques pioneered by Merrifield, it takes about an hour to perform the chemical reactions needed to add one amino acid to a peptide chain.

In recent years, Pentelute’s lab has invented a more rapid method to perform these reactions, based on a technology known as flow chemistry. In their machine, chemicals are mixed using mechanical pumps and valves, and at every step of the overall synthesis they cycle through a heated reactor containing a resin bed. In the optimized protocol, forming each peptide bond takes on average 2.5 minutes, and peptides up to 25 amino acids long can be assembled in less than an hour.

Following the development of this technology, Novo Nordisk, which makes several protein drugs, became interested in working with Pentelute’s lab to synthesize longer peptides and proteins. To achieve that, the researchers needed to improve the efficiency of the reactions that form peptide bonds between amino acids in the chain. For each reaction, their previous efficiency rate was between 95 and 98 percent, but for longer proteins, they needed it to be over 99 percent.

“The rationale was if we got really good at making peptides, we could expand the technology to make proteins,” Pentelute says. “The idea is to have a machine that a user could walk up to and put in a protein sequence, and it would string together these amino acids in such an efficient manner that at the end of the day, you can get the protein you want. It’s been very challenging because if the chemistry is not close to 100 percent for every single step, you will not get any of the desired material.”

To boost their success rate and find the optimal recipe for each reaction, the researchers performed amino-acid-specific coupling reactions under many different conditions. In this study, they assembled a universal protocol that achieved an average efficiency greater than 99 percent for each reaction, which makes a significant difference when so many amino acids are being linked to form large proteins, the researchers say.

“If you want to make proteins, this extra 1 percent really makes all the difference, because byproducts accumulate and you need a high success rate for every single amino acid incorporated,” Hartrampf says.

Using this approach, the researchers were able to synthesize a protein that contains 164 amino acids — Sortase A, a bacterial protein. They also produced proinsulin, an insulin precursor with 86 amino acids, and an enzyme called lysozyme, which has 129 amino acids, as well as a few other proteins. The desired protein has to be purified and then folded into the correct shape, which adds a few more hours to the overall synthesis process. All of the purified synthesized proteins were obtained in milligram quantities, making up between 1 and 5 percent of the overall yield.

The researchers also tested the biological functions of five of their synthetic proteins and found that they were comparable to those of the biologically expressed variants.

The ability to rapidly generate any desired protein sequence should enable faster drug development and testing, the researchers say. The new technology also allows amino acids other than the 20 encoded by the DNA of living cells to be incorporated into proteins, greatly expanding the structural and functional diversity of potential protein drugs that could be created.

“This is paving the way for a new field of protein medicinal chemistry,” Nielsen says. “This technology really complements what is available to the pharmaceutical industry, providing new opportunities for rapid discovery of peptide- and protein-based biopharmaceuticals.”

The researchers are now working on further improving the technology so that it can assemble protein chains up to 300 amino acids long. They are also working on automating the entire manufacturing process, so that once the protein is synthesized, the cleavage, purification, and folding steps also occur without any human intervention required.

Pentelute is a co-founder of a company called Amide Technologies that has licensed aspects of the peptide synthesis technology for possible commercial development. The research was funded by Novo Nordisk, a National Science Foundation Graduate Research Fellowship, and an MIT Dean of Science Fellowship.

Chemists synthesize millions of proteins not found in nature