Up for a challenge in the lab and on the mat 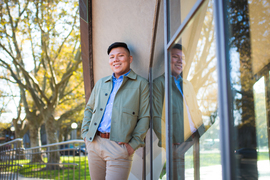 ↓ Download Image
Caption: Jose Aceves-Salvador, an MIT senior studying biology with a concentration in education, has been hooked on research since his first lab experience. “I love the learning process, and in biology there’s a never-ending cycle of questions to explore, as well as opportunities to learn from failures and successes along the way,” he says.
Credits: Photo: Gretchen Ertl

Caption:
Jose Aceves-Salvador, an MIT senior studying biology with a concentration in education, has been hooked on research since his first lab experience. “I love the learning process, and in biology there’s a never-ending cycle of questions to explore, as well as opportunities to learn from failures and successes along the way,” he says.
Credits:
Photo: Gretchen Ertl

At 5:30 a.m., his alarm would start blaring. Reluctant to get up, Jose Aceves-Salvador would hear his parents outside his door, bustling to get ready for work. “Ponte las pilas!” they would shout, using a Spanish idiom expressing encouragement to work hard.

The expression would stick with Aceves-Salvador throughout high school as he dreamed of going to college. Although neither of his parents had college degrees, they were both huge supporters of his decision. As Mexican immigrants who had moved to Los Angeles in their youth, their goal was to see their son achieve a better future.

“They didn’t know much about applying to college, but they knew that when you go, you’re set up for life,” explains Aceves-Salvador. “Whenever I’d hit a low, I’d think of how they’d tell me to work hard and keep going.”

To get a first taste of campus life, Aceves-Salvador attended a program at MIT called Minority Introduction to Engineering and Science (MITES) during the summer before his junior year of high school. MITES allowed Aceves-Salvador to take a genomics class at the Broad Institute of MIT and Harvard. The experience exposed him to the exciting and ever-changing world of scientific research.

“After MITES was over, I knew I wanted to go back to MIT. There was so much I still wanted to learn and explore,” Aceves-Salvador says. “In my mind, MIT was a huge reach school. But I couldn’t let go of the goal and figured I’d apply anyway.”

Aceves-Salvador was admitted and is now a senior studying biology with a concentration in education. “I love the learning process, and in biology there’s a never-ending cycle of questions to explore,” he says enthusiastically. “There are also so many opportunities to learn from failures and successes along the way.”

Aceves-Salvador wanted to do research the moment he arrived on campus, but struggled to get a lab position without any prior experience. Fortunately, in his sophomore year an interview with Xun Gong, a postdoc with the Strano Research Group, led to an opportunity. The lab had recently observed a new phenomenon in single-walled carbon nanotubes and wanted to investigate further. Aceves-Salvador joined the group and led the side project with Gong’s mentorship. “The project, and the fact that we were going into the unknown and exploring a new phenomenon perfectly fit my mentality, so I immediately said yes,” says Aceves-Salvador. “I eventually got my first taste of real science and have been hooked ever since.”

Since his first project, Aceves-Salvador has continued to do research, in multiple MIT labs and at the University of California at Los Angeles one summer. He has enjoyed working on everything from modeling protein behavior to developing a gut microphysical system. “As a college student, you come in barely knowing what’s out there to explore. I’ve tried to use my undergraduate degree to learn more about biology as a field before committing to something,” he says.

Across his different lab experiences, Aceves-Salvador has noted the lack of Latinx representation in science. He is devoted to encouraging greater minority representation in STEM and has served as a teaching assistant and mentor for MITES and the MIT Leadership Training Institute. These roles have allowed him to share his empowering story and love for education by teaching others. “I really wouldn’t be here if it weren’t for programs like MITES. I’m so grateful I can give back and be part of its legacy,” Aceves-Salvador says.

For an afterschool program he led in Los Angeles, Aceves-Salvador shaped the science curriculum he teaches to be more exciting to young learners. Students were challenged through hands-on activities, like creating chemical reactions, to make their own observations. “At a young age you’re so curious and curiosity is what science is all about,” says Aceves-Salvador. “But oftentimes, this curiosity gets stifled through outside pressures. In the hands-on activities I help lead, I try to create an open environment that encourages students to feel comfortable asking questions.”

Aceves-Salvador noticed the same approaches being used abroad during his international teaching experiences. Through MISTI Global Teaching Labs, he has traveled to Spain and Mexico to teach biology, math, health sciences, and chemistry. In Spain, Aceves-Salvador got to lead a discussion with local teachers on how to approach and encourage STEM education. “At least in the school I was placed in, I saw greater opportunities for students to explore different corners of science in their projects,” he notes. “The community-centric classrooms were also more focused on discussion among the students and less lecture.”

Outside of teaching and research, Aceves-Salvador enjoys channeling his passionate energy into dance and cheer. He has been part of MIT Cheerleading and DanceTroupe. These activities have pushed him physically, for example training him to lift cheerleaders on his shoulders and throw them into the air. He credits the intense nature of workout routines for creating a deep communal bond between members. “You share a connection with people after they’ve seen you fall on your face,” he jokes. “You can’t really hide anything at that point.”

This fall, Aceves-Salvador will be attending Harvard Medical School to pursue a PhD through the Biological and Biomedical Sciences program. He looks forward to continuing to explore different realms in science, as well as encouraging other young minority students to do the same. “Growing up, I never expected myself to be here in this position today. Even when I actually got into MIT, I faced a lot of pushback. People questioned my abilities and attributed my successes to luck,” Aceves-Salvador explains.

“It took me four years to leave that mentality. Now, I want to be a driving force to change that stigma. I want people to know that the reason we’re here is because we deserve to be here. And we’re going to do big things just like anyone else.”

In his research, the geomorphologist seeks connections among landscape evolution, biodiversity, and human history.

Current and former MIT researchers find novel tools can improve the sustainability of road networks on a limited budget.

Citizens emerge from the slums

PhD student Ying Gao's research reveals that the urban poor in the developing world are politically engaged and capable of effecting change.