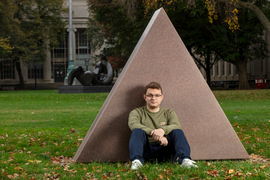 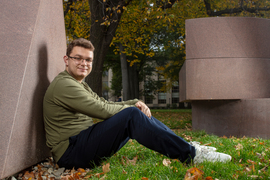 ↓ Download Image
Caption: “As a kid, I’d ask so many questions that were often dismissed or seen as crazy,” Barotta says. “Learning more and more has been fulfilling, because I’ve finally been able to have responses to those curious questions. For me, education has been a way to answer curiosity.”
Credits: Image: M. Scott Brauer

Caption:
“As a kid, I’d ask so many questions that were often dismissed or seen as crazy,” Jack-William says. “Learning more and more has been fulfilling, because I’ve finally been able to have responses to those curious questions. For me, education has been a way to answer curiosity.”
Credits:
Image: M. Scott Brauer

It was 9 p.m. on a Monday night during the spring of his first year at MIT. To Jack-William Barotta, this meant one thing — Physics Day. He had just taken on a tutoring role in the Office of Minority Education’s Talented Scholars Resource Room (TSR^2), and was sitting patiently in the classroom, waiting to tutor any students who arrived with questions.

Eventually, a student came up to him frustrated with a problem set. Jack-William had never seen the question before. There was no answer key. But he soon found himself working alongside his student, trying and encouraging new ways to solve the problem.

When they finally succeeded, Jack-William made sure to let his student know why the equation was important — how the formulas from the page could be used to describe everything from wind patterns to water ripples. He watched with joy as his student’s eyes lit up, thinking about the natural world in a different way.

“Tutoring is really just two people, together on a mission to solve the problem. The older I get, the more I see that there’s so many ways what you learn in introductory classes is applied later down the road,” he says. “I try to show students what they learned and how they’ll use it later to describe the world around them.”

Jack-William, a senior majoring in mathematics, has long believed in the power and importance of education. He comes from a low-income background and is a first-generation college student. With no internet in his home, he applied to MIT from a nearby McDonald’s. “I didn’t know MIT was a thing until around my junior year of high school. The idea of going far away from home was considered a very odd to think about,” he says.

While he didn’t know what the future looked like after high school, Jack-William never stopped sharing his curiosity with others. He credits his close relationships with his chemistry, physics, and math teachers back in his Florida high school for first getting him excited about STEM. Even back then, Jack-William would often help tutor his peers, supplementing his school’s limited AP physics curriculum with his own outside reading.

“As a kid, I’d ask so many questions that were often dismissed or seen as crazy,” he says. “Learning more and more has been fulfilling, because I’ve finally been able to have responses to those curious questions. For me, education has been a way to answer curiosity.”

In order to ease his transition to MIT, Jack-William attended a precollege scholar enrichment program called Interphase EDGE, also organized by the Office of Minority Education (OME). The program not only educated him about MIT’s resources, but also helped him meet future friends. “A lot of us had crazy life experiences to get to where we were. By allowing each of us to share with one another, our stories made us mutually feel ready to take on MIT,” he says.

Jack-William knew immediately after Interphase EDGE ended that he wanted to stay involved with the program. He has been a teaching assistant (TA) for the last three summers, helping rising students as both a mentor and a friend. Through that experience, which included hangouts and walking trips around Boston, he has grown close with a number of the students assigned to his cluster.

“My whole heart is in that job. It’s nonstop. It’s not just teaching, it’s also playing soccer with them, if that’s what they need. Teaching them how to balance their time. Being there for them. We really grew to be a family and still video call almost every day,” he says.

In addition to his OME activities, Jack-William has continued to pursue his passion for teaching by working as a TA for 18.02 (Multivariable Calculus) in the Department of Mathematics. While he has had to adjust to teaching remotely, he still strives to make sure every student feels seen and heard. At the end of recitations, he makes sure to survey his students about the class, using their feedback to refine and improve each lecture. He has even implemented a Discord channel to share interesting math applications, as well as encouraged class participation by starting lessons with a fun poll.

“I don’t get to rant at the blackboard with chalk anymore, which is a bummer,” Jack-William jokes. “But online we’ve found ways to save notes and add in more multimedia components. It’s been an adjustment, but I try to keep it in good stride.”

In between grading papers and teaching classmates, Jack-William finds time to pursue research interests of his own. His primary interest is fluid mechanics, the process of unraveling the deceivingly simple question of how liquids move. “We see fluid instabilities every day, but we don’t think much of them. For example, what would happen if you took a sheet layered with thick, silicone oil, turned it upside down, and started shaking it? When would droplets start to form?” he ponders.

He has also applied his fascination with fluids to studying ice streams in Antarctica. Jack-William and others in the Glacier Dynamics and Remote Sensing Group in the Department of Earth, Atmospheric and Planetary Sciences are creating mathematical models to understand how glaciers melt, in order to better predict future sea level rise.

“You start with fundamental equations, like conservation of energy, mass, or momentum.  And from those three things, you have a way to describe how much water might be produced. It’s been really interesting to work on such an important real-world problem,” he says.

Just as Jack-William believes in the potential of his students, he thanks his many researcher mentors for believing in him. From long office hours conversations to countless Zoom meetings, his many high school and undergraduate teachers have strengthened his love for knowledge, he says. “My mentors have done so many things they didn’t ever have to do, just for the sake of helping me. I will always be thankful for that.” He also credits his mother and sister for their lifelong support.

Jack-William is currently applying to PhD programs, where he hopes to gain an even deeper understanding of fluid mechanics. He has been prioritizing labs that show a focus not only in novel research, but also in community outreach.

“The problem with STEM and differences in economic status are that they lead to students becoming discouraged early on,” he says. “I think it’s important that academics hold fun events and free lectures for local middle and high schoolers.”

In the future, Jack-William aspires to become a professor and leverage his position to advocate for more initiatives around inclusivity and diversity. He sees teaching as his way of giving back to his community, as well as encouraging the next generation of learners.

“I think the whole reason I got interested in this field was because of great postdocs and instructors,” he says. “Hopefully, when I’m in grad school, I can also be that supportive person that’s helping them through the research process.”

“I want to keep giving back in the future. And I hope, as an academic, I can inspire and talk to young students — to show them how cool STEM is and to not give up. It’s the only way STEM can continue.”

From culinary arts to nuclear engineering