Senior Alberto Naveira has found himself and his community as a member of the a cappella group the Chorallaries.
Hannah Meiseles | MIT News correspondent
Publication Date:
Press Inquiries 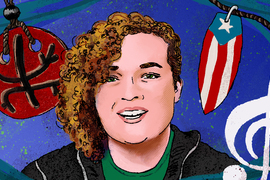 ↓ Download Image
Caption: “I always knew that MIT would be a great place for me to grow as a researcher. But I never expected to grow as a musician, a tutor, a friend, and a person in general,” says senior and biological engineering major Alberto Naveira.
Credits: Image: Jose-Luis Olivares, MIT 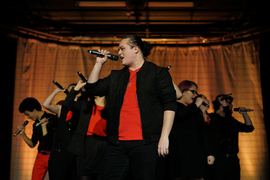 ↓ Download Image
Caption: Performing with the a capella group the Chorallaries of MIT, Naveira, middle, was the lead singer for the ICCA Set opener, “Still Feel,” in Fall 2019.
Credits: Courtesy of Alberto Naveira

Caption:
“I always knew that MIT would be a great place for me to grow as a researcher. But I never expected to grow as a musician, a tutor, a friend, and a person in general,” says senior and biological engineering major Alberto Naveira.
Credits:
Image: Jose-Luis Olivares, MIT

Caption:
Performing with the a capella group the Chorallaries of MIT, Naveira, middle, was the lead singer for the ICCA Set opener, “Still Feel,” in Fall 2019.
Credits:
Courtesy of Alberto Naveira

It was his first week on campus, and like most first-year students, Alberto Naveira felt overwhelmed. On top of the usual college fears, he felt trapped between two worlds — his familiar, small, Catholic high school in Puerto Rico versus his new life as an MIT student in Cambridge.

To regain a sense of comfort, Naveira chose to stick with the things he knew well. He spent his time with other Puerto Rican students. He declared a major in biological engineering to continue pursuing his lifelong goal of being a physician. Throughout the transition, Naveira held on to his past to stay grounded. “I was never the type of person to try new things. Suddenly, here I was in a completely different environment, language, and culture. I didn’t know what to do,” he recalls.

As the year went on, Naveira watched as his Puerto Rican classmates grew apart to find new groups of their own. Yet, he struggled to decide where he belonged. By the time he was a sophomore, Naveira knew he was lonely and needed a change. He thought back to high school, during moments when he felt most connected to a community. Most of these memories revolved around singing in his school’s choir. He realized he could revisit his passion by devoting himself to the Chorallaries of MIT, the Institute’s oldest co-ed student a capella group.

After joining, Naveira realized that getting to know members would require him to become more than just a performer. When the president position became available, Naveira realized this was his chance to step up. The demanding role immediately required him to spend countless hours with the group. “I started to feel closer to the others after we spent a good deal of time together coordinating performances. It was through these troubleshooting challenges that we began to actually bond,” he says.

As president, Naveira sought to make important changes to help newcomers like himself feel more welcomed. Along with planned social events, he focused on encouraging more casual get-togethers. “We would often go to the dining halls to catch dinner or brunch together. After performances, I always made sure that we’d acknowledge our accomplishments by having a celebration together,” he says. “They were little things, but I think they allowed us to become closer.”

Naveira also united members by facilitating conversations about the group’s shared traditions and values. When members advocated for new ideas, Naveira found himself championing their causes. “It was brought to my attention that our traditional song had lyrics that were heteronormative and lacked consent. There were also unnecessarily strict rules for the male performance dress code. By talking it through, we were able to make changes that were both fair and true to our customs.”

Throughout the year, Naveira began to see changes in himself as he developed into the role. He found himself speak up without fear, eager to listen and share his ideas. He was finally breaking out of his shell. “It took a while before I was able to confidently go in front of older members and make decisions. But the more time I spent on it, the better I got at projecting myself,” he says.

While coordinating the group came with challenging moments, Naveira grew to truly appreciate teamwork over singing solo. “There’s something to be said about living music as a social experience,” he says. “Like when you make eye contact with someone during a performance and there’s this shared intense emotion. It’s unlike anything else. You can’t have that on your own.”

Today, Naveira continues to be part of the Chorallaries as a performer, arranger, and audio mixer. Although he now feels at home at MIT, Naveira acknowledges that the process took dedication and self-discovery. He tries to spread this message to other struggling students he tutors through the Talented Scholars Resource Room (TSR^2) in the Office of Minority Education. “As I dug deeper into the communities that shared my interests, I started to feel more at home here,” he shares. “I try to emphasize this to my students whenever I can. If you feel like you haven’t found your place yet, it just takes some time.”

Naveira has also used his time in college to expand his original academic interest in medicine. He says the variety in his courses has shown him new ways of thinking, as well as career alternatives to becoming a physician. His favorite course, 20.309 (Instrumentation and Measurement for Biological Systems), encouraged him to investigate biology by applying principles from other engineering disciplines. “The interdisciplinary nature of the class showed me how medicine expands into other fields. We learned how something like signal processing can be applied to everything from medicine to music,” says Naveiro. “It blew my mind and made me rethink what I know.”

Over the past few months, Naveira has focused less on sticking to a defined path and more on pursuing what he loves. Stepping beyond music performance, he is currently pursuing a second bachelor’s degree in music production at Berklee College of Music. His new skills were used to arrange the Chorallaries’ most recent virtual performance, which won first place in the 2021 ICAA Northeastern Quarterfinal. Naveira plans on continuing to pursue music even after graduation. “Regardless of where I end up, I’m certain that I’ll never be happy unless music is part of my life. It’s something I truly value,” he says.

He also remains open to all types of career paths in medicine. Naveira loves the idea of continuing to apply knowledge from different disciplines to rethink medical problems. “The more I learn, the harder it is to choose a career in a specific field,” Naveira explains. “That’s something I never expected. I always knew that MIT would be a great place for me to grow as a researcher. But I never expected to grow as a musician, a tutor, a friend, and a person in general.”

“This past year has shown me that nothing is guaranteed. Life will always be full of uncertainty and I’ll be forced to try new things. But I feel that, with the right people by my side, I can handle anything.”

Featured video: Making music with the Chorallaries of MIT