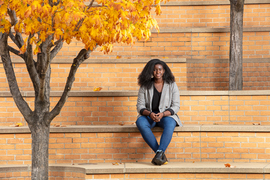 As a kid, Andrea Orji always loved it when her grandpa would visit from Nigeria. He would share stories about his home to teach Orji, a Texas native, about her family’s heritage.

But while she and her family attended school and work, her grandpa remained at the house, frequently alone. She could tell he longed to return to the familiarity of his own country, yet he remained in order to undergo and then recover from cataract surgery. Later on, treatment for other conditions would require him to travel back and forth for months at a time. Despite the inconvenience, the quality of care in Texas was better than what was available to him in Nigeria.

Orji noticed visits by many of her other Nigerian relatives also coincided with medical procedures. Why was it better for her family members to fly halfway around the world for a necessary surgery? The question weighed heavily on Orji’s mind.

As she began applying to colleges, Orji decided that she wanted to study biomedical engineering in order to create more affordable, globally available medical devices and procedures. Unlike her three older siblings, who chose to stay in Texas, Orji hoped to attend college out of state. She also knew she wanted to travel internationally and eventually live and work in Nigeria. “It was important for me to get out of my comfort zone and think about how I would deal with settling somewhere completely new,” she says.

The search ended when Orji found MIT. Its international education program, the MIT International Science and Technology Initiatives (MISTI), provided plenty of opportunities for her to explore her interest in working overseas. While there were no programs available in Nigeria, Orji says she was amazed at the variety of destinations where she could study and explore future careers.

Orji is now a senior studying chemical engineering with a focus in biomedical applications and interests in global health. She has studied and worked abroad in Brazil, South Africa, and India, and credits these global experiences for giving her new perspectives on her Nigerian roots, while also teaching her new solutions to tackle ever-pressing global health challenges.

During her third year, Orji worked through MISTI Global Teaching Lab to introduce biology and chemistry labs to an all-girls summer program in Brazil. While the trip was a far distance from Nigeria, Orji found herself discovering aspects of West African history. “At the time, I didn’t know that Brazil has such a large Afro-Brazilian population. Many of Brazil’s traditions, such as Carnival, are actually influenced by Afro-Brazilian music and costumes,” she says. “It got me thinking more about Black populations around the world and the different ways I can serve them.”

Later that same year, Orji traveled through MISTI to Hyderabad, India, and conducted public health research at a local hospital, LV Prasad Eye Institute. She witnessed firsthand how health disparities differ between regions in a country. While Orji explored India with fresh eyes, Nigeria was still on her mind. “I kept thinking about the influence of colonialism on both countries and how they have similar decentralized health care systems,” she says. “It led me to wonder if the methods used by LVPEI’s hospitals to improve accessibility could also be applied in Nigeria.”

Her idea to implement health solutions between countries was reaffirmed throughout her internship. “The physician I shadowed would collaborate with other doctors to ensure interactions with patients were respectful of the patients’ culture, language, and religion,” she explains. “This is something we still struggle with in America. But at LVPEI, accommodating for patient differences is seamlessly engrained in hospital practice. I think these teachings could be applied everywhere.”

The trip had a lasting impact on Orji; she switched gears and became certain she also wanted to be a doctor. “At the end of a full day of seeing patients, sometimes I’d tear up. The way the hospital prioritized care for everyone, regardless of income or background, was mind-blowing to me. They managed to combine all the things I had been thinking about. I knew that this was what I wanted to do.”

While the pandemic has paused Orji’s international travels, she has continued to study health disparities outside of her community, through a remote internship helping to digitize contact-tracing in Navajo Nation, which has been hit with a disproportionate number of Covid-19 cases. Since last summer, Orji has been part of a team working to implement a contact-tracing app; her role includes helping to bridge the communication gap between the app development team and local health care workers.

“A lot of failings happen when you don’t adapt the technology to consider its users. For example, the app would ask the user if they had been in contact with someone at a hotel, even if there were no hotels in the area,” she says. “Any time saved on the app was critical for contact tracers, who often had many other responsibilities. We had to really understand the local population so the app could be efficient for both users and researchers.”

Orji also credits her favorite class, 10.495 (Molecular Design and Bioprocess Development of Immunotherapies), for teaching her about how to adapt medical innovations to local communities. “We studied the complications that come from translating technologies created in higher-income countries to lower-income countries,” she says. “I loved how it taught process design while also considering political challenges that I had struggled to incorporate from my minor classes, such as Africa and the Politics of Knowledge. I think that understanding the disparities in a system can help physicians advocate for their patients better.”

Orji also loves to explore the world through dance. Since arriving to MIT, she has been a dancer and choreographer for Sakata Afrique, an Afro-Caribbean dance group. Dancing has not only introduced Orji to other students from Africa and its diasporas but also expanded her knowledge of other African cultures. “Each region has its own unique moves, so I love to create with other members and bring their ideas together into one dance,” she says.

With graduation quickly approaching, Orji has cemented her decision to become a doctor by applying to medical school. She believes her engineering background will be instrumental to her work as a physician. “I’m glad that I took the engineering route, because I’ve learned a lot of different ways of thinking from doing it. I can understand the technology that lies beneath the public policy.”

Orji still plans on one day living in Nigeria but chooses not to focus her future solely on one country. “My experiences abroad have taught me that there’s so much to learn from different countries that could be applied elsewhere. No matter where I end up physically living, I want to be part of a global network of doctors that believes in the power of collaboration,” she says.

“As we’ve seen with Covid-19, we live in a globalized world where disease doesn’t stop at borders. Solutions shouldn’t either.”

Dreaming big in a small country