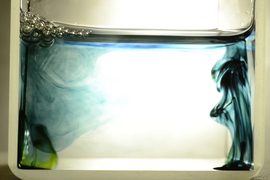 ↓ Download Image
Caption: Dyes are used to reveal the concentration levels of carbon dioxide in the water. On the left side is a gas-attracting material, and the dye shows the carbon dioxide stays concentrated next to the catalyst.
Credits: Credit: Varanasi Research Group

Caption:
Dyes are used to reveal the concentration levels of carbon dioxide in the water. On the left side is a gas-attracting material, and the dye shows the carbon dioxide stays concentrated next to the catalyst.
Credits:
Credit: Varanasi Research Group

Systems for capturing and converting carbon dioxide from power plant emissions could be important tools for curbing climate change, but most are relatively inefficient and expensive. Now, researchers at MIT have developed a method that could significantly boost the performance of systems that use catalytic surfaces to enhance the rates of carbon-sequestering electrochemical reactions.

Such catalytic systems are an attractive option for carbon capture because they can produce useful, valuable products, such as transportation fuels or chemical feedstocks. This output can help to subsidize the process, offsetting the costs of reducing greenhouse gas emissions.

The results are described today in the journal Cell Reports Physical Science in a paper by MIT postdoc Sami Khan SM ’15 PhD ’19, who is now an assistant professor at Simon Fraser University, along with MIT professors of mechanical engineering Kripa Varanasi and Yang Shao-Horn, and recent graduate Jonathan Hwang PhD ’19.

“Carbon dioxide sequestration is the challenge of our times,” Varanasi says. There are a number of approaches, including geological sequestration, ocean storage, mineralization, and chemical conversion. When it comes to making useful, saleable products out of this greenhouse gas, electrochemical conversion is particularly promising, but it still needs improvements to become economically viable. “The goal of our work was to understand what's the big bottleneck in this process, and to improve or mitigate that bottleneck,” he says.

The bottleneck turned out to involve the delivery of the carbon dioxide to the catalytic surface that promotes the desired chemical transformations, the researchers found. In these electrochemical systems, the stream of carbon dioxide-containing gases is mixed with water, either under pressure or by bubbling it through a container outfitted with electrodes of a catalyst material such as copper.  A voltage is then applied to promote chemical reactions producing carbon compounds that can be transformed into fuels or other products.

There are two challenges in such systems: The reaction can proceed so fast that it uses up the supply of carbon dioxide reaching the catalyst more quickly than it can be replenished; and if that happens, a competing reaction — the splitting of water into hydrogen and oxygen — can take over and sap much of the energy being put into the reaction.

Previous efforts to optimize these reactions by texturing the catalyst surfaces to increase the surface area for reactions had failed to deliver on their expectations, because the carbon dioxide supply to the surface couldn’t keep up with the increased reaction rate, thereby switching to hydrogen production over time.

The researchers addressed these problems through the use of a gas-attracting surface placed in close proximity to the catalyst material. This material is a specially textured “gasphilic,” superhydrophobic material that repels water but allows a smooth layer of gas called a plastron to stay close along its surface. It keeps the incoming flow of carbon dioxide right up against the catalyst so that the desired carbon dioxide conversion reactions can be maximized.

In a series of lab experiments using this setup, the rate of the carbon conversion reaction nearly doubled. It was also sustained over time, whereas in previous experiments the reaction quickly faded out. The system produced high rates of ethylene, propanol, and ethanol — a potential automotive fuel. Meanwhile, the competing hydrogen evolution was sharply curtailed. Although the new work makes it possible to fine-tune the system to produce the desired mix of product, in some applications, optimizing for hydrogen production as a fuel might be the desired result, which can also be done.

“The important metric is selectivity,” Khan says, referring to the ability to generate valuable compounds that will be produced by a given mix of materials, textures, and voltages, and to adjust the configuration according to the desired output.

By concentrating the carbon dioxide next to the catalyst surface, the new system also produced two new potentially useful carbon compounds, acetone, and acetate, that had not previously been detected in any such electrochemical systems at appreciable rates.

In this initial laboratory work, a single strip of the hydrophobic, gas-attracting material was placed next to a single copper electrode, but in future work a practical device might be made using a dense set of interleaved pairs of plates, Varanasi suggests.

Compared to previous work on electrochemical carbon reduction with nanostructure catalysts, Varanasi says, “we significantly outperform them all, because even though it’s the same catalyst, it's how we are delivering the carbon dioxide that changes the game.”

“This is a completely innovative way of feeding carbon dioxide into an electrolyzer,” says Ifan Stephens, a professor of materials engineering at Imperial College London, who was not connected to this research. “The authors translate fluid mechanics concepts used in the oil and gas industry to electrolytic fuel production. I think this kind of cross-fertilization from different fields is very exciting.”

Stephens adds, "Carbon dioxide reduction has a great potential as a way of making platform chemicals, such as ethylene, from waste electricity, water, and carbon dioxide. Ethylene is currently formed by cracking long chain hydrocarbons from fossil fuels; its production emits copious amounts of carbon dioxide​ to the atmosphere. This method could potentially lead to more efficient carbon dioxide​ reduction, which could eventually move our society away from our current reliance on fossil fuels."

The research was supported by the Italian energy firm Eni S.p.A through the MIT Energy Initiative, and a NSERC PGS-D postgraduate scholarship from Canada.