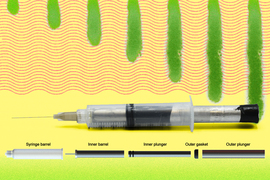 ↓ Download Image
Caption: MIT researchers have developed a simple, low-cost technology to administer powerful drug formulations that are too viscous to be injected using conventional syringes and needles.
Credits: Images courtesy of the researchers and edited by Jose-Luis Olivares, MIT. 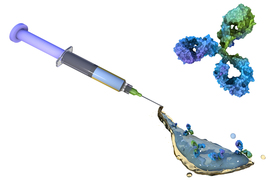 Caption:
A new device could help administer powerful drug formulations that are too viscous to be injected with conventional syringes and needles.
Credits:
Images courtesy of the researchers and edited by Jose-Luis Olivares, MIT.

MIT researchers have developed a simple, low-cost technology to administer powerful drug formulations that are too viscous to be injected using conventional medical syringes.

The technology, which is described in a paper published today in the journal Advanced Healthcare Materials, makes it possible to inject high-concentration drugs and other therapies subcutaneously. It was developed as a solution for highly effective, and extremely concentrated, biopharmaceuticals, or biologics, which typically are diluted and injected intravenously.

“Where drug delivery and biologics are going, injectability is becoming a big bottleneck, preventing formulations that could treat diseases more easily,” says Kripa Varanasi, MIT professor of mechanical engineering. “Drug makers need to focus on what they do best, and formulate drugs, not be stuck by this problem of injectability.”

Leaders at the Bill and Melinda Gates Foundation brought the injectability problem to Varanasi after reading about his previous work on dispensing liquids, which has attracted the attention of industries ranging from aviation to makers of toothpaste. A main concern of the foundation, Varanasi says, was with providing high-concentration vaccines and biologic therapies to people in developing countries who could not travel from remote areas to a medical setting.

In the current pandemic, Varanasi adds, being able to stay home and subcutaneously self-administer medication to treat diseases such as cancer or auto-immune disorders is also important in developed countries such as the United States.

“Self-administration of drugs or vaccines can help democratize access to health care,” he says. 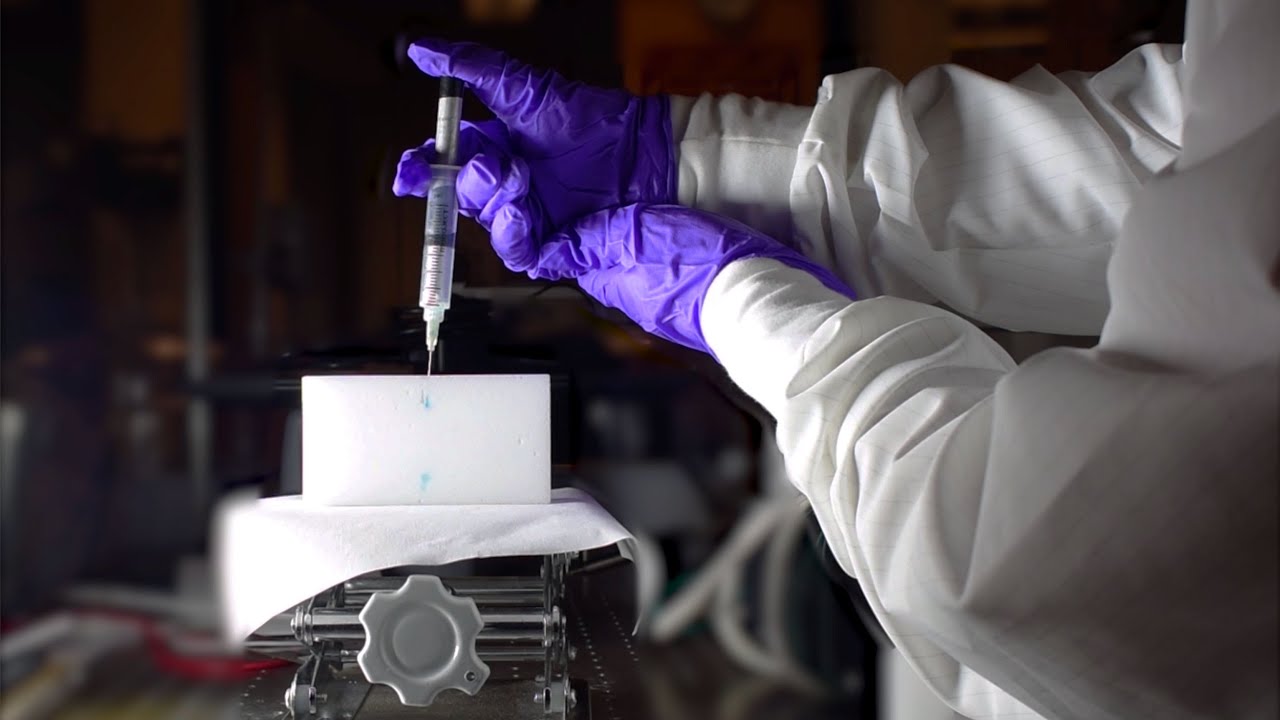 Varanasi and Vishnu Jayaprakash, a graduate student in MIT’s mechanical engineering department who is the first author on the paper, designed a system that would make subcutaneous injection of high-concentration drug formulations possible by reducing the required injection force, which exceeded what is possible with manual subcutaneous injection with a conventional syringe.

In their system, the viscous fluid to be injected is surrounded with a lubricating fluid, easing the fluid’s flow through the needle. With the lubricant, just one-seventh of the injection force was needed for the highest viscosity tested, effectively allowing subcutaneous injection of any of the more than 100 drugs otherwise considered too viscous to be administered in that way.

“We can enable injectability of these biologics,” Jayaprakash says. “Regardless of how viscous your drug is, you can inject it, and this is what made this approach very attractive to us.”

Biologic drugs include protein-based formulations and are harvested from living cells. They are used to treat a wide range of diseases and disorders, and can bind with specific tissues or immune cells as desired, provoking fewer unwanted reactions and bringing about particular immune responses that don’t occur with other drugs.

“You can tailor very specific proteins or molecules that bind to very specific receptors in the body,” says Jayaprakash. “They enable a degree of personalization, specificity, and immune response that just isn’t available with small-molecule drugs. That’s why, globally, people are pushing toward biologic drugs.”

Because of their high viscosities, administering the drugs subcutaneously has involved methods that have turned out to be impractical and expensive. Generally, the drugs are diluted and given intravenously, which requires a visit to a hospital or doctor’s office. Jet injectors, which shoot the drugs through the skin without a needle, are expensive and prone to contamination from backsplash. Injecting encapsulated drugs often results in their clogging the needle and additional complexity in drug manufacturing and release profiles. EpiPen-style syringes are also too expensive to be used widely.

To develop their technology, the MIT researchers began by defining theoretical parameters and testing them before designing their device. The device consists of a syringe with two barrels, one inside of the other, with the inner tube delivering the viscous drug fluid and the surrounding tube delivering a thin coating of lubricant to the drug as it enters the needle.

Because the lubricated fluid passes more easily through the needle, the viscous payload undergoes minimal shear stress. For this reason, Jayaprakash says, the system could also be useful for 3D bioprinting of tissues made of natural components and administering cell therapies, both cases where tissues and cells can be destroyed by shear damage.

Therapeutic gels — used in bone and joint therapies, as well as for timed-release drug delivery, among other uses — could also be more easily administered using the syringe developed by the researchers.

“The technique works as a platform for all of these other applications,” Jayaprakash says.

Pramod Bonde, Yale School of Medicine associate professor of surgery, says the technique could greatly affect the field of medicine.

“This innovative technology has the potential to have a fundamental and wide-ranging impact on how drugs are delivered in the body,” Bonde says.

Whether the technology will make a difference as researchers hunt for Covid-19 vaccine possibilities and treatments is unclear. The researchers say, however that it widens the options as different drug formulations are considered.

“Once you have the story about the technology out there, the industry might say they could consider things that had previously been impossible,” Varanasi says.

With his previous work having spurred the creation of four companies, Varanasi says he and his team are hopeful this technology will also be commercialized.

“There should be no reason why this approach, given its simplicity, can’t help solve what we’ve heard from industry is an emerging problem,” he says. “The foundational work is done. Now it’s just applying it to different formulations.”