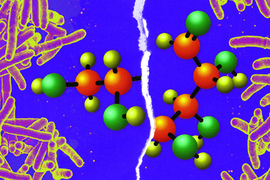 ↓ Download Image
Caption: MIT chemists have discovered that changing the length of the carbohydrate galactan can dramatically affect its function. In a study of mycobacteria, the type of bacteria that cause tuberculosis and other diseases, they found that shortening galactan impairs some cell functions and makes the cells much more susceptible to certain antibiotics. This artistic impression shows the carbohydrate galactan sliced in half in the foreground, while the background shows an image of tuberculosis bacteria.
Credits: Image: Jose-Luis Olivares, MIT. Tuberculosis image courtesy of NIAID

Caption:
MIT chemists have discovered that changing the length of the carbohydrate galactan can dramatically affect its function. In a study of mycobacteria, the type of bacteria that cause tuberculosis and other diseases, they found that shortening galactan impairs some cell functions and makes the cells much more susceptible to certain antibiotics. This artistic impression shows the carbohydrate galactan sliced in half in the foreground, while the background shows an image of tuberculosis bacteria.
Credits:
Image: Jose-Luis Olivares, MIT. Tuberculosis image courtesy of NIAID

Every living cell is coated with a distinctive array of carbohydrates, which serves as a unique cellular “ID” and helps to manage the cell’s interactions with other cells.

MIT chemists have now discovered that changing the length of these carbohydrates can dramatically affect their function. In a study of mycobacteria, the type of bacteria that cause tuberculosis and other diseases, they found that shortening the length of a carbohydrate called galactan impairs some cell functions and makes the cells much more susceptible to certain antibiotics.

The findings suggest that drugs that interfere with galactan synthesis could be used along with existing antibiotics to create more effective treatments, says Laura Kiessling, the Novartis Professor of Chemistry at MIT and the senior author of the study.

“There are a lot of TB strains that are resistant to the current set of antibiotics,” Kiessling says. “TB kills over a million people every year and is the number one infectious disease killer.”

Former MIT graduate student Alexander Justen is the lead author of the paper, which appears today in Science Advances.

The long and short of it

Galactan, a polysaccharide, is a component of the cell wall of mycobacteria, but little is known about its function. Until now, its only known role was to form links between molecules called peptidoglycans, which make up most of the bacterial cell wall, and other sugars and lipids. However, the version of galactan found in mycobacteria is much longer than it needs to be to perform this linker function.

“What was so strange is that the galactan is about 30 sugar molecules long, but the branch points for the other sugars that it links to are at eight, 10, and 12. So, why is the cell expending so much energy to make galactan longer than 12 units?” Kiessling says.

That question led Kiessling and her research group to investigate what might happen if galactan were shorter. A team led by Justen genetically engineered a type of mycobacteria called Mycobacterium smegmatis (which is related to Mycobacterium tuberculosis but is not harmful to humans) so that their galactan chains would contain only 12 sugar molecules.

As a result of this shortening, cells lost their usual shape and developed “blebs,” or bulges from their cell membranes. Shortening galactan also shrank the size of a compartment called the periplasm, a space that is found between a bacterial cell’s inner and outer cell membranes. This compartment is involved in absorbing nutrients from the cell’s environment.

“This suggests that drugs that would lead to these truncated chains could be valuable in combination with hydrophobic antibiotics,” Kiessling says. “I think it validates this part of the cell as a good target.”

Her lab is currently working on developing drugs that could block galactan synthesis, which is not targeted by any existing TB drugs. Patients with TB are usually given drug combinations that have to be taken for six months, and some strains have developed resistance to the existing drugs.

Kiessling’s lab is also studying the question of why it is useful for bacteria to alter the length of their carbohydrate molecules. One hypothesis is that it helps them to shield themselves from the immune system, she says. Some studies have shown that a dense coating of longer carbohydrate chains could help to achieve a stealth effect by preventing host immune cells from interacting with proteins on the bacterial cell surface.

If that hypothesis is confirmed, then drugs that interfere with the length of galactan or other carbohydrates might also help the immune system fight off bacterial infection, Kiessling says. This could be useful for treating not only tuberculosis but also other diseases caused by mycobacteria, such as chronic obstructive pulmonary disease (COPD) and leprosy. Other strains of mycobacteria (known as “flesh-eating bacteria”) cause a potentially deadly infection called necrotizing fasciitis. All of these mycobacteria have galactan in their cell walls, and there are no good vaccines against any of them.

Although the research may end up helping scientists to develop better drugs, Kiessling first became interested in this topic as a basic science question.

“The reason I like this paper is because while it does have implications for treating tuberculosis, it also shows a fundamentally new role for carbohydrates, which I love. People are finding that they can have unexpected roles, and this is another unexpected result,” she says.