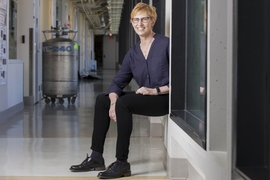 Every living cell is coated with a layer of carbohydrates. The composition of these molecules essentially serves as an identification card for a cell, says Laura Kiessling, the Novartis Professor of Chemistry at MIT.

While researchers have learned much about how these coats vary from cell to cell, Kiessling is now investigating “how proteins check those IDs, and what cells do when they are let into the party,” as she puts it. Her lab is working on identifying some of the key carbohydrates expressed by human and bacterial cells, and exploring how they interact with proteins and other molecules. Such knowledge could be exploited to develop new treatments and diagnostics for a variety of diseases.

Kiessling, who joined MIT’s faculty in 2017 after 26 years at the University of Wisconsin at Madison, is developing vaccines that interact with cell surface carbohydrates, and she is also exploring ways to disrupt microbes’ ability to assemble the carbohydrates they need to build their cell walls.

“Bacteria have cell walls made of building blocks that we don’t use and that can be unique to different species,” she says. “That opens opportunities for new kinds of antibiotics that are narrow-spectrum. They don’t target all bacteria, but they target pathways that pathogenic bacteria need to build critical cell surface carbohydrates.”

Growing up in rural Wisconsin, Kiessling spent a lot of time doing outdoor activities, such as camping and observing the wildlife in the pond in her parents’ backyard. With one of her brothers, she performed “shocking” experiments with a kids’ electronics kit and tried to convert the family lawnmower into a go-cart. When it was time to choose a college, she decided on the University of Wisconsin at Madison. At the time, top students in Wisconsin high schools could be admitted automatically to the state university, so she didn’t apply anywhere else.

Her closest friend at the university had a sister who was a student at MIT, so for spring break their first year, Kiessling and her friend decided to head to Cambridge for a visit. After a 20-hour train ride from Chicago, Kiessling spent the next several days attending classes and hanging out with her friend’s sister in her dorm, McCormick Hall, MIT’s first women’s dorm and today the only women-only residence hall.

“I met all these amazing women who were doing science, and I thought, oh my gosh, I should transfer here,” Kiessling recalls. She met someone who worked in the admissions office and convinced them to give her an interview, then formally applied as soon as she got back to Wisconsin. In August, she found out that she had been accepted, and transferred at the beginning of her sophomore year.

At MIT, she majored in chemistry, where her lab partner and close friend was Cady Coleman ’83, who later became an astronaut. She also rowed on MIT’s crew team, along with Elizabeth Bradley, a future Olympian. After graduating, Kiessling decided to go to Yale University for graduate school, where she focused on organic chemistry.

At Yale, she worked in the lab of Stuart Schreiber, who is now a member of the Broad Institute of MIT and Harvard. At the time, they were working on synthesizing a naturally occurring antitumor agent that cleaves DNA. “That got me really interested in using chemistry to study biological processes,” Kiessling says.

After finishing her PhD, Kiessling did a postdoc at Caltech, working with Peter Dervan, a professor of chemistry, on a strategy for modifying DNA. Their idea was to use chemical compounds to recognize DNA sequences so that they could be selectively cut out, similar to the way that the CRISPR genome-editing system works now.

When Kiessling joined the faculty at the University of Wisconsin in 1991, she was inspired to study carbohydrates by an argument she had had with some of her labmates at Yale over how carbohydrates interact with DNA. She thought that the carbohydrates must be involved in recognizing DNA, while others believed their role was more limited.

“The basis for that argument made me start thinking about carbohydrates, and I realized we don’t know very much about their biological roles,” she says. “So when I went to start my own lab, I thought this would be an exciting field to get involved in.”

Carbohydrates on cell surfaces often interact with proteins, including a class of proteins called lectins. Kiessling has previously shown that many of these lectin-carbohydrate interactions are multivalent, meaning they involve multiple receptors binding to multiple binding partners, and she has designed polymers, similar to carbohydrates, that can mimic these interactions.

She also recently discovered that some human lectins, found in the gut and lung, only bind to carbohydrates found on the surface of bacteria. This interaction appears to help human cells grab onto and retain bacterial cells that may be potentially useful.

“A lot of these lectins are at mucosal barriers, and they’ve evolved to presumably help us keep microbes in the right spot,” Kiessling says.

She is also studying how cells synthesize carbohydrates, in hopes of developing drugs that could specifically block the production of carbohydrates expressed by pathogens such as the mycobacteria that cause tuberculosis.

In another project, she is developing cancer vaccines that could target carbohydrate-binding proteins located on the surfaces of immune cells. She is also working on a vaccine that targets a protein produced by chickens when they contract bacterial infections. This protein limits chicken growth, which is partly why chickens raised for food are treated with antibiotics. Blocking that protein, Kiessling hopes, could help to eliminate the need for antibiotic treatment.

Many of these projects involve collaborations with other MIT faculty members, including a large number of female professors. The possibility of such collaborations is one of the reasons that Kiessling decided to join the faculty here.