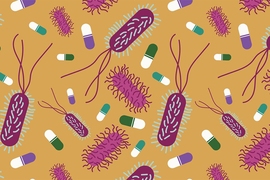 ↓ Download Image
Caption: MIT researchers have discovered a way to make bacteria more vulnerable to a class of antibiotics known as quinolones, which include ciprofloxacin and are often used to treat infections such as Escherichia coli and Staphylococcus aureus.

Caption:
MIT researchers have discovered a way to make bacteria more vulnerable to a class of antibiotics known as quinolones, which include ciprofloxacin and are often used to treat infections such as Escherichia coli and Staphylococcus aureus.

MIT researchers have discovered a way to make bacteria more vulnerable to a class of antibiotics known as quinolones, which include ciprofloxacin and are often used to treat infections such as Escherichia coli and Staphylococcus aureus.

The new strategy overcomes a key limitation of these drugs, which is that they often fail against infections that feature a very high density of bacteria. These include many chronic, difficult-to-treat infections, such as Pseudomonas aeruginosa, often found in the lungs of cystic fibrosis patients, and methicillin-resistant Staphylococcus aureus (MRSA).

Arnaud Gutierrez, a former MIT postdoc, and Saloni Jain, a recent Boston University PhD recipient, are the lead authors of the study, which appears in the Dec. 7 online edition of Molecular Cell.

Bacteria that have become tolerant to a drug enter a physiological state that allows them to evade the drug’s action. (This is different from bacterial resistance, which occurs when microbes acquire genetic mutations that protect them from antibiotics.) “Tolerance is not well-understood, and we don’t have the means to circumvent it or overcome it,” Collins says.

In a study published in 2011, Collins and his colleagues found that they could increase the ability of antibiotics known as aminoglycosides to kill drug-tolerant bacteria by delivering a type of sugar along with the drug. The sugar helps to boost the metabolism of the bacteria, making it more likely that the microbes will undergo cell death in response to the DNA damage caused by the antibiotic.

However, aminoglycosides can have serious side effects, so they are not widely used. In their new study, Collins and his colleagues decided to explore whether they could use a similar approach to boost the effectiveness of quinolones, a class of antibiotics used more often than aminoglycosides. Quinolones work by interfering with bacterial enzymes called topoisomerases, which help with DNA replication and repair.

With quinolones, the researchers found that it wasn’t enough to add just sugar; they also had to add a type of molecule known as a terminal electron acceptor. Electron acceptors play an essential role in cellular respiration, the process that bacteria use to extract energy from sugar. In cells, the electron acceptor is usually oxygen, but other molecules, including fumarate, an acidic organic compound that is used as a food additive, can also be used.

In tests in high-density bacterial colonies grown in a lab dish, the researchers found that delivering quinolones along with glucose and fumarate could eliminate several types of bacteria, including Pseudomonas aeruginosa, Staphylococcus aureus, and Mycobacterium smegmatis, a close relative of the bacterium that causes tuberculosis.

The findings suggest that high-density bacterial infections rapidly consume nutrients and oxygen from their environment, which then provokes them to enter a starvation state that helps them to survive. In this state, they greatly reduce their metabolic activity, which allows them to avoid the cell death pathway that is normally triggered when DNA is damaged by antibiotics.

“This finding highlights that the metabolic state of the bug significantly influences how the antibiotic will impact the bug. And, for the antibiotic to be effective as a killing agent, it requires downstream cellular respiration as part of the process,” Collins says.

The researchers now hope to test this approach in bacterial infections in animals, and they are also exploring how to best deliver the drug combination for different types of infections. A topical treatment could work well for Staphylococcus aureus infections, while an inhaled version could be used to treat Pseudomonas aeruginosa infections of the lungs, Collins says.

Collins also hopes to test this approach with other types of antibiotics, including the class that includes penicillin and ampicillin.

“This study encourages work to find new ways to stimulate bacterial respiration and thereby enhance the production of reactive oxygen (or even non-oxygen) species during antibiotic treatment, for better eradication of bacterial pathogens, particularly those having low metabolic activity that may render them tolerant to antimicrobials,” says Karl Drlica, a professor at the Public Health Research Institute at Rutgers New Jersey Medical School, who was not involved in the research.

The research was funded by the Defense Threat Reduction Agency, the Broad Institute of MIT and Harvard, and a gift from Anita and Josh Bekenstein.