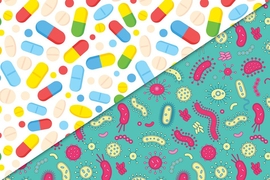 Caption:
A new method allows scientists to learn more about how existing antibiotics work and potentially help them to develop new drugs.

MIT and Harvard University researchers have engineered E. coli cells that can be used to study how bacteria at an infection site respond to antibiotic treatment, allowing scientists to learn more about how existing antibiotics work and potentially help them to develop new drugs.

In the new study, which appears in the Aug. 31 issue of Cell Host and Microbe, the researchers found evidence that some existing hypotheses about how bacteria respond to antibiotics are not correct.

Much of the research in Collins’ lab focuses on trying to understand how antibiotics work, in hopes of designing more effective drugs. For the new study, Collins wanted to apply synthetic biology — the construction of novel genetic circuits in living cells — to design bacteria that could be used to study antibiotics and infection.

Most studies of how antibiotics work are done with bacterial cells grown in a lab dish. However, Collins and Certain suspected that these drugs’ effects could be different in living animals because that environment, including available nutrients and other conditions, is very different from a lab dish.

To allow them to study antibiotics under more realistic conditions, the researchers engineered a strain of E. coli bacteria that expresses a genetic “toggle switch” that flips only under certain conditions. Such switches can be incorporated into bacteria to allow them to record events such as exposure to a chemical.

In this case, the researchers designed the bacteria to reveal whether they were dividing or not, allowing them to explore how antibiotics affect cells in either state. Previous studies done in bacteria grown in a lab dish have found that most antibiotics work better on cells that are dividing, while non-replicating cells are much harder to kill.

The researchers delivered the bacteria to mice along with a small orthopedic implant, to mimic the infections that often occur at the sites of medical implants. The mice were then treated with the antibiotic levofloxacin. Before and after treatment, the cells were removed and treated with ATC, a molecule that turns on the toggle switch, but only in cells that are replicating.

Scientists have hypothesized from previous studies that chronic infections usually consist largely of non-dividing bacteria. However, in this study, the researchers found that before antibiotic treatment, about half of the bacteria were still actively dividing.

Another surprising finding contradicted scientists’ hypothesis that chronic persistent infections consisting of non-dividing bacteria are highly tolerant to antibiotics: They found the infections were still susceptible to antibiotics, when given at large enough doses.

Collins says this study demonstrates that there is much more for scientists to learn about how antibiotics work, and suggests that engineered organisms could be useful for further investigating their effects.

“This is going to challenge people to rethink what antibiotics are doing at an infection site,” Collins says. “I think that eventually these synthetic biology tools could also be quite useful in antibiotic development, to see whether the antibiotics are getting to the pathogens of interest, how effective they are, and what they are actually doing at the site.”

He adds that the genetic toggle switch could be easily transferred to other types of bacteria, and could also be designed to test for other features such as how bacteria interact with immune cells at an infection site. This approach could also be used to study biofilms — sticky sheets of bacterial cells that can be very difficult to remove — and other pathogens such as fungi.

The research was funded by the Paul G. Allen Frontiers Group, the Defense Threat Reduction Agency, and the Wyss Institute.