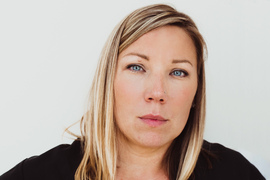 ↓ Download Image
Caption: MIT graduate student Jessica Varner has explored how the chemical industry wooed the building and construction industry with new synthetic materials at the turn of the 20th century. The result, she writes in her dissertation, was “one of the most successful, and toxic, material transformations in modern history.” 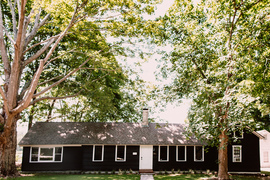 ↓ Download Image
Caption: Next year Varner will launch the Black House Project, an interdisciplinary artist-in-residence space on the Connecticut property. Artists who participate will be asked to engage with a seasonal theme relating to the intersection of history, environment, and community.
Credits: Photo: Sarah Cal

Caption:
MIT graduate student Jessica Varner has explored how the chemical industry wooed the building and construction industry with new synthetic materials at the turn of the 20th century. The result, she writes in her dissertation, was “one of the most successful, and toxic, material transformations in modern history.”
Credits:
Photo: Sarah Cal

Caption:
Next year Varner will launch the Black House Project, an interdisciplinary artist-in-residence space on the Connecticut property. Artists who participate will be asked to engage with a seasonal theme relating to the intersection of history, environment, and community.
Credits:
Photo: Sarah Cal

Just months before starting her PhD, Jessica Varner and her partner bought a small house built in 1798. Located on tidal wetlands along Connecticut’s Patchogue River, the former residence of an ironworker had endured over two centuries of history and neglect.

As Varner began to slowly restore the house — discovering its nail-less construction and thin horsehair plaster walls, learning plumbing skills, and burning oyster shells to make lime wash — she discovered a deep connection between her work inside and outside academia.

For her dissertation in MIT’s History, Theory and Criticism of Architecture and Art program, Varner had been investigating how the chemical industry wooed the building and construction industry with the promise of “invisible,” “new,” and “durable” synthetic materials at the turn of the 20th century. In the process, these companies helped transform modern architecture while also disregarding or actively obscuring the health and environmental risks posed by these materials. While researching the history of these dyes, additives, and foams, Varner was also considering the presence of similar synthetics in her own new home.

Coming into closer contact with these types of materials as a builder herself gave Varner a new perspective on the widespread implications of her research. “I think with my hands … and both projects began to inform each other,” she says. “Making and writing at the same time, I’m amazed how much this house is a part of the work.”

The reverse proved true as well. Next year Varner will launch the Black House Project, an interdisciplinary artist-in-residence space on the Connecticut property. Artists who participate will be asked to engage with a seasonal theme relating to the intersection of history, environment, and community. The inaugural theme will be, “building from the ashes,” with a focus on burning and invasive species.

The chemical industry has a longer history for Varner than she even initially understood: She comes from a long line of farming families in Nebraska, a state with a complex relationship with the agricultural-chemical industry.

“That was just our way of life and we never questioned it,” she says of the way farm life became entwined with the chemical necessities and economic hardships of American industrial agriculture. She recalls spraying herbicide, without a mask, on thistles on the farm after her family received government letters threatening daily fines if her family did not remove the plant. She also remembers how their farm, and much of the region, depended on seeds and other products from DeKalb.

“Coming from a place that depends so much on the economy of an industry, there are nuances and deeper layers to the story” of modern agriculture, she says, noting that the subsistence farming and often industrial farming go hand in hand.

At MIT, Varner has continued to probe beneath the surface of how chemical products are promoted and adopted. For her thesis, with the help of a Fulbright scholarship, she began digging through the chemical companies’ corporate archives. Her research has revealed how these companies generated research strategies, advertising, and publicity to transform the materials of the “modern interior and exterior.”

Underneath a veneer of technological innovation and promises of novelty, Varner argues, these companies carefully masked their supply chains, adjusted building codes, and created marketing teams knowns as “truth squads,” which monitored and reshaped conversations around these products and growing concerns about their environmental harms. The result, she writes in her dissertation, was “one of the most successful, and toxic, material transformations in modern history.”

Varner has a long-running interest in environmental activism, from the conservation and restoration efforts in her home state, to vegetarianism, to studying glaciers in Alaska, to her current conception of the Black House Project. “At every point I feel like my life has had environmental activism in it,” she says.

Environmental concerns have always been an integral part of her studies as well. After her undergraduate education at the University of Nebraska, Varner went on to study architecture and environmental design at Yale University, where she studied the debates between climate scientists and architects in the 1970s. Then she headed to Los Angeles as a practicing architect and professor.

Working with as a designer with Michael Maltzan Architecture while teaching seminars and studios on at the University of Southern California and Woodbury University, she realized her students had bigger, historical questions, such as about the origin of sustainability catchphrases like “passive cooling,” “circular economy,” and “net-zero.” “There were deeper questions behind what environmentalism was, how you can enact it, how you know what the rules of sustainability are, and I realized I didn’t have answers,” Varner says. “It was taken for granted.”

Those questions brought her to MIT, where she says the cross-cutting nature of her work benefitted from the Institute’s intersection with chemistry and engineering and history of technology. “The questions I was asking were interdisciplinary questions, so it was helpful to have those people around to bounce ideas off of,” she says.

This fall, Varner will return to MIT as a lecturer while also working with the Environmental Data and Governance Initiative. At EDGI, she is the assistant curator for the EPA Interviewing Working Group, an ongoing oral history project chronicling the inner workings of the EPA and the way the organization has been affected by the current administration.

“I’m excited to get back in the classroom,” she says, as well as finding a new way to take her academic interests into a more activist and policy-oriented sphere at EDGI. “I definitely think that’s what MIT brought to me in my education, other ways to carry your knowledge and your expertise to engage at different levels. It’s what I want to keep, going forward as a graduate.”