“My job is to be critical and deep as an art historian, and not as a politician,” says PhD student Nisa Ari.
Fatima Husain | MIT News correspondent
Publication Date:
Press Inquiries 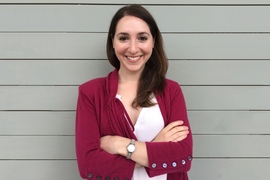 Caption:
Nisa Ari is a doctoral candidate in MIT's History, Theory, and Criticism of Architecture and Art program.
Credits:
Courtesy of Nisa Ari

Before she was a PhD student searching through art history archives around the world, a young Nisa Ari attended museums with her family and tried to discern the histories behind the artwork and artifacts she saw. “It always had the appeal of detective work,” Ari says. Sometimes, when she’d walk into a new gallery, she’d challenge herself to identify artists from paintings at a distance: “That’s a Cézanne, that’s a Picasso, that’s a Léger.”

When visiting her father’s family in Istanbul, the Colorado native would sit and sketch on the porch with her grandfather, an artist. Ari’s interests included the performing arts as well. “I was a singer,” Ari says. “That was my life, but I was really academically minded, too. So when it came time to go to college, I applied to music conservatories as well as [universities].” Ari decided to attend Stanford University — with the intention to move to New York City and live as a performer after completing her undergraduate degree.

She enrolled in an art history class at Stanford during her first year — a decision which led her to major in art history. Following graduation, Ari spent five years auditioning for roles and performing in musical theater productions around the country. But she had a longing to return to the art world, and worked as an assistant director at the Elizabeth Foundation for the Arts in New York City. “That experience was good — it made me realize that I was not willing to totally commit myself to a life of performing,” Ari says. “There was a moment when I thought, it’s time to do a PhD.”

Now, Ari is a doctoral candidate in the History, Theory, and Criticism of Architecture and Art program at MIT, and studies the development of arts and crafts in Palestine from 1876 to 1948. Her transition back into academia was “relatively painless,” she says — and she still takes cues from her training as a performer to work though her dissertation. “I like to say I tap dance through grad school — I feel like I use the skills [gained in New York] all the time in what I do now.”

Ari was drawn to the History, Theory, and Criticism of Architecture and Art program because of its strength in modern Middle Eastern art history. Her early research was rooted in the 1990s — a period when prominent nonprofits that supported the arts arrived in the Middle East. With guidance from co-advisors Nasser Rabbat, the director of the Aga Khan Program for Islamic Architecture at MIT, and Caroline Jones, a professor of art history, Ari zeroed in on the idea of studying the development of Palestinian art during the 19th and 20th centuries. But it was a challenge: Three other students interested in Palestine had been stymied by a lack of access to artwork, the lack of a record of Palestinian artwork in archives, and the difficulties of working across the politics of the region. But Ari, who studied Arabic at Harvard University while enrolled at MIT and took summer research trips to Israel, the Palestinian territories, and Jordan through MISTI, was determined to follow through.

Ari’s fieldwork is “more comparable to that of an anthropologist or sociologist” and involves travel to Israel, the Palestinian territories, Lebanon, England, and Jordan. She looks through a plethora of documents that record the development of art by artists and social commentators alike: files, letters, photographs, postcards. Not all records are public — Ari often works to track down private collections as well. “There are several private Palestinian [art] collectors who live in Beirut, Lebanon. Those collections are more personal,” Ari says. While most of the artists Ari studies are now deceased, she sometimes comes across their descendants and listens to their stories.

“I’m very interested in social relationships and social networks in terms of how they affect artistic production,” Ari says. “For me, the proof is always in the pudding. I always have to be able to still see it in the artwork to understand those relationships.”

Between the end of the Ottoman empire in the early 20th century and the close of the British Mandate in 1948, Palestine underwent widespread political and social changes. Ari focuses on notable shifts in the region’s artwork and how art was used, from religious purposes to commercial and political ones. “I’m trying to understand how changes in art happened in Palestine as a result of this major political and social upheaval,” she says.

Ari is also well aware of the political and social tensions stemming from the Arab-Israeli conflict in the countries she visits to perform her research. “It’s tough because it’s such an active situation, and people’s lives really are at stake,” Ari says. “There’s a kind of emotional labor involved in that there’s a lot of code switching that I have to do when I’m talking to an Israeli at the Central Zionist Archives in Jerusalem versus when I’m meeting with a Palestinian art collector in Bethlehem. While my project stays the same, my approach has to change.”

In some cases, Ari has to meet with curators and archivists multiple times before gaining access to archives: “Understandably, for some there’s a real fear about how you’re going to use the material.”

“I’ve found that honesty is the best policy and just to present myself as best I can, because the whole purpose of the project is to preserve nuance where so much of it has been lost because of contemporary politics,” Ari says. “I think it really helps that I did not start from a place of politics for this particular project.”

Ari cites her own heritage — her father’s family is orthodox Muslim and her mother’s is orthodox Jewish. “Having some background in both of these religious cultures has helped me to recognize the nuances of the situation. … My job is to be critical and deep as an art historian and not as a politician.”

“I remind myself that I’m making a choice to do this every day when I’m crossing the border [between Israel and the Palestinian territories] — other people who are there with me don’t have that choice,” Ari says.

Ari has also been co-editor of Thresholds, the MIT architecture department’s peer-reviewed journal; a dissertation fellow with the Mellon Foundation/American Council of Learned Societies; a research fellow with the Palestinian American Research Center; a dissertation fellow at Darat al Funun in Amman, Jordan; and the recipient of an international research grant from the Terra Foundation for American Art. She also received the Rhonda A. Saad Prize for Best Paper in Modern and Contemporary Art for a section from her dissertation, which was recently published in Arab Studies Journal.

After MIT, Ari hopes to apply for postdoctoral fellowships and teaching positions and turn her dissertation into a book, with the long-term intention of teaching. “I intended to teach from the start,” she says.