MIT professor’s book develops a new narrative about photography and the ways we use it, from the place where it all began.
Peter Dizikes | MIT News Office
Publication Date:
Press Inquiries 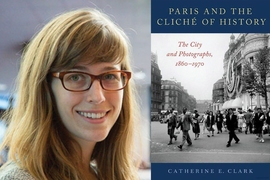 ↓ Download Image
Caption: Catherine Clark and the cover of "Paris and the Cliché of History"

Caption:
Catherine Clark and the cover of "Paris and the Cliché of History"

Imagine a photo of Paris you’ve seen before, whether it’s the Eiffel Tower or an urchin carrying a baguette. Have you ever considered the story behind that picture — why it was taken, and why it’s in circulation today?

If you haven’t, MIT scholar Catherine Clark certainly has. Clark, an associate professor of French studies in MIT’s Global Studies and Languages section, has looked at tens of thousands of photos of Paris over the years. Now, in a new book, Clark takes a deep look at history told through photographs of Paris itself — as a way of understanding how photography’s influence on our historical imaginations has changed since its 19th-century origins.

After all, Paris is where Louis Daguerre unveiled his “daguerreotype” method of photo-making in 1839, and people have been training their cameras on the city ever since. At first, many Parisians were simply documenting their city. In the 20th century, however, Parisian photography became more self-conscious. Many World War II photos of Paris, for instance, are staged images meant to burnish the idea of French resistance, accurately or not.

“Looking at old photographs has its own history,” Clark says. “The book traces the ways in which that evolves — how people’s ideas about what the photograph will do, and do for the study of history, changes.”

Clark’s book, “Paris and the Cliché of History,” is being published this week by Oxford University Press. The title plays on the world “cliché,” which in French also refers to the glass plates that used to serve as photographic negatives in the early days of the medium, as well as metal printing plates that combined images and type.

At first: Copying the world

In Clark’s account, Paris has seen at least five distinct historical phases during which the purpose of photographing the city evolved.

The first occurred around 1860, as Paris went through a radical physical transformation led by Georges-Eugene Haussmann, who created the scheme of grand boulevards and clear urban geometry that now defines much of the city. While demolishing much of the old Paris, however, Haussmann sought to chronicle it through the city’s official photographer, Charles Marville. Over time, the city’s Musée Carnavalet also served as a focal point for this kind of effort, acquiring a huge collection of Paris images.

“Part of rebuilding Paris to be an imperial capital and seat of power was preserving its history,” Clark explains.

At this stage, she notes, photography was often straightforwardly documentary, as a medium, replacing paintings and prints as our essential visual representation of the world.

“There were debates in the 19th century about what photos were going to be used for — for science, for art, but also, for people running historical institutions,” Clark notes. “The first thing they’re doing is just cataloging objects. Photographs were imagined as a one-to-one copy of something in the world.”

That changed. A second and distinct phase of Paris’ photographic history, Clark thinks, set in by the 1920s. Photos now became objects of nostalgia for the French, who were dealing with the trauma of World War I, when France suffered millions of casualties and the global order spun out of control.

“It’s this major moment of social upheaval, not just because a lot of people died, but because the world seemed to crumble,” Clark said. “People felt there was a rupture, and they could never go back to what existed before, except now, they could see what the past looked like, because they had photographs. And so a new paradigm arises from that, where photographs are fragments of lost time. And that’s a really powerful way to think about photographs.”

War also produced a third distinct phase of photography in Paris, in Clark’s account — World War II, often depicted through images of seemingly heroic Parisian resistance fighters in moments of dramatic action. But as Clark notes, many such photos were plainly staged. Consider one photo she analyzes in the book, in which three French citizens look through a window, with one aiming a rifle outside. It is almost certainly not a glimpse of real fighting — the men in the picture are too exposed and neatly arranged.

Or take some photos showing ordinary Parisians at barricades in the streets — which would have been a futile tactic in the face of German tanks. But a barricade is a historical trope signifying resistance. To some degree, then, the people in these Parisian photos were “demonstrating political allegiances and performing a certain type of wartime action,” Clark says. “Militarily, the liberation of Paris doesn’t matter that much, but in terms of what it symbolizes, it really matters.”

Moreover, in such resistance photos, we see a familiar process at work, in which people are self-consciously thinking about how the images will be viewed in the future.

“The way in which [the war] was going to be remembered was already being performed on the ground,” Clark says. “It’s not like things happen, and then we create historical narratives about them. We’re already creating historical narratives as we act. These photos published in newspapers, magazines, and books are often in turn the way people learn about such events.”

Clark believes there are at least two other notable moments when Parisian photography evolved in significant ways. One came in the run-up to city-wide celebrations, in 1951, of Paris’ 2,000th anniversary. Around this time, she observes, Paris photos became more oriented around ordinary people — working-class men, women, and children in everyday life.

“The problem in Paris in 1950 and 1951 is that the city doesn’t look grand,” Clark says. “It’s kind of falling apart in a lot of places. So what do you do when the city doesn’t look great, but you know that it is great? You create narratives about other types of greatness. And I think that’s one reason for this nostalgia for the Parisian working classes in 1950.”

A rather different burst of Parisian photography occurred around 1970s, Clark notes, in the form of a city-sanctioned amateur photography contest that produced 100,000 images of the city. (Clark estimates she has looked at about 15,000 of them.) Here too, Paris officials were trying to capture the city at a moment of physical change, but letting the people do it.

“It’s a great echo for this 1860 moment,” Clark says. “Paris is being modernized again, highways, cars along the banks of the Seine, new high-rises, this feeling of needing to capture what’s being destroyed. [And] in the 1970s, there’s a real sense that the best people to photograph the city would be people who love the city and believe in it. There’s just so much diversity, so many ways of seeing the city in there.”

In the bigger historical picture, Clark thinks, Paris is, on the one hand, ideally suited to an analysis of its photographic self-image — yet hardly the only place where this type of study can be performed.

“The French think of photography as their own invention, and there is a national heritage element to it,” Clark says. “There’s a powerful archival impulse in France … and the historical institutions in Paris are some of the earliest.”

On the other hand, Clark notes, her study is about how photography shaped the historical imagination, and the general concept that Parisian photographic history changed at moments of dramatic historical upheaval may well apply to other cities, too.

“I would love to see someone do a similar study in other places,” Clark says. “After all, in 1839, photography was given to the world by the French government, but the rest of the world made it their own.”