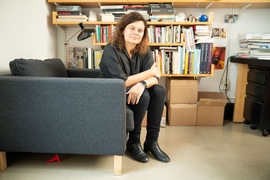 ↓ Download Image
Caption: “The classroom is where I practice and cultivate a kind of utopia with my students, in the best possible sense,” says Associate Professor Ana Miljacki.
Credits: Image: Bryce Vickmark

Caption:
“The classroom is where I practice and cultivate a kind of utopia with my students, in the best possible sense,” says Associate Professor Ana Miljacki.
Credits:
Image: Bryce Vickmark

Inside Ana Miljacki’s office in MIT’s Department of Architecture, a sign hangs on the wall bearing a wry message:

UTOPIA IS HERE
JUST FOR TODAY

By itself, that sign could be a lot of things: an earnest plea to enjoy the moment, an ironic commentary on the futility of seeking perfection, or a wistful nod to the impermanence of everything.

In Miljacki’s case, it is all of those, and a reference to architects she has studied and written about. Miljacki is an architectural historian, curator, and designer who has written books on postwar design, co-curated the U.S. pavillion at Venice Biennale, and heads the Master of Architecture program at MIT.

Miljacki’s first book was about the hopes and compromises of architects in postwar Czechoslovakia, covering the first three decades of their attempts to develop roles within the larger project of “constructing socialism.” Some of them, such as a group called SIAL from Liberec, made what Miljacki calls “a genuine effort to practice utopia” under the circumstances.

In terms of architecture, Miljacki has written, this meant that “utopia was no longer synonymous with the production of fantastical images of a perfect world sometime and somewhere else.” For the designers of SIAL themselves, this meant an “attempt to work out an effective role for architecture and architects within the confines” of a repressive political system.

Thus the SIAL architects had dreams but were realists, and the tension between these two things defined their careers.

“I have empathy for architects who operated in that context,” Miljacki says. “I don’t try to simplify the story, but I’m not unsympathetic to what they were trying to do, including survive.”

Today, in a very different time and place, Miljacki still ponders these ideas when evaluating her own career.

“Utopia is never something to strive for as a complete and frozen condition,” Miljacki says. But she is an idealist about the discipline of architecture, and, above all, about teaching it to MIT students. Indeed, Miljacki says, the best way to think about teaching is as a form of utopia.

“The classroom is where I practice and cultivate a kind of utopia with my students, in the best possible sense,” she says.

By Miljacki’s account, it is unsurprising that she became a architect. She grew up in Belgrade as the child of two architects who designed “large swaths of housing” for the former Yugoslavia.

“For me, architecture seemed an obvious choice,” Miljacki recounts. She went to an architectural high school in Belgrade and was accepted to architectural college in Belgrade, just as the Yugoslavian war was breaking out in the early 1990s. Helped by a family friend, Miljacki spent a year attending high school and applying to colleges in the U.S.

“I’d never been to the U.S., but I was always dreaming of big things,” Miljacki says. And she got a full scholarship to Bennington College, the liberal arts college in Vermont.

“A liberal arts school as a model didn’t exist in my world,” Miljacki says, “but I suddenly had room to think about philosophy and literature and architecture and set design in the same context.” Moreover, Bennington’s educational philosophy — including no letter grades for students — helped her become a better, more inquisitive student.

“Bennington had no grades, and I had been a very good ‘A’ student, so I knew what it took to get good grades,” Miljacki recounts, calling the new model “an important shock to the system.” Instead, she notes, “[w]ith grades irrelevant, we were all left to our own — and our teachers’ — more nuanced judgment about what was relevant. I began working to satisfy my own standards, not somebody else’s, and I think that was really important for me at that moment in time.”

Miljacki then got her MA in architecture at Rice University, and entered the PhD program at Harvard University — where she wrote about postwar Czech architects and their struggles to practice and live under socialism as her dissertation.

In doing so, Miljacki was, in a distant way, digging into her own past, given her parents’ lives as architects in the former Yugoslavia. Her writing about Czech architects was “informed by my experiences in Serbian context, having watched my parents there. But I didn’t want to be a historian of my backyard.”

Miljacki’s academic career then took her to Columbia University, before she was hired on to the MIT faculty. For her research, design projects, and teaching, she was granted tenure in 2017.

Miljacki’s own design projects are numerous. She has been principal in the design firm Project_ since 2002, and has designed and curated a long list of exhibitions. The highest-profile of these efforts was the U.S. pavilion at the Venice Biennale in 2014, called “OfficeUS” and co-curated by Miljacki, Eva Franch I Gilabert, now director of the Architectural Association school in London, and Ashley Schafer, a professor at Ohio State University.

Spurred by the event’s director, famed architect Rem Koolhaas, to dig into architectural history, the U.S. pavilion depicted a modernist office with pamphlets on the wall that themselves presented historical research about the spread of U.S. architecture around the world during a period when the country’s “soft power” expanded globally.

“The century has been the ‘American Century,’ so the pavilion had a real responsibility to think about how the U.S. had impacted the world during that century,” Miljacki says. “Our project, OfficeUS, was about starting a conversation. It was the first time the body of American architecture abroad was ever constituted as such.”

Miljacki also recently co-edited a book of essays about the architectural profession and issues of authorship, influence, reproduction, and copyright.

“[People] are exposed to immense amounts of work, through images,” Miljacki says. “This is unprecedented. And so … there is much more copying in the most superficial of ways, across the board.”

Still, beyond research, writing, designing, and curating, Miljacki emphasizes that she always feels at home while teaching.

“It’s always been about students first,” Miljacki says. “And the MIT students are amazing. … They are both earnest and sophisticated. They are thoughtful and open to being taught, and they’re good students.” She adds, “The students at MIT have the best time. They are able to go across the spectrum of our discipline groups and faculty, and in the end tailor their particular academic diets to their own interests.”

So while life as an architecture student may never be utopian, thanks to people like Miljacki, it is getting closer, day by day.