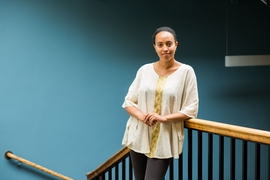 ↓ Download Image
Caption: “We are overusing natural resources. Why not be efficient with the climate?” Alpha Arsano says. “It is a misconception that building energy-efficient structures is more expensive. In the long-term it is much cheaper.”

Caption:
“We are overusing natural resources. Why not be efficient with the climate?” Alpha Yacob Arsano says. “It is a misconception that building energy-efficient structures is more expensive. In the long-term it is much cheaper.”

Alpha Yacob Arsano is standing next to the MIT Chapel’s marble altar, admiring the view through the domed skylight above. Outside, water surrounds the cylindrical red-brick structure like a shallow moat. Inside the chapel, the brick walls ripple like waves. Tiny windows line the walls and face downward so guests can see slivers of the moat. When sunlight reflects off the water at a certain angle, it shines into the chapel and dances onto the walls.

Arsano, who just earned a master’s in architecture studies and will continue in the fall in MIT’s PhD program in building technology, admires the different qualities of many buildings on campus. But none compare, in her mind, to the MIT Chapel. She says she is captivated by the structure’s simplistic beauty and its ability to seamlessly interact with components of the outside world in a spiritual, sustainable, and striking way.

Bringing environmental elements — specifically, natural ventilation — into a built structure is also a key focus of Arsano’s own work. For the past two years, she has been developing a digital design tool for early-stage building projects that can inform architects and engineers about how well a natural ventilation system could work to provide fresh air and cooling to the building they’re planning.

When a user inputs a building’s location, yearly climate and weather patterns, and some initial parameters such as the building type (residential, commercial, etc.) and materials, Arsano’s program, named “Clima +,” can predict how well the building should function with natural ventilation. For example, using Clima +, planners might find that an apartment complex in Phoenix, Arizona, could sustain its cooling needs for 50 percent of the year with natural ventilation.

Although other tools claim to provide the same predictive information, Arsano and her advisor, Christoph Reinhart, an associate professor of architecture, were skeptical about these claims.

“I found that they were not telling the full story of the predictability of natural ventilation potential,” Arsano says. “There were some missing links. For example, people, machines, computers, and lighting might influence indoor temperatures to be higher than outdoor temperatures.”

Arsano believes Clima + addresses these details and provides a clearer prediction for a building’s maximum natural ventilation potential. She says this method should be useful for architects since it would provide guiding information as the building’s design progresses. Overall, she hopes that Clima + contributes to the rise of sustainable buildings that take advantage of the fresh air around them rather than relying solely on heating and air-conditioning systems. Arsano says sound research has also demonstrated the long-term cost efficiency of implementing sustainable and natural ventilation techniques.

“We are overusing natural resources. Why not be efficient with the climate?” she says. “It is a misconception that building energy-efficient structures is more expensive. In the long-term it is much cheaper.”

Arsano’s focus will remain on natural ventilation as she transitions into her PhD. However, she is thinking about investigating related topics, such as the implications of climate change. Prior to the advancement of mechanical technology in the 1900s, Arsano says natural ventilation was at the core of architecture. She hopes to bring this approach back to the forefront of the practice today.

Before starting her master’s program at MIT, Arsano was a one of seven students from around the world accepted to join the Transsolar Academy in Stuttgart, Germany. Transsolar is a leading climate engineering firm that specializes in green building consultation. For a year, she learned the fundamental concepts of building physics and used digital design tools to develop environmentally responsive design ideas for a wine factory in Italy and a commercial urban corridor in Addis Ababa, Ethiopia.

Arsano says her time in Germany exposed her to the more empirical, scientific side of architecture and its focus on research methodology.

“I really liked how we were working there. I wanted to take it further so I started to look for programs which had similar paths,” she says. “[MIT] was really fascinating because students aren’t just taking courses; they also become part of a research group. I was looking for that.”

Arsano grew up in Addis Ababa. Her childhood was filled with outdoor activities that gave her the opportunity to engage in the city life. She says these experiences helped form her interest in the physical and cultural facets of the city, which she explored during her undergraduate studies in architecture. She also remembers making visits to see family in the more rural parts of Ethiopia, where she was struck by the differences in lifestyle compared to her home city.

“The difference between developed and developing countries is urbanization. You might not find electrical lights in some places or even [piped] water,” she says. “The vernacular houses [built with traditional methods and local materials] are how people live together. Even for me, it was a cultural difference.”

Arsano says living in Germany for a year was a delightful new experience. Participating in a program where half of the fellows were women was also unusual. When she started school at the Ethiopian Institute of Architecture in Addis Ababa, women made up one-fourth of the class of architecture students, she estimates. When visiting construction sites, she noticed that most of the workers and civil engineers on site were men. She believes the gender balance is starting to shift, but she still considers equal opportunity for women to be a critical issue in architecture.

While at MIT, Arsano has volunteered for the Association of Ethiopian Women in Boston and spoken at community events about questioning cultural norms by using lessons from the scientific method.

Arsano’s outreach work in Boston’s Ethiopian community has extended to children’s education as well. At the invitation of a fellow Ethiopian engineer, Sintayehu Dehnie, Arsano and several other MIT students have been participating in a program for children ranging from 4th grade to high school.

“I engage with the community when I get the chance,” says Arsano. “Children ask you the weirdest questions ever. They ask questions you cannot answer. I really like mapping children’s minds.”

The MIT Chapel is empty except for two other people. One man walks up to a section of the brick-wall where the bricks have been laid so that it appears the wall has Rubik’s cube-sized holes between each brick.

The man, a visiting architect from another country, asks Arsano if she knows whether these holes serve a practical purpose. She isn’t sure. Without knowing Arsano or her work, the man postulates that they might allow fresh air from outside to come through. “Could be,” Arsano replies.

She walks outside to check the other side of the wall for evidence that the pores go all the way through. It appears that they don’t — perhaps a missed opportunity for the MIT Chapel to reap the benefits of natural ventilation.