An innovation plan to beat Covid-19 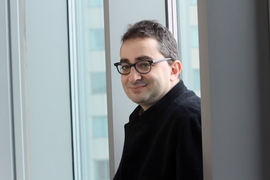 ↓ Download Image
Caption: “There aren’t many ways to escape the apparent choice between protecting public health and protecting the economy,” says MIT economist Pierre Azoulay. “There is only one, and that’s innovation.”
Credits: Image: Allegra Boverman

Caption:
“There aren’t many ways to escape the apparent choice between protecting public health and protecting the economy,” says MIT economist Pierre Azoulay. “There is only one, and that’s innovation.”
Credits:
Image: Allegra Boverman

For humans, the Covid-19 virus is a novel foe. And to combat a new pathogen, we need innovation: a new vaccine, new drugs, new tests, new clinical knowledge, and new data for epidemiology models.

In response to the current crisis, many private companies and some governments have been trying to generate a vaccine and other medical advances in short order. And yet, whatever progress is being made, we can do better, suggests an MIT professor who has spent two decades studying the foundations of life-science breakthroughs.

“There aren’t many ways to escape the apparent choice between protecting public health and protecting the economy,” says economist Pierre Azoulay. “There is only one, and that’s innovation.”

In an editorial published today in Science, Azoulay and his colleague Ben Jones PhD ’03 of Northwestern University call for a new approach to generating biomedical breakthroughs: a federal Covid-19 Defense Research Committee (CDRC), echoing the famous National Defense Research Committee (NDRC) that the U.S. launched in 1940 and used to support some of the innovations that helped win World War II.

In this vision, the CDRC would be a central agency funding a wide array of Covid-19 research projects, with unusual speed and a repository of research knowledge. It would also represent a bargain, compared to other checks the federal government has written in response to the pandemic.

“I think we need something built on the model of the NDRC that basically coordinates public and private efforts and ensures transparency of information,” Azoulay says.

Azoulay and Jones are well-placed to make such a proposal. Azoulay, the International Programs Professor of Management at the MIT Sloan School of Management, has spent two decades building a unique database of biomedical scientists, examining the economics and intellectual dynamics of breakthrough research. Jones, a graduate of MIT’s Department of Economics, is a professor of entrepreneurship and strategy at Northwestern’s Kellogg School of Management; he has risen to prominence by studying the evolution of the scientific enterprise and the professional characteristics of star scientists.

As the two scholars see it, such an agency would create several distinct advantages for the public in the way it would support science.

Science is sometimes perceived as a big-ticket item in the federal budget. But during the current crisis, supporting science is relatively inexpensive. Suppose the U.S. federal government poured $18 billion into the prosposed CDRC effort. That would pale in comparison to the more than $2 trillion it has already spent during the pandemic.

Moreover, the daily loss in U.S. GDP during the crisis is, in fact, about $18 billion. So if enhanced federal science funding accelerated vaccine production or effective medicines by a few months, that investment would pay off many times over.

To increase our chances of scientific success against Covid-19, Azoulay and Jones believe, the government should support an extremely wide array of projects. Why? Because any one project is unlikely to succeed, but many of them, together, are more likely to hit paydirt. Suppose the government supported 10,000 research projects, and each one had just a 0.1 percent chance of being a major advance. Even so, Azoulay and Jones note in the Science article, there is a 97 percent chance that at least five of those projects would constitute “an advance in prevention, treatment, or infection control.” Spread your bets, and you will find winners.

“It’s not just spending more money, it’s how you’re going to spend it,” Azoulay says. “There is a real chance we’re going to pile too much money too early into too narrow a set of approaches. There needs to be an impetus from above to force this exploration of parallel paths.”

So while a few vaccine candidates have gained considerable attention, it is possible none of those will work. Currently there are reportedly close to 130 serious vaccine-development projects globally, many of which use novel methods.

‘There are lots of different approaches,” Azoulay observes. “And that’s one thing that gives me hope. In the track record, rates of failure are extremely high. Thank God we have 130 [vaccine candidates]. If we had 20, I’d say failure is almost guaranteed.”

Moreover, vaccines are just one area of innovation, Azoulay adds: “Obviously there is a lot of excitement about the potential for a vaccine. But [there is also] infection control, testing, therapeutics, epidemiology — it takes a real coordinating effort to do this well.”

Scientific progress against Covid-19 cannot come soon enough, given a global death toll over 250,000 and worldwide economic closures. As Azoulay and Jones outline it, a CDRC agency would fast-track research grants. Azoulay suggests the National Institutes of Health (NIH), for one, could give ultrarapid approval for well-qualified researchers: “If you’re an NSF [National Science Foundation] or an NIH principal investigator who’s gotten a research grant for your lab in the last five years, and your lab is still running, the government should cut you a check in a week, with the idea it would support a year of research.”

For doctors hoping to perform clinical research based on the Covid-19 patients they are observing in hospitals, Azoulay adds, “They should be funded on the basis of a two-page proposal, in a week. The infrastructure exists in the academic medical centers to do this.”

For the private sector, the government could encourage investment numerous ways: by making loans that are forgivable with proof of research efforts, or by tweaking the R&D tax credit to make it specific for Covid-19 research. More speed, Azoulay adds, is related to the issue of scale. The pandemic has grown so rapidly that even big biomedical companies have not been able to scale up testing as quickly as the virus has spread in the U.S.

“The market works,” Azoulay says. “It’s just that it works at a cadence that is inappropriate to the particular moment that we face. And that’s a rationale for government intervention.”

One key function of the CDRC that Azoulay and Jones propose is to be a clearinghouse — an agency keeping close track of research projects, to help scientists understand which kinds of projects are underway, and which research areas lack coverage.

“For the public sector, we can identify areas that we think are underinvested in, and plug those holes,” Azoulay says. “But it’s also important for private-sector actors.” Often, Azoulay adds, pharmaceutical companies work with “murky signals” about what their competitors are doing. But when it comes to the pandemic, he thinks, “Pfizer should understand what Merck is doing, and vice versa.”

As Azoulay acknowledges, the entire CDRC idea is prospective. Still, at a time when a strong federal response could address the vast scope of the pandemic, he and Jones want to remind policymakers that, just as the U.S. helped build an innovation ecosystem in the 1940s, it can do it again.

“The precedent is World War II, if you think about the number of lives at stake, and the sense of urgency we need,” Azoulay says.

A business edge that comes with age

How to encourage big ideas