A business edge that comes with age 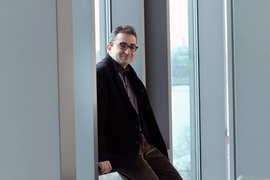 ↓ Download Image
Caption: Pierre Azoulay, the International Programs Professor of Management at the MIT Sloan School of Management, is co-author of a newly-published paper finding that the average age of the most successful start-up founders is 45 — much higher than popular imagery often suggests.
Credits: Image: Allegra Boverman

Caption:
Pierre Azoulay, the International Programs Professor of Management at the MIT Sloan School of Management, is co-author of a newly-published paper finding that the average age of the most successful start-up founders is 45 — much higher than popular imagery often suggests.
Credits:
Image: Allegra Boverman

Two years ago, MIT economist Pierre Azoulay started a lively discussion when a working paper he co-authored, “Age and High-Growth Entrepreneurship,” revealed a surprising fact about startup founders: Among firms in the top 1/10 of the top 1 percent, in terms of growth, the average founder’s age is 45. That’s contrary to the popular image of valuable startups being the sole domain of twentysomething founders, such as Mark Zuckerberg of Facebook.

The paper, written with Benjamin Jones of Northwestern University, J. Daniel Kim of the University of Pennsylvania, and Javier Miranda of the U.S. Bureau of the Census, has now been officially published, in the journal American Economics Review: Insights. MIT News spoke to Azoulay, the International Programs Professor of Management at the MIT Sloan School of Management, about the finding and the discussion it has generated.

Q: What has been the response of people to the study?

A: We’re documenting a fact, and that fact either accords with people’s intuitions, or it doesn’t. Some people are genuinely surprised because they’ve lived in the current zeitgeist, and then once they start thinking about it, they say, “Ah, it makes sense.” And then there are people who say, “Oh, I knew it all along!” But Silicon Valley venture capitalists have studiously avoided engaging with what we’ve done. And I don’t know why.

I think one line of [venture capitalist] skepticism is to say, “Well, you may well be right, but you’re studying the one-in-a-thousand firm, and we’re [investing in] the one-in-a-million firm.” Which is sort of like restating that Apple, Microsoft, and Google were founded by young people.

Yes, we already knew it is possible for very large, successful firms to be founded by very young people. The question is: Is it likely?

Q: As you continue to think about this subject, is it possible to say what accounts for the success of relatively older entrepreneurs? Experience, intellectual capital, greater business connections — what matters?

A: All of those things are not mutually exclusive, and they’re all likely to play a role. They just need to be studied separately, if you will. We have to remain agnostic. But there is one key point in my view. Forget experience: How about just knowledge? I like to say there is no such thing as a 25-year-old biotech entrepreneur. That person just doesn’t exist, because you need a PhD and three postdocs [to gain high-level knowledge]. There are lots of fields where if you want to make a contribution, you have to bring yourself to the frontier of knowledge in a domain, and that takes time. And that’s not going to be the realm of the 22-year-old.

Beyond the big platform IT companies, if you’re thinking about the broader swath of entrepreneurship across a multiplicity of sectors, then you have to acknowledge this point. In some sense, if you recognize the diversity of startups, the [founder’s] age number is going to be higher than if you’re only focused on super-high-value Silicon Valley internet companies. So we need a basic attitude adjustment.

Q. Even as people mythologize the young startup founder, there is also a tech-sector ethos that heralds serial entrepreneurship and tolerates failure, because you’re taking risks and learning by doing. Isn’t that one Silicon Valley notion that might correspond to what you discovered?

A: Yes, one thing that could explain our results is entrepreneurship being an activity you can learn to do better over time. That’s certainly something we’ve heard. We can’t pin it down, but if I had to think of the most likely stories, that’s certainly one. Even within a particular sector that demands a certain amount of intellectual capital, holding that constant, even within biotech or clean energy, you might think there is something about learning by founding, which is going to lead to a correlation between success and a higher age for founders.