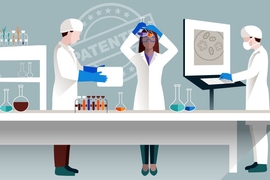 ↓ Download Image
Caption: In a study of 365,000 NIH grants — nearly every NIH grant awarded for 27 years — researchers found that 31 percent produce articles that are later cited by patents in the biomedical sector.
Credits: Image: Christine Daniloff/MIT 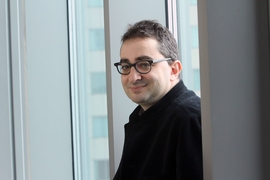 ↓ Download Image
Caption: “The impact on the private sector is a lot more important in magnitude than what we might have thought before,” says professor Pierre Azoulay about research grants issued by the National Institutes of Health (NIH).

Caption:
In a study of 365,000 NIH grants — nearly every NIH grant awarded for 27 years — researchers found that 31 percent produce articles that are later cited by patents in the biomedical sector.

Caption:
“The impact on the private sector is a lot more important in magnitude than what we might have thought before,” says professor Pierre Azoulay about research grants issued by the National Institutes of Health (NIH).
Credits:
Photo: Allegra Boverman

Research grants issued by the National Institutes of Health (NIH) contribute to a significant number of private-sector patents in biomedicine, according to a new study co-authored by an MIT professor.

The study, published today in the journal Science, examines 27 years of data and finds that 31 percent of NIH grants, which are publicly funded, produce articles that are later cited by patents in the biomedical sector.

“The impact on the private sector is a lot more important in magnitude than what we might have thought before,” says Pierre Azoulay, a professor at the MIT Sloan School of Management, who is one of the authors of the paper.

After reviewing over 365,000 grants — making this a uniquely large study — the research also finds that over 8 percent of NIH grants generate a patent directly.

Intriguingly, the researchers also find no significant difference between “basic” or “applied” research grants in terms of the frequency with which those projects helped generate patents; both kinds of research spill over into productive private-sector uses.

“If you thought the NIH exists in an ivory tower, you're wrong,” Azoulay says. “They are the nexus of knowledge that really unifies two worlds.”

The paper, “The Applied Value of Public Investments in Biomedical Research,” is co-authored by Azoulay, who is the International Programs Professor of Management at MIT Sloan; Danielle Li PhD ’12, an assistant professor at Harvard Business School; and Bhaven Sampat, an associate professor at Columbia University’s Mailman School of Public Health.

The NIH, which has its main campus in Bethesda, Maryland, encompasses multiple research institutes and is the world’s biggest source of public funding for biomedical research, dispersing about $32 billion annually in grants.

To conduct the study, the scholars examined 365,380 NIH grants funded between 1980 and 2007 — nearly every NIH grant awarded for decades. Exactly 30,829 were the direct basis for patents; 17,093 of those were so-called “Bayh-Dole” patents issued to universities and hospitals, something federal legislation made possible starting in 1980.

And as the authors put it in the new paper, even these NIH-backed research projects that are indirectly cited in later patents “demonstrate the additional reach that publicly funded science can have by building a foundation for private-sector R&D.”

Azoulay, an economist who studies the production and dissemination of scientific knowledge, says the bottom-line figures in the study — the 31 percent and 8 percent of NIH grants that contribute to and more directly generate patents — strike him as being significantly large because of the broad scope of research the NIH supports.

“There is a lot of research we wouldn't necessarily expect to be relied upon in a patent,” Azoulay explains.

He also noted that such research can be characterized as either “basic” or “applied”; the researchers found little difference in the long-term patent-creating productivity of those categories.

For instance, some research projects can be considered more directly “disease-oriented” than others, but even by this yardstick, the frequency of patent generation does not vary greatly. About 35 percent of “disease-oriented” NIH grants led to patents, compared to 30 percent otherwise.

“Grants produce papers, and papers are cited by patents used by pharmaceutical firms,” says Azoulay. “It's hard to think of an innovation [in biomedicine] that doesn't have a patent.”

The current project is one of multiple related studies that Azoulay and his colleagues — including Li, who will jon the MIT faculty in July 2017 — have conducted on the impact of publicly funded science.

A 2015 working paper released by Azoulay, Li, Sampat, and Joshua Graff Zivin, a professor at the University of California at San Diego, estimated that every $1 of public NIH funding yielded between $1.5 and $2 in private-sector pharmaceutical drug sales. That study is still undergoing peer review.

The current research was conducted partly with the support of the National Science Foundation’s Science of Science and Innovation Policy program (SciSIP).

Newsweek reporter Jessica Wapner writes about a new study by MIT researchers that provides evidence that NIH funding contributes to a large number of patents in the field of biomedicine. The findings indicate that NIH-funded research “is not being done in an ivory tower,” explains Prof. Pierre Azoulay. “Companies use it as input in their own discovery efforts.”

Reporting for the PBS NewsHour, Nsikan Akpan highlights a new study co-authored by MIT researchers that examines how many NIH grants lead to new patents and medications. Prof. Pierre Azoulay explains that the study, “provides evidence that the research done in the public sector is useful — it’s relevant for the research done by private-sector firms.”

Nature reporter Elie Dolgin writes about Prof. Pierre Azoulay’s new research that shows NIH funding has a significant impact on innovation in the field of biomedicine. Azoulay explains that from an economic standpoint the U.S. is “under-investing overall” in biomedical research.

A study by Prof. Pierre Azoulay demonstrates the significant impact of NIH funding on biomedical patents, reports Carolyn Johnson for The Washington Post. Azoulay explains, “if your view was that the research done by academics...[has] no ramifications for the real world and the development of new medicines — well, that view is not correct.”