Tackling poverty, one person at a time 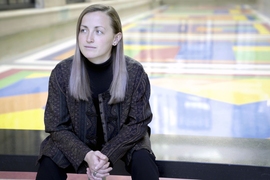 When Staten Island-native Sarah Tress first arrived at MIT, she had never been outside of the United States. Now, almost four years later, she’s travelled across Asia, spending weeks at a time in India, Vietnam, and Indonesia. But the reason for all this travel hasn’t been sightseeing — she’s been working to reduce poverty, one person at a time.

Tress began her studies at MIT on a premed track. However, a MISTI internship at a hospital in a poor region of India in the summer after her first year made her feel there was a different application for her skills. Seeing homeless people living just outside the hospital’s gated entrance, and recognizing her privilege as an MIT student and a U.S. citizen, she shifted her goals.

“There are so many people trying to get so few med school spots, a lot of people would happily take my spot if I were to get in. But working to fight poverty is not nearly as popular of a career choice,” she says.

While those in the medical field may see more of an immediate impact to their work, Tress feels  each individual effort to fight poverty makes a difference. Poverty may be a broad and international problem — but we have to start somewhere, she says.

Tress was awarded the prestigious Rhodes Scholarship last November for her work in developing countries. But before that, she was a mechanical engineering major who wanted to make an impact — and she happened to take a class on wheelchairs that would inspire her to do just that.

In her sophomore year, Tress took EC. 721 (D-Lab: Mobility Wheelchair Design in Developing Countries), a class about wheelchairs, offered by MIT D-Lab. She learned that pressure sores — areas of damaged tissue that arise from sitting or lying down too long with improper cushioning — were one of the leading causes of preventable death for people with disabilities in developing countries.

Wheelchairs in these countries typically come with one foam cushion that costs under $10. The cushions flatten quickly, becoming ineffective, but due to financial limitations or lack of access users often don’t replace them. The best cushions cost up to $400, making them out of reach for many low-income users.

With support from the Ella Lyman Cabot Trust and a Tau Beta Pi Engineering Service Grant, Tress spent weeks the following summer visiting wheelchair factories in Vietnam and interviewing wheelchair users in Indonesia, getting a better sense of their needs. It wasn’t the easiest trip.

“Traveling solo throughout Southeast Asia for six weeks is definitely a challenge of its own, which involves losing credit cards. And getting sick by yourself is terrible. But the learning experiences were great,” she says.

She came up with an idea for a new cushion — one that would be high in quality, like the $400 version, but at a cost of $10 or less. With support from the D-Lab, she designed a product with three bicycle inner tubes looped through a plastic base, forming an array of air cells. The aim was to make a cushion with a simple design and easy-to-find components, which users could either fix them themselves or buy replacements for. That device — now named Loop — has since been fashioned into a prototype, with hopes of passing on the project to other MIT students in the coming years.

In addition to her mechanical engineering major, Tress has also pursued a concentration in ethics. She is deeply engaged by questions of right and wrong, and is fascinated by the absence of easy answers.

“Most ethical, moral questions for me are very gray, and it’s very hard to say definitively this is good, or this is bad,” she says. “I really like thinking about those questions, because people are too quick to say something is good or too bad.”

As she’s gotten more involved in reducing poverty, she’s started to take more classes in the School of Humanities, Arts and Social Sciences, and cites 24.236 (Topics in Social Theory and Practice), 14.74 (Foundations of Development Policy), and 17.317 (U.S. Social Policy) as among the most influential. “I can't imagine being an effective engineer attempting to reduce poverty without understanding the complexity of poverty,” Tress says. “These classes have helped me understand the world as a whole. Engineering of course is great, because it lets you do things that are really great for the world, but if you don’t understand the context that you’re putting it in, you’re … not as great of an engineer.”

The art of engineering

An ACL tear in her senior year of high school dashed Tress’s hopes of playing on MIT’s varsity soccer team, but that hasn’t stopped her from enjoying the sport. She’s an active player on the club team, where she’s been a co-captain since her junior year, and enjoys being part of a community that plays just for the love of the game.

Participating in DanceTroupe for four years has also been a great experience. She started with beginner dances, but now participates in four advanced routines per semester, ranging from hip hop to bhangra and anything in between. Art is another hobby that she’s frequently trying to find time for. Last year, she painted a mural in her East Campus bedroom, of the famous painting “The Great Wave off Kanagawa.” This fall, she also took 21M.601 (Drawing for Designers), where she learned how to draw the human figure. For her, art and engineering aren’t separate.

“I consider the engineering stuff I do to be the same kind of artistic outlet. It’s very hands on when I’m machining things or just actually making the physical products,” she says. “For me that’s like a way to do art.”

Tress has been an undergraduate apprentice in MIT's mechanical engineering shop, the Pappalardo Lab, for the past two years, where she has served as a shop TA for 2.007 (Design and Manufacturing I). When she took this class as a sophomore, she had to create a robot to be entered in a class competition. Because this was her first experience with fabrication, she was unsure of how to use many of the machines and felt extremely self-conscious. She noted that many of the annual winners were males, who often had more prior experience in robotics or relevant fields than their female counterparts. In the end, however, she built a robot she was proud of and became comfortable with those machines that once confounded her.

“Part of being a Pappalardo Apprentice for me is being able to show women in 2.007 that they can overcome the disadvantages they may have faced throughout all of the years before, and can be amazing mechanical engineers that can make designs and products they are really proud of, with just a bit of grit,” Tress says.

“I want to show that the face of success in mechanical engineering at MIT is not a male one, but anyone.”

When Tress found out that she had been awarded a Rhodes Scholarship, she and her family were stunned. She says she is incredibly grateful for the opportunity.

“Many people deserve awards like these, but it is more often luck and privilege that determines who gets them,” she says. “I am so privileged and lucky to have received an opportunity so few who completely deserve it will ever get, and so I will use it to the best of my ability to create opportunities for others.”

As a Rhodes Scholar, Tress will attend Oxford University, where she will pursue an MPhil in development studies. She has a firm foundation in engineering from her time at MIT and wants to spend the next few years getting a deeper understanding of how poverty arises and how it can be reduced. She doesn’t know exactly what her next project will look like, but she wants to use her skills and her understanding to have the greatest possible impact on alleviating suffering in the developing world.

“Part of it is learning what approaches to development exist so that I get a better understanding of where I could fit in within the whole big picture,” she says.