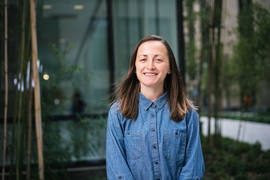 MIT senior Sarah Tress has been named a Rhodes Scholar. She will commence graduate studies at Oxford University next fall.

Each year, 32 Rhodes Scholars are chosen from among hundreds of American applicants. At Oxford, they will join an international cohort of Scholars selected from more than 60 countries. The scholarship provides full funding for two years of graduate study at Oxford.

Founded in 1902, the Rhodes Scholarship is one of the most competitive and prestigious international fellowship programs. Rhodes Scholars are selected on the basis of academic excellence, character, leadership potential, and commitment to making a positive difference in the world.

“MIT’s Rhodes Scholarship applicants embody the intelligence, curiosity, and civic-mindedness that together represent MIT at its very best,” says Professor Will Broadhead, who co-chairs the committee along with Professor Rebecca Saxe. “Working with this year’s group of applicants through the Distinguished Fellowships process has been as rewarding and humbling as ever. Sarah exemplifies the determination and vision that characterize the most deserving winners of the Rhodes and can rightfully be very proud of her achievement.”

Tress, from Staten Island, New York, is an MIT senior majoring in mechanical engineering. As a Rhodes Scholar, Tress will pursue an MPhil in Development Studies at Oxford. She envisions a career in humanitarian engineering, using her skills as an inventor and designer to create affordable, appropriate technology solutions for the developing world.

Tress spent the summer after her first year at MIT as a biomedical engineering intern at LV Prasad Institute in Hyderabad, India. She developed Bullseye, a cost-effective corneal topography device that attaches to any smartphone for rapid diagnosis of the eye condition keratoconus, which earned her an innovation award. Upon returning to MIT, Tress became involved with MIT D-Lab, which strives to apply engineering design principles for innovating practical solutions to global poverty challenges.

Tress took a D-Lab class on mobility technologies in the developing world, where she learned about the problems faced by wheelchair users. Inspired by this experience, she created Loop, a low-cost inflatable wheelchair seat cushion made from bike inner tubes, which can help prevent pressure sores. Tress spent two summers field testing the product in Indonesia, and Loop has received $40,000 in funding from multiple sources including the IDEAS Global Challenge, the Legatum Center, the MIT Sandbox Innovation Fund, and the Ella Lyman Cabot Trust.