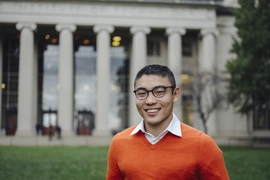 ↓ Download Image
Caption: After graduating from MIT with a degree in mechanical engineering and a minor in management science, Chun aims to earn a master's degree in engineering science at Oxford University. After he returns to the United States, Chun plans to begin law school with a focus on intellectual property.
Credits: Image: Ian MacLellan

Caption:
After graduating from MIT with a degree in mechanical engineering and a minor in management science, Chun aims to earn a master's degree in engineering science at Oxford University. After he returns to the United States, Chun plans to begin law school with a focus on intellectual property.
Credits:
Image: Ian MacLellan

Matthew Chun understands the difficulty of bringing new technologies from conception to market. The MIT senior and Rhodes Scholar co-founded Need-A-Knee, LLC his sophomore year, after working on a class project to invent a prosthetic device that helps above-knee amputees sit cross-legged.

The class was EC.722 (Prosthetics for the Developing World) offered through the D-Lab. Chun’s student group worked closely with clinics in India while honing the design. The prosthesis “helps amputees sit cross-legged, which is really important culturally in a place like India, but also functionally helps them put on their pants, tie their shoes, and move in and out of tight spaces,” Chun says.

After creating a prototype, Chun and his classmates took it to India for testing. There, they got feedback from users and published a paper about the device for a mechanical engineering conference. While most of the students in the group moved on after the project, Chun had a reason to stay.

Soon after he returned to Cambridge, one of the users he tested the product with reached out to him online. “He kept asking, ‘When am I going to be able to buy this product?’” Chun recalls.

“There are people out there expecting that at some point they’ll be able to use [the prosthesis],” he says, recalling the moment he realized the project needed to move forward. “We’ve got to follow through with this at least to the point where all the people we’ve tested it with have a product they can use.”

Since then, Chun has focused on learning about bringing the device to users around the world, an endeavor which has led him to explore intellectual property law.

“Protecting our intellectual property for this device ended up being super important for our ability to take it to a market like India where the profit margin for prostheses is extremely low,” Chun says. “That’s what got me interested in law — the appreciation for the importance of intellectual property and a heightened awareness of the pitfalls that people who are starting innovative companies can easily fall into. … It was all incredibly interesting to me.”

After graduating from MIT with a degree in mechanical engineering and a minor in management science, Chun aims to earn a master’s degree in engineering science at Oxford University. After he returns to the United States, Chun plans to begin law school with a focus on intellectual property.

During his junior year, Chun began to work at Fish & Richardson P.C., a global intellectual property law firm, as a technology specialist. The job, which Chun continues today, gives him firsthand experience with national and international patenting processes. Chun says the experiences he’s had on the job have “played a really important role in helping me decide that I want to start my career in intellectual property law.”

The same year, Chun took STS.081J (Innovation Systems for Science, Technology, Energy, Manufacturing, and Health), taught by William B. Bonvillian, former director of the MIT Washington Office and a lecturer in MIT’s Program in Science, Technology, and Society and the Department of Political Science.

“[The class] was very influential for me,” Chun says. “At that point, I had started branching out from pure engineering to thinking about how technologies go from research and development to scale, and I began to see how policy and finance was really important to that. Dr. Bonvillian’s course tied together all my different experiences and gave me a structured framework to think about these things.”

Chun also continues to work on Need-a-Knee with his co-founder, Matthew Cavuto ’17, as well as junior Wasay Anwer and other members from the MIT community. Chun cites the help and mentorship of Murthy Arelekatti, a graduate student in the Department of Mechanical Engineering and member of the Global Engineering and Research Lab (GEAR). He also credits Amos G. Winter, an associate professor and director of the GEAR Lab, for his guidance on presenting Need-a-Knee’s progress at conferences and signing off as principal investigator on their projects. Need-a-Knee also received important help from various startup resources on campus, Chun says.

“There have been a ton of startup resources we’ve been able to utilize to get advice to further our project,” Chun says. They include the MIT IDEAS Global Challenge, the Legatum Center for Development and Entrepreneurship, the MIT International Science and Technology Initiatives (MISTI), and the MIT Sandbox Innovation Fund.

Chun values community-building and considers it a major component of his MIT education. He serves as co-editor-in-chief of MIT et Spiritus, a student-run publication on Christian thought. He authored an article that appeared in the publication’s inaugural issue in 2016, titled “Engineering for God and Humanity.”

“The goal of the publication is to foster healthy discussion about spirituality on campus and to think critically about how faith affects every aspect of our lives as MIT students,” Chun says. He has high hopes for the publication’s future and plans to hand over the reins to a sophomore before he graduates. Chun is also a member of MIT Cru, a faith-based student group. During his time at MIT, Chun has hosted Bible studies in his dorm room and says the community has been an integral part of his MIT experience.

“You see the development of your own peers from freshman through sophomore, junior, and even senior year,” Chun says. “Interacting with people who are in the same situation that I was in just a few years ago, helping them figure out their way around MIT, and providing a place for them to come talk about their struggles and successes … it’s really valuable.”

Additionally, Chun has wrestled competitively since his freshman year of high school and is currently the captain of the MIT wrestling team.

“Other than my faith, I think wrestling has really shaped my character more than anything else I’ve ever done. You just learn a lot about perseverance, discipline, and working through adversity,” Chun says. “It gave me a certain amount of mental toughness. I think that really helped carry me through my four years here and has made me the person I am today.”

Chun has high hopes for the future ahead of him.

“There’s a lot of room for building intellectual property frameworks in developing parts of the world where you can actually encourage innovation and the sharing of technologies,” he says.

While Chun intends to formally study law, he’s most interested in using it to help bring meaningful technologies to market in developing countries, whether that means he’ll be a practicing lawyer or not.