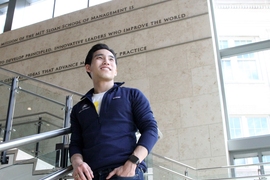 MIT Sloan Fellow James Fok attributes his early interest in science and engineering to spending many of his childhood days in Hong Kong’s Kai Tak International Airport, where his father was a senior air traffic control supervisor.

“He took me to the control tower to see the flights, and I’ve always been fascinated by the question of why, I guess. I always asked my dad ‘Why this? Why that?’ and when I started going to high school, I always had a particular interest in physics and chemistry,” he recalls.

Fok also liked figuring out how things work, so after attending boarding school in the U.K., he went on to major in mechanical engineering at Imperial College. While there, he immersed himself in both basic research and the advent of startup culture.

That combination of engineering and business led Fok to conclude that a lack of financial savvy was impeding the availability of engineering solutions to the general public. “Even with a good idea, very often [scientists are] asking for silly money and no one’s ever going to fund it,” he says. “Just because you have a good idea doesn’t mean you’re going to make money. So I talk to money people, and they don’t know how innovations work, and I talk to scientists and engineers and they don’t know how money works, and it’s just frustrating.”

The realization that Fok could bridge this gap set him on a new path: to “bring engineering to the market by being the financier of it,” he says.

Fok became a citizen of the world at a young age, moving from Hong Kong to the U.K. countryside for boarding school. There, he learned English alongside other students from Turkey, Russia, and Japan. The move to London for college was a more high-spirited global education. “More than any other city in the world, London is so international. The cultural diversity, the ethnic diversity, everything is evident. Different pockets of London have different cultures, are populated by different groups of people,” he says.

After graduating from Imperial, Fok spent time as a certified public accountant at PricewaterhouseCoopers, an experience that exposed him to an even wider world perspective. So when he was offered an internal position in Bahrain, he didn’t think twice about moving to the Middle East.

“Lo and behold when I got there, it was a completely different experience,” Fok says. “Despite thinking that I had known almost every different culture that I could think of, being embedded in the Middle East, where religion is at the forefront, taught me a cultural sensitivity that I thought I had, but didn’t.” It was a lesson in making space in his mind for a new culture — a lesson that Fok has brought with him to MIT.

Throughout his early career, Fok nurtured his interest in finance with positions in investment companies and startups — particularly those with a technological edge. Financial technology, or fintech, is a specific type of technology that reinvents the ways in which people interact with their finances. Fok believes this creates more freedom in the world, which is the type of solution he is driven to bring about.

“It’s not necessarily hard engineering problems, but very much with the ethos of solving problems to make life a bit better for people,” Fok says. “I see my role as not necessarily the person who does it but very much a part of the team that makes it happen. Given my interest in finances, I was always the person who would try and make the numbers add up. How do we make technology work?”

To Fok, there’s no better place than MIT to merge business with tech. So when he was deciding whether or not to take time out of his career, the Sloan Fellows program — a 12-month, accelerated MBA with a heavy emphasis on teamwork and leadership — made perfect sense.

Rather than asking himself if he could afford to do it, he realized he couldn’t afford not to keep up with rapidly advancing technologies. “New technology has come to the forefront that changed the world: machine learning. Love it or hate it, it’s going to change the world. It’s the same for cryptocurrency. So how often can you take the time to really dive into these topics even as a business person, even as a tech person?” Fok says.

Making the world a smaller place

He has immersed himself in MIT and Cambridge culture in his year at the Institute by living in the Sidney Pacific dormitory, participating on the MIT Driverless team, and spending time near the Charles River. He has also been involved in Sloan Pride and G@MIT, two of MIT’s LGBTQ+ organizations. The supportive environment he’s found at Sloan has allowed him to promote a shared agenda between LGBTQ+ people and allies to broaden diversity and inclusion. It’s a perspective that’s resonated within the Sloan Fellows program.

“To be an ally [means] if you see anything — it doesn’t matter if its anti-LGBT or racist comments — just if you hear it, whether it affects you or not, challenge it and be supportive,” Fok explains. “Whether you have friends in that situation or not, it doesn’t matter. Just be there. And I think that’s one thing that my fellows have been very supportive and proactive in, is just learning how to do that.”

In many ways, Fok feels the Sloan Fellows program is a microcosm of the world, with a rich diversity of cultures and perspectives — and that has made him feel at home. In his program alone, there are 111 Fellows from 40 different countries. The camaraderie among his cohort fosters an appreciation for differences in sexual orientation, race, and nationality. As a world citizen, living far from home, he counts these friends as family. Like he does in his travels, Fok cherishes the differences in perspectives he has gained from his diverse friend group.

“And certainly my friends see a different perspective because of me,” he says. “So I have always strived to see different cultures, and over the years I’ve tried to change from one place to another to try to learn different things. MIT is just the latest chapter of a very long journey.”

After MIT, Fok plans to follow the technologies that he thinks are changing the world, wherever they lead; he doesn’t feel committed to any particular city or country in his career. One reason for that freedom, he notes, is technology itself. In fact, he believes that FinTech helps make the world a smaller place — a place where he, and all of us, can connect internationally with ease.

“Technology has such an incredible way of linking and transforming every part of the globe,” he says.

Reliable energy for all