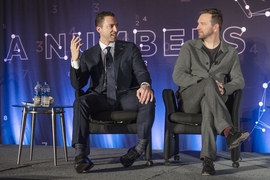 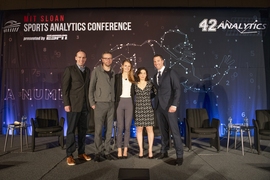 A former Major League Baseball pitcher has been expanding his repertoire this year at the MIT Sloan School of Management. Chris Capuano — an 18-game winner in 2005, an all-star in 2006, and a 12-year veteran who last pitched in 2016 — is part of the prestigious Sloan Fellows Program, earning his MBA in an accelerated one-year span. For Capuano, it’s a return to university life; he received his BA in economics from Duke University before reaching the majors.

MIT News spoke with Capuano at the 2019 MIT Sloan Sports Analytics Conference, where Capuano appeared on a panel discussing the use of tracking data in sports. During his career, Capuano twice returned from “Tommy John” surgery — replacement of an elbow ligament — and maintains an interest in using biomedical data in sports. He is also an advisor for Boston Biomotion, a startup developing a new resistance training system. This interview has been edited for length.

A: My experience has been exceeding expectations. There are 110 fellows in my cohort, and 14 Americans. The rest of the fellows come from I think 37 countries. So it’s an extremely diverse group, an experienced group. I think the average age is about 38, 39, and a lot of different industries are represented. So the content was what I expect from MIT. I know that I’m at MIT, given the quantitative nature and challenging nature of my classes. [But] the dynamism and diversity and just the quality of the other people, and the passion for solving some of these other big problems out there in the world, that’s what’s impressed me the most.

Q: You twice returned from major surgery, and pitched in the majors for 12 years without, in your own view, having remarkable ability by big-league standards. How much of your interest in analytics comes from seeking an edge in those circumstances? Or would it have been there anyway?

A: I think perhaps I would be there anyway. I was always very analytical and looking for ways to challenge myself and expand my thinking when I was a player. But certainly we’re all products of our experience. And I think my experience in battling through injuries and having some real ups and downs related to that, that’s probably the biggest factor that caused me to try to stay current with all the methods for optimizing performance and recovery. … Getting to the big leagues is hard. Staying in the big leagues is harder. [You have to] try to keep growing and improving, because you can’t just stay the same. The league catches up to you; players catch up to you. So it takes a lot of work to maximize and optimize. You have to keep up or you fall behind.

Q: Once you’re finished at MIT Sloan, what are the next steps for you?

A: I’m currently — and I plan to stay — an advisor to Boston Biomotion and help them develop and market their Proteus system. I believe in the technology; athletes love using it; I love using it and training on it. That’s something I’ll continue to do. But I also intend to develop a very close association with the Major League Baseball Players Association [MLBPA], which is our union. When I graduate from the [Sloan Fellows] program, I plan on setting up shop in New York and working with them on their business affairs, collective bargaining, all sorts of things related to players, including player educational opportunities — we have a nonprofit called the Players Trust. I’m looking forward to … working in the game on the union side.

Q: How did that come about? Is it because you were a team representative [for the players’ union] during your career?

A: As a young player in the majors, if you have a college degree, a lot of times the older guys will say, “You’re going to go to these meetings. You’re going to learn about the issues in the game and come back and report to us.” So that’s what I did, and I have really enjoyed that as sort of a second education throughout my baseball career.

Q: That’s maybe better than other kinds of hazing rituals for young players.

A: Oh, there were others.

Q: How conscious are you and other baseball players of the union’s past? It’s shaped a lot of baseball history and the structure of modern professional sports.

A: In baseball we do a very good job of connecting the fraternity across generations. Guys are very much aware of the players in the late 1960s and the 1970s like [former player] Curt Flood, of the leadership of [former union leader] Marvin Miller, and the sacrifices the guys made to leave us with this game, this industry that we inherited. Guys definitely have a lot of respect for the generation that came before and have a good grasp of the history of labor relations. … That connection with the past is not only informative and helps you make decisions, but it’s important from a cultural standpoint. Some of the things we think about here at Sloan, when we talk about organizations, are [precisely] about organizational identity and culture, and how you [sustain] that.

Q: Your panel today talked a lot about keeping new forms of medical data private. What are your thoughts about that?

A: These are things the union thinks about a lot. I have an interesting perspective because I’m [familiar with] both sides of the issue. As a former player I worry a lot about safeguarding the data. At the same time I know how valuable the data can be, in terms of predicting and preventing injury … as I talked about in the panel, becoming your own innovation lab, if you will. So I’m coming at it from that standpoint, but I’m also coming at it from the labor standpoint. I want to protect the players, make sure there’s no misuse of the data.

The data has value. There’s no doubt. It has value from a player development perpective, from an evaluation perspective, from a commercial perspective. It’s here, it’s coming, and there’s no stopping it; it’s just too valuable. But the instututions need to be strong, the agreements [over its use] need to be strong, and it’s just something we have to keep working through for quite a long time.