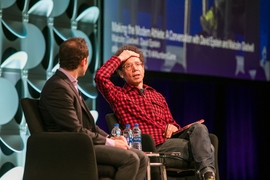 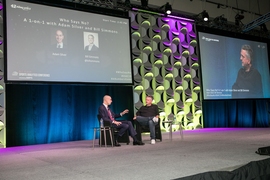 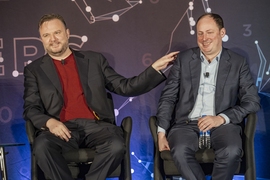 NBA Commissioner Adam Silver listened to a question on stage Friday at the MIT Sloan Sports Analytics Conference, paused for a moment, and delivered a surprising assessment about some of his league’s star players.

“When I meet with them, what strikes me is that they’re truly unhappy,” Silver said. “This is not some, you know, show they’re putting on for the media.”

Without naming names, Silver went on to say that top professional basketball players were often “amazingly isolated” today, party because “they’re a product of social media” rather than old-fashioned team-building exercises.

Moreover, Silver added, players were being boxed into a quasiprofessional existence at young ages, given the presence of AAU teams, national camps, and recruiting ratings for young teenagers, along with a large social media spotlight for star college players.

“There’s never a period when you were nobody,” Silver said. “Especially the lottery-type picks” — that is, players eventually taken high in the NBA draft. When it comes to those players, Silver said, the major shoe companies “know that cohort when they’re 13.”

Those factors might explain why the NBA seems to have a large group of restless star players on its hands, several of whom seem to be publicly looking to switch teams soon. But Silver emphasized that the trends affecting the mental well-being of its players are hardly separate from what we see throughout society.

“I think we live in an age of anxiety,” Silver said.

Which might not seem to have a lot to do with sports analytics. Yet Silver’s comments do show how much MIT’s annual event has grown. The MIT Sloan Sports Analytics Conference — SSAC for short — now functions as a showcase where leading figures examine the general condition of sports in general.

In some instances, the conference has started addressing social issues tangential to sports, but of interest to sports figures. This year SSAC also had a panel featuring rapper Meek Mill and Philadelphia 76ers co-owner Michael Rubin, who are among the principals in the REFORM Alliance, a group trying to change criminal sentencing laws. As Meek Mill said, the group aims to give more people “a shot at life” through sentencing reform.

To be sure, the bulk of SSAC features traditional discussions of sports analytics, which remain highly popular. This year’s 13th edition of the conference featured over 3,500 attendees from 33 countries, 44 U.S. states, 130 professional teams, and over 200 universities. There were 33 panel discussions, 36 “Competitive Advantage” talks, six workshops, a hackathon, and a research paper competition, all in Boston’s Hynes Convention Center on March 1 and 2.

The sheer scope of the conferences also generated convergent discussions, even if they weren’t entirely planned that way. Take the idea that we produce stars by having them specialize in one sport early on — or that we can identify future NBA stars at age 13.

“The earlier you push specialization, the more likely it is you put the wrong person into the wrong discipline,” said David Epstein, science writer and author of the new book “Range: Why Generalists Triumph in a Specialized World,” which draws upon research studies to argue that sports specialization is wildly counterproductive.  And that’s even on its own narrow terms; the best athletes can emerge much later than people realize.

Instead, said Epstein — in an onstage conversation with popular writer Malcolm Gladwell — we should be encouraging kids to enjoy a broad-based “physical literacy” that emerges out of playing many sports, along with other pursuits.

“We basically burn out a lot of people with suboptimal development,” said Epstein, adding that in youth sports, “The systems are setting you up to force you to specialize even if it’s not best for you.”

At times, Epstein notes, this reaches absurd levels, such as the sign he saw in Brooklyn for an under-age 6 travel soccer team — which exists because “it’s so hard to find good competition for 5-year-olds in a city of 9 million people,” he added facetiously.

“I have a rule about travel sports,” Gladwell added, “which is, you should never travel for an amount of time longer than it takes to play the game.”

Moreover, Gladwell added, “We have all been infected by this pernicious notion that the only way to get better at X is to specialize in X.” Admittedly, some people might have come away with that impression after reading Gladwell’s 2008 book, “Outliers,” which suggests that excellence in a discipline may require roughly 10,000 hours of practicing it.

But on the stage Saturday — and in a conversation meant to update a debate the same two authors had at SSAC five years ago — Gladwell said he had been persuaded by much of the evidence Epstein had marshalled in favor of playing sports broadly to achieve later excellence in one sport.

“A large amount of hours [to achieve excellence] is true, but I thought that meant specialization, which is false,” Gladwell said to Epstein. “Thank you — you’ve made me smarter.”

Indeed, this year’s SSAC seemed to attract a significant proportion of freewheeling panelists, as well as athletes ready to question some basic practices in sports. Take ice hockey, where new player-tracking data is being made available for all NHL teams — but has yet to spread across gender lines, suggested Meghan Duggan, a standout forward and three-time Olympic medalist on the U.S. women’s national hockey team.

“Having more access, definitely on the women’s side, [so] you can get to the numbers and the data quickly, would make a huge difference, in terms of prepration for the games,” Duggan said.

“I get endlessly just frustrated watching soccer,” said Morey. Too many teams, he suggested, prize nonthreatening possession of the ball, rather than counterattacking into space.

A fair amount of data backs that idea up, as the panelists noted. But, as Morey noted, “Until [teams] have very, very senior buy-in [to analytics] with money behind it, it’s sad to say, you almost don’t have anything” going.

However, the data do not really back up another Morey complaint, that teams should avoid passing the ball back to the goalkeeper. In that case, Knutson explained, this move helps teams switch the attacks to the opposite side of the field, and, the numbers show, slightly increases opportunities to score.

SSAC closed with another one-on-one conversation, between author Michael Lewis and Washington State University football coach Mike Leach, whose spread-out, pass-heavy “Air Raid” offenses have been producing winning teams for decades, but whose ideas are only now seeping into the NFL.

Leach said he has long been told his offensive system would not translate to professional football. However, he said, “If you can do it in high school, with rare exception, you can do it anywhere else.” The negativity of traditional-minded sports people toward innovators, he added, is something people in sports analytics should just shrug off.

“It’s all just narrow-minded bunk from people who are all just too selfish or lazy to think about it,” Leach said.