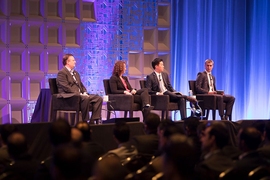 ↓ Download Image
Caption: MIT Sloan Sports Analytics Conference co-founders (far left) Daryl Morey, general manager of the Houston Rockets, and (next to him) Jessica Gelman, CEO of the Kraft Analytics Group, on stage at this year's edition of the event in Boston, on Feb. 23.
Credits: Courtesy the MIT Sloan School of Management 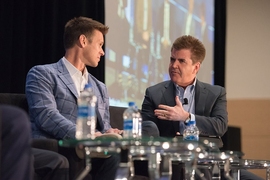 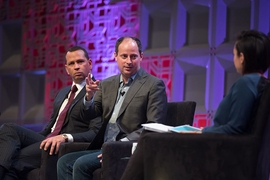 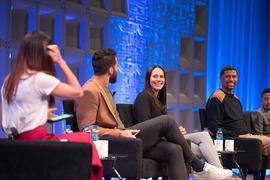 Caption:
MIT Sloan Sports Analytics Conference co-founders (far left) Daryl Morey, general manager of the Houston Rockets, and (next to him) Jessica Gelman, CEO of the Kraft Analytics Group, on stage at this year's edition of the event in Boston, on Feb. 23.
Credits:
Courtesy the MIT Sloan School of Management

At the Super Bowl this February, the Philadelphia Eagles pulled off the game’s signature play: a touchdown pass off a reverse, with tight end Trey Burton throwing to quarterback Nick Foles. That play, which helped upset the New England Patriots, is called the “Philly Special.” And from a sports-analytics viewpoint, the play was special, all right — because it came on a fourth-down situation.

For years, data-driven football analysts have been saying that on fourth downs, teams should go for first downs (or touchdowns) more frequently than they typically do, rather than punting or kicking field goals. This season, the Eagles tried to convert fourth downs more than any team since the 2008 Patriots — and it paid off. Indeed, Eagles coach Doug Pedersen had an extra assistant coach talking into his headset during games all year, just to inform those kinds of decisions.

The Eagles’ real-time sideline discussions fit nicely with the content of 12th annual MIT Sloan Sports Analytics Conference (SSAC), held Feb. 23-24; the conference’s theme, “Talk Data to Me,” and many of its panels, underscored the importance of communication in sports analytics.

After all, since pioneering analyst Bill James’ popular annual “Baseball Abstract” books began mainstream publication in 1982, some fans have known that a lot of conventional wisdom in sports does not add up. But communicating that to executives, coaches, and players has never been easy. Still, this year SSAC was brimming with speakers, many with championship resumes, attesting to the progress in the field.

“We try to be data-driven and model-driven, but when we get that data, we try to talk about it as a group,” said Brandon Taubman, the senior director of baseball operations and analytics at the 2017 World Series-winning Houston Astros, speaking at a panel on baseball data.

“You have to listen,” said Nick Caserio, director of player personnel for the Patriots, at a football panel. “It’s not about where [an] idea comes from or how it gets to you. If it’s a good idea, it’s good.”

“Our culture is one of information,” offered John Chayka, general manager of the Arizona Coyotes of the National Hockey League, at a panel on hockey analytics.

President in the house

First held in 2007, the SSAC was founded by Daryl Morey SM ’05, general manager of the Houston Rockets (who currently have the best record in the NBA), and Jessica Gelman, CEO of the Kraft Analytics Group

This year’s edition, held at the Boston Convention and Exhibition Center, was the biggest ever, with 3,500 attendees from 35 countries and 46 U.S. states, representing over 200 universities and roughly 600 companies. The event also featured 37 conference panels, 33 “competitive advantage” talks on research or new products, a research paper competition — and one former U.S. president.

That would be Barack Obama, who spoke on Friday afternoon, in an hour-long on-stage conversation with Morey and Gelman. Obama’s remarks, made before a capacity audience, were off the record.

Obama is well-known as a sports fan, and in keeping with the idea of deploying data whenever possible, Morey and Gelman showed a slide during their Friday morning welcoming remarks underlining his basketball acumen: Obama’s NCAA tournament picks, which he publicly unveiled every year during his presidency, have been more accurate than those of Morey and Gelman.

Why players want data: “It justifies the hard work”

The classic sports communication problem about data has involved scouts, on the one hand, who evaluate players in person, and analysts, on the other, who look at large data sets to avoid observational biases. But a lot of team executives say that linking the two groups is a common practice now.

“It’s incredibly different,” said Jerry DiPoto, general manager of baseball’s Seattle Mariners, speaking of the evolving relationship between old baseball hands and front-office number crunchers. “Ten years ago they would just sit across the table and throw fruit at each other. … Now it is a bigger and more inclusive group.”

In some ways, sharing data with players can be trickier, since it involves condensing statistics down to a few useful data points, and not forcing players to rethink their well-honed instincts. But sometimes the best players want the most data — like hockey superstar Sidney Crosby of the two-time defending NHL champion Pittsburgh Penguins.

“Sid right now is at another level in terms of the information he wants to get,” said former Penguins coach Dan Bylsma, who steered the team to the 2009 Stanley Cup trophy. Crosby, added Bylsma, would even look at video in between periods of games to analyze how his possessions unfolded.

“But not every player is like that,” Bylsma added.

Chris Bosh, a former NBA all-star who appeared on multiple SSAC panels, won two titles with the analytically minded Miami Heat. Even so, Bosh said, he would have preferred being given more defensive data by his coaches.

One reason the use of analytics in sports may be getting easier is the growing realization that new statistics reinforce traditional values. In basketball, many old-school coaches emphasized winning through defense, rebounding, avoiding turnovers, and having good shot-selection on offense.

Modern basketball analytics puts a premium on those concepts as well, since they all help a team take more high-percentage shots than its opponent, and thus tilt the odds of victory in its favor.

What has changed is the contemporary conception of what a good shot is, and how to obtain it. Teams in the NBA take far more three-point shots than ever now, and space players on the floor more intentionally in an effort to create more space for shooters.

As the star point guard of highly influential Phoenix Suns for several years starting in the 2004-2005 season, Steve Nash helped create this change as much as anyone. Nash won two MVP awards as the Suns increased the tempo, stretched the court, and created a new template for offense. But did this style develop with numbers in mind? Not exactly, said Nash on Saturday, in his first SSAC appearance.

“A lot of what happened in Phoenix was pretty organic,” Nash said, adding that the team’s style started to crystallize during pickup games the players held in the fall of 2004. “It wasn’t necessarily predetermined.”

But it was, organically, a high-percentage style, something Nash’s coach at the time, Mike D’Antoni — now coach of Morey’s Rockets — quickly realized.

“I think a lot of coaches would have found a way to stop that [style] and find validation in organizing something that didn’t need to be organized,” Nash added.

So for all the talk at SSAC about getting players and old-school coaches on board with new thinking, Nash’s example provides a valuable additional lesson: Everyone needs to be open-minded about the unpredictable evolution of sports. That may be something to talk about at next year’s SSAC.

The Sloan Sports Analytics Conference has expanded to show interest in virtual reality, machine learning, and artificial learning, reports Alex Speier of The Boston Globe. The work highlighted at the conference “is in some ways breathtaking, with sports understood in ways that seemed unimaginable at the start of the century,” writes Speier.