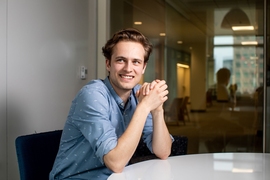 On a sunny May day, Pierre-Luc Vautrey sits in 1369 Coffeehouse in Cambridge, talking enthusiastically about his work — five research projects to be exact. He speaks quickly, and the coffee gives him an extra boost. He has a lot of ground to cover, and at times he has to re-explain certain areas of his research. Luckily, he’s patient and wants to ensure that people understand his work.

Vautrey is a third-year doctoral student in MIT’s Department of Economics. While he spent his undergraduate years studying applied math and physics in his home country of France, he was always drawn to the humanities and social sciences.

As a behavioral economist, Vautrey aims to extend our understanding of economic decisions using psychology. This approach questions traditional assumptions, ever so slightly, in order to make outcomes more realistic regarding human behavior.

“Traditional economics has been modeling everything as rational. We assume that the agent learns like a statistician and makes rational decisions. And in the last 20 or 30 years, this model has shown its limits. It’s still very popular for many things, but for others we can do a lot better at explaining people’s behavior and why certain social systems work and some systems don’t work, by using psychology [to understand] how people actually think and make decisions,” he says.

The unifying theme throughout his current work is understanding how people form beliefs and expectations.

“You can use psychology to take a small departure, that’s the key, from rational behavior, which is having correct expectations and basing decisions on these expectations,” he says. “You still make decisions based on expectations, but you have incorrect beliefs for various psychological reasons. That’s kind of the key psychological, irrational approach that I’m interested in. What is the role of beliefs, how do we best measure them, and in various contexts can we explain why people have irrational beliefs? Can we predict incorrect beliefs of people based on context? Does it help us explain sometimes puzzling decisions?”

One of the projects Vautrey is working on, along with Professor Frank Schilbach from the Department of Economics, is how mental health affects beliefs and economic decision making. They began conducting research in India among people with depression in low-income communities with no access to mental health services. They want to evaluate whether depression affects a person’s self-confidence and, consequently, their ability to participate in their economy. They are working with Sangath, an NGO providing low-cost psychotherapy to the study’s participants, to measure the effects of psychotherapy on not only mental health, but also economic decisions. Vautrey began working on the project the fall of 2017, during its early brainstorming stages, and has visited India twice since the field work began.

“You have to go there to see how operations are going, see the actual participants, because it's really hard to get everything from calls. You have people implementing the project, but usually the people who have designed the questions or are initiating the idea are not full-time in the field because they are professors so they have to teach,” Vautrey explains.

Field visits are also important in order to see whether the research objective and the information gathered are consistent with each other.

“You have to design questions that are qualitative, that are verbal, but are going to generate numerical outcomes that you can analyze. It’s a back-and-forth between sociological-style research, when you talk to people and try to understand what they think, and how you go from there to build quantitative measures. You have to be on the field; you have to be face-to-face to understand whether your numeric outcome is consistent with what you want it to mean,” he says.

Traveling is important to executing research, and Vautrey enjoys that aspect of the job. He has loved traveling since his youth and has taken as many opportunities as he could to do so.

Beyond the project in India, Vautrey is working on a few other projects, two more in progress and two in their preliminary stages. In the former two, he is studying how people choose biased information sources and how people are influenced by news repetition. In another project with MIT economics doctoral student Charlie Rafkin, Vautrey is investigating unsafe driving patterns in developing countries and how drivers’ motivated reasoning about road safety leads to more risk taking that could be easily avoided by correcting drivers’ beliefs and overconfidence.

Vautrey’s newest endeavor is taking him to Colombia with Pedro Bessone Tepedino, another MIT economics doctoral student, for preliminary research for a new project centered around crime and teenage involvement in gangs.

While he enjoys doing all of his research, Vautrey finds that the work can make life a bit unstructured at times. He grounds himself by staying active with activities such as biking and rock climbing.

In the future, Vautrey hopes to work in academia. As a professor, he isn’t sure what specifically he wants to specialize in quite yet, but he says that it will likely have something to do with using psychology and economics to answer specific questions linked to poverty and development. He found a love for teaching through his work as a teaching assistant at MIT this past semester. It requires patience, but Vautrey finds the work rewarding.

Risk, failure, and living your life: The economics of being an early-career scientist

Fighting toxic stress in children is tough but possible