Risk, failure, and living your life: The economics of being an early-career scientist 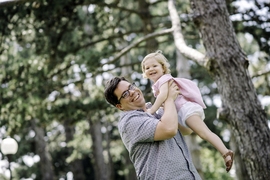 ↓ Download Image
Caption: Economics PhD student Ryan Hill, shown with daughter Norah, studies the role of risk in science. “There are a lot of projects that fail,” he notes. “And that’s a fundamental part of innovation.”
Credits: Image: Ian MacLellan 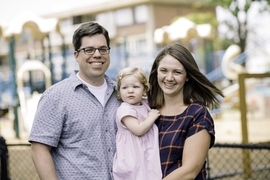 Caption:
Economics PhD student Ryan Hill, shown with daughter Norah, studies the role of risk in science. “There are a lot of projects that fail,” he notes. “And that’s a fundamental part of innovation.”
Credits:
Image: Ian MacLellan

At the end of each weekday, doctoral student Ryan Hill travels from his office in the MIT Department of Economics to his residence at the west end of campus. There, he joins his wife, Sarah, and their two-year-old daughter, Norah, for dinner. After dinner, Hill spends an hour or two playing with Norah before putting her to bed.

“I think most people would agree that research can consume your mind. Even when you walk out of the lab, you’re still thinking about it,” Hill says. “It’s been really nice to go home and forget all of that for a while and play with my daughter. … It’s a nice change of pace.”

Often, once Norah’s in bed, Hill returns to the department building located on MIT’s East Campus to resume his research, on the role science plays in innovation. His research and studies are supported by a National Science Foundation Graduate Research Fellowship grant he received after studying economics and mathematics at Brigham Young University in Provo, Utah.

“Science is an important part of innovation — it’s very early in the process,” Hill says. “My research is empirical, so I use data to try to learn how science works.” Part of that learning process places Hill at his laptop, analyzing “outputs” of research such as publications or citations. But outputs alone don’t tell the whole story: He also focuses on “inputs” of research, like how projects are chosen for research in the first place.

Hill has also forged connections with other MIT graduate students who have families, and he has spoken out about issues — arising at MIT and in Washington — that impact this community. “I’m one of many that are involved in these efforts, but when I get the chance I try to represent and communicate the needs of student families at MIT,” he says.

The role of risk

Most recently, Hill has been analyzing risk — specifically, the risk of failed research projects. “Scientists work on a lot of different projects all the time. Once in a while, they turn into a useful innovation and a paper. But there are a lot of projects that fail,” Hill says. “And that’s a fundamental part of innovation.”

Hill cites the law of large numbers, a theorem in probability theory that describes the results of experiments repeated over and over. “If enough people are working on science, we’ll get a steady stream of useful innovations. But at an individual level, research involves a lot of risk.” Hill points to graduate students as examples of scientists who take on risks in research. At MIT, graduate students often focus on a handful of projects. “And so the question is, at the project level, whether they’re facing a risk of failure that could affect the outcomes in their career. … It might affect the projects they choose to work on and whether they should be doing something that’s very risky or not.”

For one of his thesis chapters, Hill worked with data from Chile’s Very Large Telescope. Performing research at the telescope is an exercise in risk. Hill says scientists apply to reserve time on the telescope six months in advance for one or two nights. If they’re lucky and get accepted, scientists fly to Chile prepared to look through the scope. But there’s a catch.

“There’s a lot of variation,” Hill says. “Some people fly all the way down and it’s cloudy for the whole night.”

“It does affect people, at least for a while,” Hill says. “In most cases, at least in astronomy, people do have chances to catch up [professionally]. If you have a project failure, it doesn’t seem like you’re hurt forever. Many researchers are able to come back and do other projects, but it might take a few years.”

During Hill’s third year, he excitedly began to gather research for a different study of innovation. He recalls that even his advisor, Heidi Williams, associate professor of economics, encouraged him in this direction.

About a month into Hill’s dive into his research, Williams sent him an email with a subject line along the lines of “Was this the paper you wanted to write?”

“It was literally a paper on the same topic, same area,” Hill says with a laugh. “Even table-for-table, it was exactly what I had planned to do.” Once he was scooped, Hill did what most researchers do: “I abandoned it.”

Now, Hill studies the “scooped” phenomenon. “It’s fundamental to science. Whenever I talk to people about it, it’s often the same reaction — ‘Oh! This happens to me!’”

Hill hopes that by looking at the data behind scoops, he’ll be able to determine whether getting scooped is “as big of a deal as we think.”

In 2017, MIT’s Graduate Student Council invited Hill to visit Washington to discuss with members of Congress the impacts of a proposed tax bill that would make tuition waivers taxable.

“I was happy to volunteer my efforts and talk about why that’s bad — especially toward families,” Hill says. “I have a young daughter, and [the proposed legislation] affects families in particular. There are already a lot of financial barriers for students.”

To discuss the potential impacts, Hill wrote an op-ed for the Deseret News of Salt Lake City. In the op-ed, Hill argued that the taxation of tuition waivers would stifle scientific research by placing undue burdens on students. “Students are the engine that makes science happen at MIT,” Hill says.

In his op-ed article and in other interviews with the media, Hill explained that he and his wife rely on his graduate stipend plus her part-time job as a photographer to pay all their expenses. Now that they have Norah, they aren’t breaking even.

Indeed, for many MIT graduate students with families, the expense and limited availability of high-quality childcare can be yet another burden to contend with, and Hill says he has advocated alongside peers who explain the situation is even more tenuous when full-day childcare expenses are necessary.

After the bill passed without the provision to tax tuition waivers, Hill had a chance to reflect on his work.  “You don’t often get a chance to take your research and talk to policy makers,” Hill says. “Most people don’t get Science or Nature or other academic journals in their mailboxes. So we need to communicate our research to the world.”

Hill has also advocated for the student family community at MIT, participating in meetings, focus groups, and other efforts related to health care coverage, family housing, and affordable parking. “I think the Institute is slowly improving their support of student families, such as recently standardizing the parental leave policies, but there is more work to be done,” he says.

In the future, Hill hopes to become an economics professor and to continue to pursue research: “There’s a lot of different ways in economics that we can try to help improve policies and institutions around the world.”

To Hill, his time at MIT “feels like a big blessing.”

"One thing I've learned is that there's always going to be a better time to start — you know, to get married or start having kids or to do whatever your other personal life goals are,” he says. “PhDs are so long, you have to learn how to live your life. It may seem a little inconvenient [to raise a family during graduate school], but it's been awesome for us.”