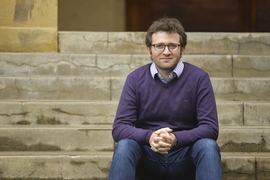 Take a moment to consider what the following facts have in common. In India, migrants from within the country continue to consume the favored foods of their home regions — even though the relatively high prices mean they eat less. In Mexico, more 9th graders drop out of school when a local manufacturing plant opens to export goods. And in Egypt, rug weavers earn 20 percent more in profits when orders come from foreign buyers. Three countries, three quite different issues. What are the links?

First, these circumstances have all been created, one way or another, by economic trade. And second, these facts were all uncovered by MIT economist David Atkin, a scholar whose empirical, tightly focused studies of trade and development have helped experts better understand trade’s effects.

With this work, Atkin plays a valuable role in the world of trade policy. Global trade agreements have powerful backers and staunch opponents. What the subject could use, really, is a few more observers who simply study its effects in close detail. Furthermore, in academia, trade scholarship has often been heavy on theory and large-scale metrics, and much lighter on localized studies that tell us something about daily life.

“I focus on situations where we can learn something we can be more sure about,” Atkin says. “Typically that means focusing on more specific cases.” Or, as he adds, his work explores “settings where you can really dive in deep” in order to “pin down causal relationships” in society.

Take our three facts. As Atkin documented in meticulous studies, trade liberalization among regions within India may not quite have the textbook results policymakers might anticipate. Because people have persistent food tastes and prefer the cuisines of their home regions, migrants pay more for imported home-area foods. (Atkin has found they endure a “caloric tax” of 5 to 7 percent of their daily intake.) Therefore the potential economic gains people might realize from the increased trade of food will be limited due to the powerful cultural persistence of dietary habits.

Meanwhile, in Mexico, Atkin found, for every 25 new export manufacturing jobs in a given location, one 9th grader dropped out of school. In so doing, the children were opting to earn money in the factory in the short run but not helping their earnings over the long term. That’s a questionable trade-off — and a trade issue, too. The North American Free Trade Agreement (NAFTA) opened up Mexico to more export manufacturing (which often requires less education), but having a less-educated work force was an unintended consequence.

The weavers in Egypt who earned more for their goods participated in an experiment set up by Atkin and some colleagues, which showed that their productivity and profits surged “due to information about specific weaving techniques and quality standards that flowed from overseas buyers to firms,” as he has written. Global trade, in this case, provided technical information that helped manufacturers in poorer settings.

“Understanding the impact trade reforms might have on nutrition or on educational choices will hopefully help policymakers incorporate those concerns into their discussions, and help put policies in place that will ameliorate those concerns,” Atkin says.

Getting on the train

Atkin, who grew up in London, claims he has “no great origin story” concerning his interest in economics and trade, but says it was present from his school days onward and enhanced by some of his travels abroad while growing up.

“I was always extremely interested in why things were different in different countries, why poor countries were poor, why rich countries were rich, and how markets or institutions worked differently wherever I would go,” Atkin says.

Atkin attended Cambridge University, where he studied economics at St. John’s College, earning his degree in 2002. “I did economics as an undergraduate and didn’t get off the train,” Atkin says.

Atkin had something of a whistle stop at the London School of Economics, where he earned a master’s degree in a year; he then had a longer layover at Princeton University, where he received his PhD in 2009. He held junior faculty positions at Yale University and then the University of California at Los Angeles before joining MIT in 2015. Atkin was granted tenure at MIT in 2017.

As Atkin’s career has progressed, he has also constructed a variety of studies slightly more focused on development issues in poorer countries, apart from trade. For instance: About 40 percent of the world’s soccer balls are manufactured in Sialkot, a city in Pakistan. To see if the industry could be made more productive, Atkin and some colleagues actually created an improved, faster technology for soccer ball manufacture — only to watch as just a small fraction of the city’s firms adopted it.

Why was it not adopted more widely? Because of how the workers were paid, the researchers realized. One firm that quickly adopted the new technology paid workers by the hour, but most of the rest paid workers by the ball — and the workers did not want to take the time to learn the new procedure, which would have slowed down their production rates.

The junction of trade and development

Whether studying trade, development, or the combination of the two, Atkin says he is most comfortable examining how poorer parts of developing countries can be affected by new economic activity.

“There [is] a lot of important work that needs to be done on the intersection between trade and development, thinking about trade from the perspective of developing countries,” Atkin says. “I’ve thought that is where I should devote my energies.”

At MIT, he has a lot of intellectual company in these areas. The Institute has become a renowned center for development economics and is the home of the Abdul Latif Jameel Poverty Action Lab (J-PAL), co-founded in part by MIT professors Esther Duflo and Abhijit Banerjee.

In addition to being affiliated with J-PAL, Atkin is part of a burgeoning group of trade scholars in the MIT Department of Economics. That includes Arnaud Costinot, an MIT economist since 2008, and David Donaldson, a co-author of papers with Atkin who also works on trade and development issues and is rejoining the MIT faculty. (MIT labor economist David Autor, who has studied the effects of trade agreements on U.S. jobs, is also among current Institute faculty who has closely researched trade issues.)

Atkin says he hopes that with its growing critical mass of trade experts, MIT will again become recognized as a key hub of research and teaching on the interaction of trade and development.

“It’s wonderful, with all of the expertise MIT has in development, to be able to marry that with a very strong trade group with Arnaud and Dave,” Atkin says. “It’s just a wonderful place to be thinking about these issues.”

Grow your own way