Grow your own way 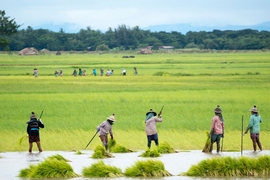 ↓ Download Image
Caption: A group of Burmese woman grow rice on a rice paddy. A new study indicates that agriculture in Mynamar and other countries will experience substantial productivity declines in the next 30 years due to climate change.

Caption:
A group of Burmese woman grow rice on a rice paddy. A new study indicates that agriculture in Mynamar and other countries will experience substantial productivity declines in the next 30 years due to climate change.

Warming temperatures will take a heavy toll on agricultural productivity, according to climate scientists. How will society adjust? One possibility might be increased trade: If one country suffers a decline in, say, wheat production but can still grow as much rice as ever, then — in theory — it might grow more rice and trade for its usual amount of wheat instead.

But a new study co-authored by an MIT economist suggests that international trade will do little to alleviate climate-induced farming problems. Instead, the report indicates that countries will have to alter their own patterns of crop production to lessen farming problems — and even then, there will be significant net losses in production under the basic scenarios projected by climate scientists.

“The key is the response within a country, in terms of what those farmers produce, rather than between countries,” says Arnaud Costinot, a professor in the Department of Economics at MIT and expert on international trade issues, who is one of the authors of a paper detailing the study’s results.

To be sure, the study concludes that the overall impact of climate change on farming is expected to be large: Even with adjustments in both farming practices and trade, farming production would decline by roughly one-sixth, using the baseline scenario for climate change projected by the Intergovernmental Panel on Climate Change (IPCC), and incorporating weather projections over a 30-year period.

The research uses an unusually detailed dataset that divides the Earth’s surface into 1.7 million grid zones and looks at agricultural output within them. It examines 10 crops, including wheat and rice, which represent about 1.8 percent of global GDP. The damage to those crops alone would lower global GDP by about 0.3 percent.

“This is pretty substantial,” Costinot says. He adds that because the 10 crops in the study represent only a portion of global farming, this predicted reduction in their share of global GDP means that when it comes to assessing the damage to agricultural productivity overall, the decrease of one-sixth “is really the right number to have in mind.”

The paper detailing the study has been published in the latest issue of the Journal of Political Economy. The co-authors of the study are Costinot; Dave Donaldson, an economist at Stanford University who helped conduct the research while at MIT; and Cory Smith, a doctoral student in economics at MIT.

The study uses information from the Food and Agriculture Organization (FAO), which compiles a dataset on “Global Agro-Ecological Zones.” The dataset looks at factors such as soil, topography, and elevation, in conjunction with climate conditions.

The researchers then built a model of agricultural production and international trade, involving 50 countries that comprise about 90 percent of the world’s farming output. They applied the model’s results to 11 different climate scenarios described by the IPCC, the UN group that has published a series of consensus climate forecasts.

Crucially, across all 11 of the climate scenarios, the researchers found that internal changes in the types of crops grown were always more important than using global trade as a way of compensating for farming failures.

When farmers in the model were unable to make crop changes, Costinot observes, “Half the value of the output would have been gone, suggesting that that adjustment was pretty important. In contrast, when we turn to the international trade channel, we found something very close to the original effects [of climate change on farming], suggesting that that adjustment is far less important.”

As with many aspects of climate change, the effects on agriculture could vary widely by region and country. In the study’s model — under the baseline IPCC scenario, and given farming and trade adjustments — agricultural productivity declined by over 10 percent in the Democratic Republic of Congo, Ghana, and Myanmar, and a whopping 49 percent in Malawi. In other countries, including Germany and the United States, the expected effects in the model were very modest.

“It’s much, much larger for some countries, including the poorest countries in the world,” Costinot observes.

To be clear, as the researchers note, the study does depend on the consensus forecasts of the IPCC. “We’re being very upfront that we just take that as input,” Costinot says.

Other scholars have found the study interesting and innovative. Samuel Kortum, an economist at Yale University who has studied international trade extensively, believes the results are “pretty convincing” and could be regarded as “surprising” with regard to the lesser role that trade adjustments may play.

“It’s both original, and yet it uses economics in the way you’d like,” Kortum says, observing that the study’s modeling is solid.

Kortum adds that the current study could lead to further work in the field, by researchers examining some of the precise economic adaptations individual countries might have to make in a warming climate.

“One could look at the details of what those shifts are,” Kortum notes.

The study received funding from the National Science Foundation.

Washington Post reporter Jim Tankersley writes about a new MIT study that found trade may not help countries cope with climate-induced agricultural problems. The researchers found countries needed the “ability to substitute new crops for the ones that don’t grow as well under climate change.”