Caption:
Arnaud Costinot
Credits:
Photo: M. Scott Brauer
If you start talking international trade with Arnaud Costinot, chances are he will have an advantage over you. Costinot, an MIT economist who specializes in trade, has an easy command of a large set of facts, models, ideas and outstanding research problems in the field.

But Costinot, it happens, also has an edge over most other trade economists when it comes to one of the most famous ideas in economics: the Theory of Comparative Advantage, formulated by the Scotsman David Ricardo in 1817. 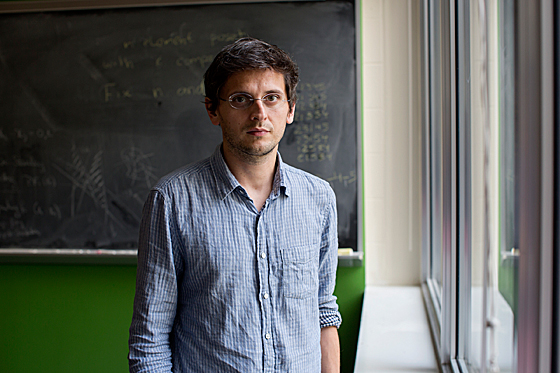 Ricardo thought that instead of trying to produce a wide range of goods, countries could grow by specializing in the goods they could produce most cheaply, and then trading those goods with other countries. This made sense, Ricardo claimed, even when a country could make multiple products more cheaply, in absolute terms, than other countries.

Certainly there are potential complications in such scenarios, such as terms of trade and transportation costs. But the streamlined nature of Ricardo’s model has meant, in Costinot’s view, that too often, “It was really viewed as this pedagogical device for undergraduates and nothing else, because it was just too simple.”

So instead of confining the Theory of Comparative Advantage to the lecture hall and seminar room, Costinot has made it the focus of a series of studies — a large strand of his own body of work. As he puts it, he is frequently “revisiting this idea, extending it, generalizing it, confronting it with the data, and quantifying the importance that it may have for welfare.”

Among other things, Costinot and MIT colleague Dave Donaldson co-authored a paper, published last year, that used agricultural data extracted from 55 countries to show that there is indeed a link between comparative advantage and specialization, something that is hard to demonstrate empirically. Pol Antras, an economist at Harvard University, called it “one of these papers where you think somebody should have done it 50 years ago.”

Costinot grew up in Dunkerque, the French city on the North Sea famed as the site of an enormous evacuation of British troops in 1940. His father was a teacher and his mother is a nurse. They encouraged him to apply to the college-preparatory section of the Louis-le-Grand — the esteemed school in Paris where the likes of Voltaire and Moliere studied. After two years there, Costinot was accepted to the Ecole Polytechnique in Paris, one of France’s elite colleges.

At first, Costinot wanted to study physics or math, but changed his mind after a seminar talk by a French government official who explained “how the French thought about the Euro, German reunification, all sorts of things like that. I thought that was great. These were the kinds of questions that I wanted to understand and shed light on.”

Costinot wound up majoring in applied math, but with a second major in economics. Before long he wound up in Princeton University’s PhD program in economics, where he received his doctorate in four years. After three years on the faculty of the University of California at San Diego, Costinot moved to MIT.

While Costinot may have left Dunkerque long ago, his hometown hasn’t entirely left him. For one thing, he has known his wife, who lives with him and their two children in the Boston area, since they met in Dunkerque, two decades ago.

For another thing, growing up in Dunkerque made a big impression on Costinot — as he watched its shipbuilding business disappear, and its commercial port shrink. The shipbuilding industry lost business to South Korea, and the port lost business to European neighbors such as Rotterdam and Antwerp. It was an early lesson for him in the instabilities, and local effects, of international trade.

“The whole [shipyard] shut down in the 1980s, and the port also shrank dramatically,” Costinot recalls. As a result, he says, “I was perhaps more sensitive than others to those questions.”For this reason, Costinot is frank about the economic effects of international trade.

“Losses from trade tend to be much more concentrated than gains,” he acknowledges. If T-shirts bought by Americans are now made largely in China, he notes, the effects will be felt through income lost in clusters of communities that depended more heavily on the textile industry — even though the net result may be a gain in welfare for the country as a whole, as tens of millions of people save a little on clothing expenses.

Part of Costinot’s long-term research agenda, he says, is to try to measure the gains as accurately as possible.

“If the gains from trade are very small, would you really want to have many distributional consequences?” he asks. “Many people would say no. Trying to get at the quantitative question is also something I feel is important.”

And, he thinks, the nature of global trade today makes it appealing to use the Theory of Comparative Advantage as a building block for study. Back in the Cold War, more trade was between highly developed, economically similar countries such as the United States, Japan and the nations of Western Europe. That may have led economists to seek out other reasons for trade besides the one Ricardo pinpointed. Today — with the growth of China and Latin American economies, among others — many dissimilar countries, with wildly varying institutions, are trading with each other.

“The reason why there is a comeback of Ricardian theory today is, in part, as a response to those trends,” Costinot says. Trade between developed and less-developed economies “is on the rise and it seems to be quite different. We may need new theories, or old theories and their extensions may be better suited to it.”