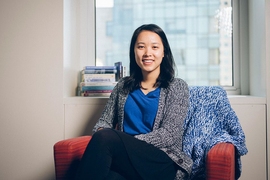 ↓ Download Image
Caption: Next year, Olivia Zhao will attend Oxford University to earn a Master’s degree in economics as a Marshall Scholar. After that, she hopes to earn a PhD in economics and work in a university or at an institution such as the Chicago Federal Reserve, to research public policy from an economics perspective. 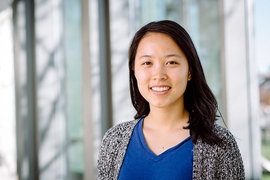 ↓ Download Image
Caption: Next year, Olivia Zhao will attend Oxford University to earn a Master’s degree in economics as a Marshall Scholar. After that, she hopes to earn a PhD in economics and work in a university or at an institution such as the Chicago Federal Reserve, to research public policy from an economics perspective.

Caption:
Next year, Olivia Zhao will attend Oxford University to earn a Master’s degree in economics as a Marshall Scholar. After that, she hopes to earn a PhD in economics and work in a university or at an institution such as the Chicago Federal Reserve, to research public policy from an economics perspective.

Olivia Zhao attends a baseball game at Fenway Park each year and has closely followed each baseball season since her childhood. The MIT senior and economics major says her current penchant for analyzing trends within data originated with her love for America’s pastime.

“Baseball was a way for me to both relax and think about math and data,” Zhao says.

Last summer, Zhao interned at the Federal Reserve Bank of Chicago. When she sent in her resume to apply for the internship, she noted, at the very bottom of the page, that her interests included sports analytics and sabermetrics — the statistical analysis of baseball. That inclusion worked in her favor.

At the Chicago Fed, Zhao was assigned to a project that dealt with her favorite sport. “It was related to economics research, I promise!” she says with a laugh.

As a research intern, Zhao used methodology from the fields of labor economics and econometrics to analyze the incentives that encourage baseball players to take performance enhancing drugs. She found that the incentives had the largest impact at the very highest and lowest levels of the minor leagues — the levels where players can receive drastic increases in pay due to their performance.

For Zhao, there’s always a story in the data, and through her studies at MIT and future graduate studies in economics, she aims to find it.

Next year, Zhao will attend Oxford University to earn a Master’s degree in economics as a Marshall Scholar. After that, she hopes to earn a PhD in economics and work in a university or at an institution such as the Chicago Federal Reserve, to research public policy from an economics perspective.

Zhao wants to “research the policy in action,” she says.

During her internship at the Federal Reserve Bank, Zhao learned how to code for a web scraper, a tool that identifies and collects data from the internet. In research for her senior thesis, which examines Hurricane Harvey’s impact on gas prices, Zhao uses this tool every day.

Using her web scraper, Zhao has collected months of data to track prices as they rose and fell after the hurricane — results, she says, that she will craft into a narrative.

“I have the numbers,” Zhao says, “but the numbers aren’t saying why I think this phenomenon happened.”

Zhao had been planning to do her thesis research on gas prices, so she sprang into action when she heard about Hurricane Harvey. The late-summer hurricane “provided a really cool event to study” and “it all happened in really quick succession,” Zhao says.

“What I’ve found is that even though retail prices spiked all over the U.S. after Harvey, they increased the most in the Gulf Coast region and took until October to return to pre-Harvey levels,” she says. “Furthermore, prices went up much faster than they came down, even after refineries in Texas had reopened. One potential cause of this asymmetry in retail price movements is a particular gas station’s additional amenities — like having a convenience store or restaurant — and their local market power — how many nearby competitors there are.”

In high school, Zhao wasn’t exposed much to the field of economics, but choosing to study it in college was a relatively easy decision. “I’m good at math and I really like social studies, and I figured economics was the best combination of the two,” she recalls.

After she was accepted into MIT, Zhao participated in the Campus Preview Weekend, an event that invites admitted students to visit campus during a period of 3.14159 days each spring. Zhao was initially concerned that MIT’s strong tradition in STEM would overshadow the economics she hoped to study, but she soon had a revelation.

“I realized that being surrounded by this kind of STEM environment [at MIT] was actually a really cool shift in perspective for me,” Zhao says. When she met with other students, she noticed that students from many different backgrounds shared the same sense of passion for their areas of study that she had for economics. After a visit to the economics department, Zhao was ready to step up to the plate.

Economics as a mindset

Zhao became actively involved in the Departmet of Economics and joined the MIT Undergraduate Economics Association, where she worked to plan events that would pique the interests of current economics students but also students in other academic fields.

As officer of the student group, Zhao helps plan lunch talks in which professors and groups of 10 to 15 students “talk shop about economics” and discuss how “economics is rooted in really interesting questions.”

“Our research has potential impacts on topics that are really accessible to people,” Zhao says. The lunch events help students learn how to “show people outside the department that economics offers one way to think about the current events around us.”

Though economics is one of the most popular concentrations in the School of Humanities, Arts, and Social Sciences, the small size of the department enables collaboration and research opportunities for students, according to Zhao.

Zhao also took two classes on public policy that led her to minor in that subject. This work dovetailed nicely with her economics major: “The best way for me to stay engaged with these issues,” such as education policy or public housing policy as covered in her political science courses, she says, “was academic research in economics.”

In addition to pursuing economics research and following baseball, Zhao participates in the MIT Academic Teaching Initiative, a program that provides low-cost college preparation covering the SAT and AP curricula. The program is attended by around 600 students a year.

Zhao taught math during the fall of her first year but soon worked her way up in the organization’s leadership. Eventually, she became the director of the program, during her sophomore and junior years. Zhao aimed to change how the initiative approached teaching, and critically evaluated what students needed from their experience.

“It used to be just classes, and we decided that we wanted to focus more on outreach,” Zhao says.

For Zhao, that outreach included hosting a panel that demystified college admissions for Cambridge and Boston area students.

“If your parents didn’t go to college in the U.S. or you’re a first-generation college student,” she says, “the college admissions process is really confusing and complicated.”

She feels that by teaching and helping others on their path to higher education she is “paying it forward.”

“I’m really grateful that during my time at MIT, I have been able to connect personal experiences through the [Priscilla King Gray] Public Service Center to experiences in the classroom and future opportunites,” Zhao says. “I’ve been able to see how all those three are connected. In my career, I can study issues from an academic perspective that I find really compelling because they are personal issues to me now.”

Coming together for a day of service and activism