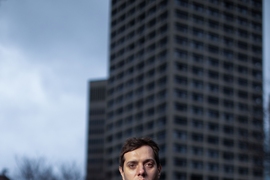 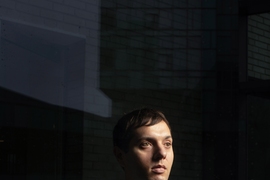 Alexander Wolitzky leans back in his office chair, pauses, and starts to describe “Cycles of Conflict: An Economic Model,” a journal article he co-authored.

“There’s a simple idea in that paper,” Wolitzky offers, describing its thesis: While conditions of mistrust can lead to political violence, they may also change as antagonists better understand their opponents, leading to an eventual reduction of hostilities.

Wolitzky’s work is a blend of streamlined concepts like this and complex social phenomena. A professor in MIT’s Department of Economics, he deploys game theory — the formal study of strategic decision-making — to illuminate observed behavior across a range of political and social institutions. Almost no topic is off limits: Wolitzky builds models concerning war and international affairs, labor relations, networks, technology adoption, and more.

“We have the view that economic institutions, the way governments are set up, norms, laws, are all very important for economic development, for growth,” Wolitzky says. “But they can be vague concepts: What do these things mean?” His work digs into the mechanisms underlying those concepts.

Take “Cycles of Conflict,” which appeared in the American Economic Review in 2014, co-authored with colleague Daron Acemoglu. As the paper notes, analysts have observed that misperception and distrust have led to violence and warfare in many geopolitical situations — Uganda, Kenya, Northern Ireland, the Balkans, and more. Indeed, as Acemoglu and Wolitzky point out, it was also the explanation Thucydides offered for the origins of the Peloponnesian War.

In any case, fears of inevitable conflict can lead to pre-emptive warfare. But how do such situations de-escalate? In an original contribution, the MIT authors model how a spiral of aggression unwinds — because one side or both will learn that the aggression was unnecessary, a dynamic observers have used to describe events in Colombia, among other once-troubled places.

These types of coherent models can play an important role in the intellectual ecosystem by organizing and illuminating messy sets of  empirical data. And Wolitzky is determined to model large-scale events, not just micro-level individual decisions.

“I think this department really values people who have some breadth and can talk to people across fields a little bit,” Wolitzky says. For his research and teaching, Wolitzky was recently awarded tenure.

Wolitzky grew up in Madison, New Jersey, and attended Harvard University as an undergraduate, writing a senior thesis about voter behavior.

“From relatively early on I was interested in [the] intersection of game theory and modeling institutions broadly,” Wolitzky says. In MIT he spied a place where he could continue that course of study, so he attended the Institute as a graduate student in economics, working with faculty members Glenn Ellison (his principal advisor), Acemoglu, and Muhamet Yildiz, among others.

Wolitzky zipped through the PhD program in four years. Being a graduate student at MIT only enhanced Wolitzky’s sense that he could try to range broadly across topics.

“One thing I did pick up strongly from Glenn and Daron,” Wolitzky says, “is this sense that — well, a question students sometimes ask is, ‘Should I specialize in the technical aspects of a work, or on doing something conceptually new, or on applied work?’ But these aren’t either/or propositions. Successful research can do something new and also be relevant. That’s a vibe you have here that I think is true, and has definitely had an effect on me, as something I can aspire to.”

After graduating in 2012, Wolitzky joined the faculty at Stanford University as an assistant professor. He stayed in Palo Alto for two years before returning to MIT in 2014 as the Pentti J. K. Kouri Career Development Chair in economics. Wolitzky was promoted to associate professor in 2016 and granted tenure in the spring of 2018.

Wolitzky says the “collegial” atmosphere in the MIT Department of Economics is very important for his work. But some of his key insights are due to quiet reflection.

“The moments when I get the main ideas for my papers are me sitting in my office with a pad of paper and a pen,” says Wolitzky.

Sometimes, Wolitzky develops models that refer to one sphere of life, such as politics, and later realizes that parts of them apply to something else entirely. The “Cycles of Conflict” model fed into a new paper he has authored alone, “Learning from Others’ Outcomes,” forthcoming from the American Economic Review, which is about technology adoption.

“You write down some model to think about conflict, and you realize it’s related to these models used for other purposes, and you have to think about the connection,” Wolitzky says. In this case, the model describes how people will more readily adopt new technologies if they can tangibly observe productive outcomes stemming from them, but are less ready to adopt technologies that merely make the same amount of productivity cheaper.

“They’re both models of dynamic social learning where you don’t fully understand why the other person is doing what they’re doing,” Wolitzky says.

Wolitzky also models and teaches network theory at MIT; a 2013 paper of his, “Cooperation with Network Monitoring,” published in the Review of Economic Studies, originiated in his PhD work. In it, Wolitzky examines the extent to which monitoring people in a network engenders cooperation, as well as the ways in which people central to the network have a contagious effect among others.

Wolitzky also teaches a relatively new course, 14.18 (Mathematical Economic Modeling), that gets undergraduates to learn the craft of modeling and to develop their own projects.

“It’s interesting to see the diversity of things students have ended up working on, as you might imagine,” Wolitzky says. “Different students work on models of strategic communication, or the economics of Bitcoin — it’s been all over the place.”

It sounds familiar. Indeed, encouraging students to pursue their own idiosyncratic projects strikes a chord with Wolitzky — after all, it’s what others have done for him at MIT too.

“The norms here get passed down from generation to generation,” he concludes.

3Q: Daron Acemoglu on technology and the future of work