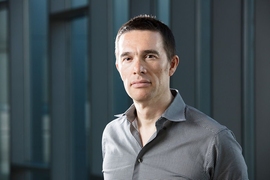 ↓ Download Image
Caption: “Technology has always been one of the motivations of my work,” says Van Reenen, a high-profile economist who joined the MIT faculty in 2016. More specifically, he adds, he likes to explore “how people come up with ideas, and how ideas spread, among firms and across countries.” In short, Van Reenen studies how our modern world keeps modernizing. 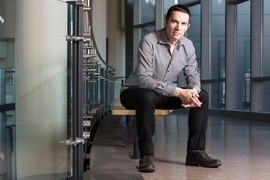 ↓ Download Image
Caption: “Technology has always been one of the motivations of my work,” says Van Reenen, a high-profile economist who joined the MIT faculty in 2016. More specifically, he adds, he likes to explore “how people come up with ideas, and how ideas spread, among firms and across countries.” In short, Van Reenen studies how our modern world keeps modernizing.

Caption:
“Technology has always been one of the motivations of my work,” says Van Reenen, a high-profile economist who joined the MIT faculty in 2016. More specifically, he adds, he likes to explore “how people come up with ideas, and how ideas spread, among firms and across countries.” In short, Van Reenen studies how our modern world keeps modernizing.

Long before John Van Reenen became a professor at MIT, he was studying MIT topics in an MIT style.

“Technology has always been one of the motivations of my work,” says Van Reenen, a high-profile economist who joined the MIT faculty in 2016. More specifically, he adds, he likes to explore “how people come up with ideas, and how ideas spread, among firms and across countries.” In short, Van Reenen studies how our modern world keeps modernizing.

Van Reenen became well-known, however, partly by explaining why people in his native Britain have not come up with ideas, at least not as much as they once did. In research during the 1990s, Van Reenen determined that British firms had lagging R&D investment across most of the country’s industrial sectors. This decline was compounded by a significant withdrawal of government support for R&D in the 1980s.

As a result, Britain had an innovation malaise that was real, but curable. Van Reenen’s prescription: more sensible tax plans to spur R&D investment and fuel the growth that comes from innovation.

“The traditional way we thought about innovation and technology was as if it’s dropped on us, like manna from heaven,” Van Reenen says. However, he adds, “Technology can respond to the social and economic environment. There are policies which can be used to spur the creation of new technologies.”

Creating new technologies is one thing; using them well is another. This, over the last decade, has turned out to be a new vein of Van Reenen research. Along with several colleagues, including his former student, Stanford University economist Nicholas Bloom, Van Reenen has closely scrutinized how firms use innovations, while driving toward a still-larger question: Does management matter?

After empirical studies of management practices covering more than 10,000 firms in 20 countries, scrutinizing how firms set goals, keep track of data, and create incentives, Van Reenen has concluded: Yes, management matters greatly. Unless firms apply innovations shrewdly and use their employees well, the impact of technology turns out to be limited.

“We think about technology in a narrow sense — in terms of the hard technologies, such as computers or robots,” Van Reenen observes. “Whereas in fact the returns on those things vary tremendously, and the key factor is management. You can throw a lot of money at technology and it can all go down the drain. The organizational practices in the firm are absolutely critical to making best use of technology: how you manage your people, hire the right kind of people, motivate them, who gets the power.”

“If anybody can buy a technology off the shelf, then you’re never going to have much of a competitive advantage just by doing that,” Van Reenen says. “For some of these things to be transformative, you have to transform the nature of your organization.”

Encouraged to join in

Van Reenen’s MIT appointment is jointly between the Department of Economics and the MIT Sloan School of Management, where he is the Gordon Y. Billard Professor of Management and Economics. It’s safe to say that his notion that management matters has been broadly noticed in the management world.

There are still other things Van Reenen studies, however. He has worked on health care policy as a British government policy official, examined the effects of automation on workers, and in recent years become a leading public voice about the overall economic impact of Brexit on Britain’s economy.

Van Reenen’s presence in academia and the public sphere is such that he was awarded the Medal of the Order of the British Empire (OBE) in 2016, for services to economics and public policy. (Other recipients that year included four-minute mile pioneer Roger Bannister and musician Ray Davies of The Kinks.)

Van Reenen’s midcareer jump to MIT is notable, then, considering how embedded he was in his home country. Van Reenen grew up in London, where his father was a sociology professor. As Van Reenen notes, he comes from a “long line of teachers.” His grandfather was the headmaster of a school in South Africa, who became a political refugee and settled in Britain. Growing up, visits to his grandparents’ house helped Van Reenen find interest in global affairs.

“I always remember as a kid, every Sunday we’d go round there for dinner or for lunch, and there would always be lots of animated political discussion about world events, and what was happening, and as kids we were always encouraged from an early age to join in,” Van Reenen recalls. “So that was kind of the formation of my interest in thinking about the world.”

It was during this period that Van Reenen took time off from academia and entered government, working on health care policy when Tony Blair was prime minister. The government was then trying to refine the delivery of health care; Van Reenen, by his own account, did not participate in any grand policy shifts but learned a great deal.

“That was a very good experience for me in the sense that I got an appreciation of how difficult it is to persuade people to implement policies,” he says. “You can have the best idea in the world, but in order to convince skeptics you need to spend a lot of time talking to people, presenting the results in the most pithy way. I gained a lot more respect for people who spend their lives as civil servants or in politics trying to do these things. It’s a lot harder than you imagine on the outside.”

Returning to academia, Van Reenen joined the faculty at the London School of Economics, where he became head of the Center for Economic Performance (CEP), an academic think tank where he oversaw a staff of around 100 while continuing his own work. The CEP actively aims to inform public debate about large-scale economic matters; it is akin to a Washington think tank but hosted by a university.

“We tried to be a bridge between academic work and the policy world, in order to contribute toward the debate,” Van Reenen says. “It’s a constant battle for engagement, a battle for hearts and minds. You have to be very active.”

In his role as CEP head, Van Reenen became very involved in a recent contentious event: Brexit, Britain’s 2016 vote by referendum to leave the European Union, in a form still to be determined. Van Reenen became a leading expert warning of the economic pitfalls of Brexit. He makes no secret of his frustration with the pro-Brexit political campaign, which adopted a sharply anti-expert and anti-immigrant focus.

“If you look at the research on the economic impact of European immigration into the U.K., it’s been very positive,” Van Reenen says. “Immigrants pay more in tax than they take out in benefits. But it’s hard to break through when large parts of the media are saying the opposite.”

By the time Brexit narrowly passed in June 2016, however, Van Reenen had already agreed to join MIT, to launch what he sees as a new phase in his career. The Institute is a natural destination for a scholar studying the causes and consequences of innovation.

“MIT is a fantastic fit for my interests,” says Van Reenen. “There are a lot of economists who do this here, but also noneconomists who are creating the future.”

Now that he is settled in, Van Reenen’s current work on the impact of technology is taking still another turn. He is increasingly examining the effects of technology on work and employment, an interest he shares with many MIT Sloan faculty, as well as Department of Economics colleagues such as Daron Acemoglu and David Autor.

In fact, along with Autor and three other co-authors, Van Reenen has contended in recent studies that the rise of “superstar” firms with massive market power helps explain a central economic question: why the growth of wages, for many workers, has slowed down in recent decades. Today’s corporate giants have added revenue without increasing labor costs much, the research finds — in part because of their applications of technology.

“If you want to understand why inequality has increased so much in the last 40 years, one of the fundamental facts is new technologies,” Van Reenen observes. His own mother, he notes, worked in a bank but today would likely not find that work available. “That was a good job, but her job has disappeared. ATMs have basically gotten rid of those types of jobs. Some groups in the middle of the income distribution have lost out with technology.”

Van Reenen plans to continue that kind of work — and to continue airing his findings and ideas, in his role as a very public-minded thinker.

“I’ve always thought that’s part of the job of any intellectual,” Van Reenen says. “Not just to think about the world but to try to participate, to change it for the better.”

The Economist explores the basics of free trade, its benefits and downsides, with Prof. John Van Reenen. “With free trade, you come into more contact with foreign companies, new ideas, new people and so on,” explains Van Reenen. “That’s mutually beneficial. And it is a political force for cooperation.”