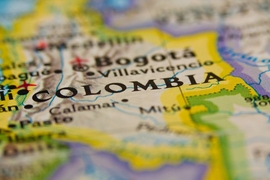 The country of Colombia has long been riven by paramilitary groups and guerillas. Over the last five years or so, the government has gradually reclaimed lost ground, but the process has been a difficult one. Can Colombia teach us anything about state-building and its challenges?

That might not seem like a pressing problem to those living in the developed world. But state-building is a huge challenge in regions where governments have a very modest presence in the lives of their citizens.

“We take state capacity as a given,” says MIT economist Daron Acemoglu. “But when you look around the world, what’s striking is [the] huge differences in the capacities of states. In Africa and part of Latin America and parts of Asia, the state is most notable by its absence, both at the local level and at the national level.”

Now, according to a new study co-authored by Acemoglu, the case of Colombia suggests something definite about state development: States develop and spur economic growth best when they grow at both the local and national levels. Left to themselves, local governments will underinvest in building their own capacities — law enforcement, infrastructure, education, health care, and so on. But when a national government invests as well, a catalytic effect occurs, and those local investments can span an entire region, helping it grow.

A key point, Acemoglu says, is “not just what state capacity does for your municipality, but what state capacity does for an entire area. If you have no law enforcement in your municipality, that doesn’t just affect you, it affects neighboring places. If you have no ability to control infectious diseases, it creates spillovers.”

The paper, “State Capacity and Economic Development: A Network Approach,” is co-authored by Acemoglu, who is the Elizabeth and James Killian Professor of Economics at MIT; James Robinson of Harvard University; and Camilo Garcia-Jimeno of the University of Pennsylvania. It has just been published in the American Economic Review.

By modeling patterns of local investment, the authors were able to draw out an essential problem with locally generated state investment: Municipalities only have incentives to spend on projects that benefit their own residents. The regional benefits of municipal investments are real — a local clinic can stop diseases from spreading widely, for instance — but why should a town invest in helping other residents when it might wait and benefit from the spillover of other towns’ investments?

Thus, as the authors write in the paper, “local state-building will lead to major underprovision of state capacity.”

Or, as Acemoglu adds, “If decisions are made purely at the local level, [local leaders] do not internalize those [network] effects. That leads to underprovision. And the underprovision gets amplified because of these strategic issues. One of the roles of the model is to clarify that.”

Of course, in many countries, the basic ability to invest is severely limited. In Colombia, tax revenue was only 5 percent of GDP as recently as 1970, while some regions are still not fully integrated with the rest of the country. The growth pattern of every country, and its ability to invest in state capacity, varies.

But scholars say the current study suggests a series of useful research questions on state growth generally. Stylianos Michalopoulos, an assistant professor of economics at Brown University who has read the paper, says one of those questions concerns “the optimal jurisdictional design as well as the appropriate degree of decentralization” for states.

Michalopoulos also suggests that “it will be interesting to think about these results” in terms of the incentives of local politicians with national ambitions — who might be wary of making investments that help rival cities or regions.

Finally, Michalopoulos adds, the matter of whether state and local investments are complementary may vary, outside of Colombia, but that “is an empirical question, and thanks to the framework developed by the authors, one can undertake similar explorations in different countries and different points in time to shed light on this question.”

The current paper about state-building in Colombia is part of a long-term, wide-ranging series of studies by Acemoglu and Robinson about the effects of states and political institutions on economic growth.

In many papers and in multiple books — most recently, “Why Nations Fail,” from 2012 — the scholars have argued that democratic institutions that provide certain liberties and protect property rights have strongly spurred economic growth throughout much of recorded history.

Since 2012, Acemoglu and Robinson have launched a series of country-specific studies intended to further grasp the complexities of government institutions, such as the interplay of federal and local levels of government.

One theme of the current research that Acemoglu and Robinson are developing is that the complementary relationship between local and national government runs both ways. That is, in the case of Colombia, it may be that local government alone cannot build state capacity in an optimal way; but in other cases (such as current-day Afghanistan), they believe that top-down efforts at federal state-building alone cannot work if unaccompanied by popular support for local government.

“The capacity of the state has to co-develop along with political institutions that keep that state accountable and transparent and constrained in some sense,” Acemoglu says.

Four professors elected to the National Academy of Sciences

The deep roots of inequality