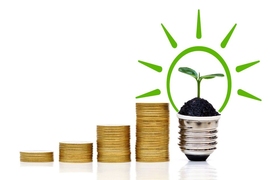 ↓ Download Image
Caption: “We propose that you use the carbon tax in moderation and use research subsidies for clean technology in order to make that transition [to clean technology] faster,” Daron Acemoglu says.

Caption:
“We propose that you use the carbon tax in moderation and use research subsidies for clean technology in order to make that transition [to clean technology] faster,” Daron Acemoglu says.

“Most people know we are frying the planet,” says MIT economist Daron Acemoglu, referring to the effects of climate change.

After all, 2015 was the hottest year on record, portending drastic long-term problems involving agriculture, rising sea levels, drought, and much more.

“What is probably less clear is how to resolve that,” Acemoglu adds.

On one level, we know the answer: Replace carbon-emitting fossil fuels with clean energy, including solar and wind power. To do this, many economists recommend a carbon tax. A smaller number of experts also endorse more government funding for research and development (R&D) in clean energy. In theory, both measures should make clean energy more economically competitive with oil, gas, and coal.

But to what extent would those policies influence the transition from dirty energy to clean energy? In a newly published paper, Acemoglu and three colleagues present a uniquely detailed model of the dynamics of innovation in the energy industry. In so doing, they indicate how supporting clean energy R&D, not just a carbon tax, might be the best way to help clean energy technologies compete with traditional forms of energy.

“We propose that you use the carbon tax in moderation and use research subsidies for clean technology in order to make that transition faster,” says Acemoglu, the Elizabeth and James Killian Professor of Economics at MIT and an affiliate of the MIT Institute for Data, Systems, and Society. And on the R&D front, he adds, “The optimal policy is front-loaded intervention right away.”

Indeed, the model indicates that an ideal policy would feature both a high initial level of R&D subsidies, which would drop to nearly zero after 50 years, and a carbon tax that increases over a roughly 130-year period before dropping off. A crucial mechanism at work is that the high R&D subsidy allows for a quicker transition to clean energy while not slowing down economic growth, as a carbon tax alone would.

“Clean technologies allow you to bypass the growth-retarding implications of a carbon tax,” Acemoglu explains.

And given that the effects of climate change will have heavy social costs, the scholars also estimate the costs of not implementing this kind of two-front policy. Delaying what they believe is the optimal policy by 50 years, the researchers estimate, would have a social welfare cost equivalent to a perpetual 1.7 percent drop in annual consumption, from today forward. And relying only on a carbon tax, with no R&D subsidies in the mix, would be equivalent to a 1.9 percent annual drop in consumption.

The federal budget for the 2016 fiscal year included about $6.4 billion in clean energy research funding; the White House has proposed doubling that by the 2021 fiscal year.

The paper detailing the research, “Transition to Clean Technology,” is published in the latest issue of the Journal of Political Economy. In addition to Acemoglu, the co-authors are Ufuk Akcigit of the University of Pennsylvania, Douglas Hanley of the University of Pittsburgh, and William Kerr of Harvard University.

The research uses detailed historical data from 1976-2009 to build a model of the competition between clean and dirty (or carbon-emitting) forms of energy, and analyzes what that competition would look like under varying sets of conditions, such as those driven by policy changes.

The data in the model include information about R&D expenditures, patents, sales, employment, and more, extracted from the U.S. Census Bureau, the National Science Foundation, and the National Bureau of Economic Research. The researchers used data covering 1,576 firms in the energy sector, which make up 19 percent of U.S. R&D and generate 70 percent of energy patents.

In the model, energy technologies move in a series of advances — think rungs on a ladder — while competing against each other. Given essentially the same costs, equivalent clean and dirty technologies competing against each other should fare equally well, more or less, in terms of things like patenting, which can be used to measure technological advances. The historical data helps the researchers quantify the relationship between funding and innovation, among other things.

However, the playing field is currently not equal in energy technology. Among other matters, the study shows that across a wide swath of industries, fossil-fuel firms have a higher cumulative stock of patents in 87 percent of the specific technology categories the study details, compared with clean-energy firms.

Moreover, in those cases, the gap between the leading-edge technologies and the competitors trying to catch up is on aggregate twice as great for the fossil-fuel firms than the clean-technology firms; that is, the dirty energy companies are generally farther ahead of the other firms in their fields.

The takeoff to self-sustaining innovation

That’s why R&D subsidies, and not just a carbon tax, matter so much. As the data and model reveal, a technological edge can sustain itself, since it produces revenue that can lead to further improvements in that technology. Meanwhile, R&D investment in competing technologies will lag if a near-term payoff is not available.

Thus, as the scholars write in the paper, “if clean research can be successfully maintained for a while, it gradually becomes self-sustaining as the range of clean technologies that can compete with dirty ones expands as a result of a series of incremental innovations.”

Or, as Acemoglu puts it: “The problem of making a transition to new technology is one of learning by doing at some level. The longer you delay, the harder it is to do it, because the farther ahead conventional fossil-fuel technologies become relative to green energy — solar, wind, geothermal.”

By adjusting the inputs of the model — such as the amount of R&D funding and the level of a carbon tax — the researchers were able to assess what changes in those levels make sense over time.

Scholars who have read the paper say it makes a valuable contribution to the field. The model “is stylized but rich enough, I think, to capture some of the main features of the sector,” explains John Van Reenan, an economist at the London School of Economics. As such, the model uncovers “some of the complexities of the dynamics in an elegant way,” he states.

Van Reenan notes that he may be “more optimistic” in some regards than the authors about the relative impact of a carbon tax, but he adds that “the idea of big upfront investments now in clean energy is a good one,” as a means of combatting the “inertia” that favors fossil fuel technologies.

Acemoglu also notes that the R&D in their model is not directed toward geoengineering research, that is, attempts to capture or limit existing carbon in the atmosphere; rather, the study is focused on the production of clean energy in the first place.

And despite the long time frames at work, he emphasizes that we have little time to squander when it comes to climate change.

“The problem is severe enough that you want to take action today,” Acemoglu concludes.

The National Science Foundation provided support for the study.