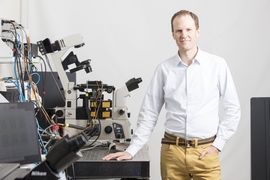 ↓ Download Image
Caption: “The major research directions and technology platforms that [my] lab is known for today came out of this process where the students or I had a crazy idea, and then the lab executed on it, with all the twists and turns along the way,” says Paul Blainey, associate professor of biological engineering.
Credits: Image: M. Scott Brauer

Caption:
“The major research directions and technology platforms that [my] lab is known for today came out of this process where the students or I had a crazy idea, and then the lab executed on it, with all the twists and turns along the way,” says Paul Blainey, associate professor of biological engineering.
Credits:
Image: M. Scott Brauer

Microfluidics — the science of manipulating tiny amounts of fluid through channels — has been widely used in fields such as genomics, where it has helped to enable high-speed sequencing. Several years ago, Paul Blainey started to wonder why microfluidics was not used for drug screening, another application that requires analyzing huge amounts of samples quickly.

That question led him and his students to develop a new type of microfluidics platform in which droplets are sealed within tiny wells, overcoming the problem of drug leakage that had stymied previous efforts. This system worked well for screening drugs, but it also ended up being useful for many other applications, far beyond what Blainey had originally envisioned.

“That’s one of the things I love about science — you can have a thought about why doesn’t microfluidics do more for chemistry, and then you develop something that turns out to have all these really exciting uses and applications that no one imagined,” says Blainey, a member of the Broad Institute of MIT and Harvard and a newly tenured associate professor in the Department of Biological Engineering.

Blainey’s lab takes a wide-ranging approach to solving technological problems, resulting in the development of many cutting-edge tools over the past several years, with applications in fields from genomics to diagnostics and drug development. He credits his students with helping to come up with ideas for novel technologies, and pursuing alternative directions until they find something that works.

“The major research directions and technology platforms that the lab is known for today came out of this process where the students or I had a crazy idea, and then the lab executed on it, with all the twists and turns along the way,” he says.

Growing up in Seattle, the son of a phone company technician and a nursing professor, Blainey had a natural affinity for engineering. “I was always that kid who was into building models,” he recalls. However, he began his academic career in the sciences, majoring in chemistry and mathematics at the University of Washington. He went on to earn a PhD in physical chemistry at Harvard University, but while pursuing his degrees, he was drawn to the aspects of science most closely related to engineering.

“I really liked analytical chemistry, which is very much like an engineering discipline because it’s focused on instrumentation, measurement, and the quantitative aspects of chemistry,” he says.

After finishing his PhD, he went to Stanford University to work as a postdoc in the lab of Stephen Quake, a professor of bioengineering. There, he worked with one of the first high-speed, next-generation genome sequencing machines installed in an academic lab, in 2007.

“The result was that I learned sequencing technology and genomics, I learned a little bit of bacterial genetics, I learned microfluidic technology, and I really started to appreciate how these things could play together,” Blainey says.

At Stanford, he performed single-cell genome sequencing of environmental microbes, but he wanted to turn his research focus toward biomedicine and studying human cells, so he applied for a faculty position at the Broad Institute. Before coming for his interview, he thought he would prefer living on the West Coast, but his visit to MIT changed his mind.

“Despite having been at Harvard for graduate school, I knew very little about the Broad and very little about MIT,” he says. “I took the trip to Boston, which exceeded my expectations. The scientific and collaborative potential at the Broad Institute and surrounding institutions jumped out so clearly.”

When Blainey became a member of the Broad Institute, he also joined MIT’s Department of Biological Engineering, renewing his longstanding interest in engineering. He launched his lab with the goal of developing biotechnologies that could strongly impact biomedical research and be broadly disseminated.

“We were interested in identifying opportunities to develop technology that would fill crucial gaps in the life science research portfolio,” he says. “We had the opportunity to talk with people, see what the needs were, see where biological research was being well-served by technology, and try to find gaps that might overlap with our toolkit or new things we could invent.”

One area where Blainey saw a need for new technology was in screening potential drug compounds. One of the big challenges in screening drugs is making sure there is enough of each compound to test it against a huge number of single cells. Researchers weren’t using microfluidics to help with these screens because drug molecules tend to leak out of the tiny droplets used in microfluidic devices.

One of Blainey’s graduate students, Tony Kulesa, came up with an idea for a new way to solve the problem, which was to seal nanoliter droplets into an array of tiny wells on a microfluidic chip. This prevented the drugs from leaking out, and enabled large-scale screens.

This technology turned out to be very useful for screening individual drugs and also combinations of drugs. In a paper published in 2018, the researchers showed that this system could be used to identify compounds that help existing antibiotics to work better. The Broad Institute is now launching a new center funded by the National Institute of Allergy and Infectious Diseases, where this platform will be used to search for additional compounds with antimicrobial activity.

It later turned out that this system could be useful for a variety of experiments that involve testing the interactions of many different combinations of cells or molecules.

In one project, Blainey worked with Jeff Gore, an MIT associate professor of physics, to combine different strains of bacteria in droplets and study how they interact with each other. He also used it to create a new version of a CRISPR-based diagnostic technology called Sherlock, previously developed by several other labs at the Broad Institute. The droplet array platform allows the test to be carried out on many samples at a time, and to simultaneously test for many different diseases.

Blainey’s lab continues to seek out new areas that could benefit from technological innovation, while also pursuing potential applications for the tools they have already developed.

“Our antennae are sensitive to these general types of technical barriers where if you can come up with robust and general solutions, it really unlocks a lot of stuff. But we’re also excited to dig further into the biology using tools we’ve already developed,” he says. “It’s a bit like grassroots politicking — you really have to get out there and pound the pavement and show how it can be used in different ways.”

Microfluidics for the masses

Andres Sevtsuk’s new work estimates foot traffic in cities — so planners and developers can study the flow of people, not just vehicles.