Microfluidics for the masses 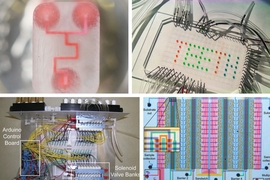 Caption:
Metafluidics.org, a new MIT open-source website, supplies blueprints for microfluidic parts. Pictured are a few photographs from the website.

A new MIT-designed open-source website might well be the Pinterest of microfluidics. The site, Metafluidics.org, is a free repository of designs for lab-on-a-chip devices, submitted by all sorts of inventors, including trained scientists and engineers, hobbyists, students, and amateur makers. Users can browse the site for devices ranging from simple cell sorters and fluid mixers, to more complex chips that analyze ocular fluid and synthesize gene sequences.

The site also serves as a social platform for the microfluidics community: Any user can log in to submit a design; they can also like, comment on, and download design files to reproduce a featured device or improve on it.

“There’s a familiar experience for people in microfluidics: You see a really amazing paper that shows you a design, but if you want to try to copy the design, the actual design files that are a critical part of reproducing or remixing a device are not shared in any systematic way,” Kong says. “As a result, researchers around the world are in parallel reinventing the wheel. It’s one of the reasons why open-source in general is a very powerful set of principles. It can really accelerate the diffusion of technology.”

Kong and his colleagues outlined the open-source platform in a paper published last week in the journal Nature Biotechnology. His co-authors are Todd Thorsen, Peter Carr, and Scott Wick of MIT’s Lincoln Laboratory; Jonathan Babb and Jeremy Gam in the Department of Biological Engineering; and Ron Weiss, professor of biological engineering and of electrical engineering and computer science.

The researchers modeled their Metafluidics site after popular open-source repositories such as GitHub — a free site that hosts open-source software projects — and Thingiverse, a website that features hardware design files for user-created toys, gadgets, and robots.

Kong came up with the idea for Metafluidics as a synthetic biologist at Lincoln Laboratory, where he worked to combine DNA fragments to reprogram new functions into living cells. To do so, he regularly made use of DNA repositories such as the National Institutes of Health’s GenBank — a publically available database through which scientists can share and access genetic sequences and their associated functions.

“There’s been quite a bit of sharing of different types of information around synthetic biology,” Kong observes. “So this kind of larger open-source movement in biotech is important, and we’re hoping to fill this key part of the ecosystem that’s specifically related to hardware.”

The team worked with Bocoup, an open-source software consulting company, to design an open-source platform to share microfluidic designs. To access the free site, users fill out a brief profile to log in, after which they can browse through featured devices or search the site for specific microfluidic functions.

Each device uploaded to the site includes a brief description, along with a list of materials used to fabricate the chip, and its associated design files, such as computer-aided-design (CAD) drawings.

The site is currently populated with designs submitted by students and hobbyists along with leading experts in the field such as Thorsen, who has contributed several previously published, highly cited devices and the blueprints to reproduce them.

“We’re reaching out to major pioneers and leaders in the broader field and curating collections of their design files,” Kong says. “Hopefully this will inspire people to make the next generation of [microfluidics] parts.”

The site is managed by an editorial team, including Nina Wang, a rising sophomore in biological engineering at MIT, and Kong, who is working to build awareness of the site within the microfluidics community. Eventually, as people upload more devices, the team plans to highlight certain designs as, for example, a “Part of the Week.”

“Over time we also want to initiate challenges: Who can make the fastest particle sorter? Who can make devices that can culture a certain type of gut microbe?” Kong says. “My opinion is that innovation as a whole benefits when you have diverse communities involved and there’s a tremendous amount of openness.”

The researchers submitted a novel device to the site to demonstrate the open-source platform’s potential for use in synthetic biology. Using common microfluidic parts and an open-source controller, or valving system, the team designed a genetic circuit assembly device — a chip that automatically combines DNA fragments to form a new genetic sequence capable of performing a new function when embedded in a living cell.

“Our hope is, by demonstrating an application like DNA assembly with our open-source system, this will encourage others to reproduce our system and remix it for applications that are foundational to synthetic biology,” Kong says.

In the long view, he envisions the site will “democratize” microfluidics and illuminate new ideas from unexpected sources.

“We have a great mixture of parts, from the most advanced pioneers in the field, to students who are making microfluidics for the very first time,” Kong says. “There’s the potential for some obscure student from some other part of the world to develop a following, if the microfluidics community finds their part is interesting or cool.”

This research was supported, in part, by the Assistant Secretary of Defense for Research and Engineering, the National Institutes of Health, and the National Science Foundation.