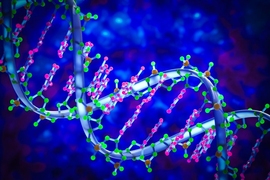 ↓ Download Image
Caption: Gen9's BioFab process, now being used by dozens of researchers and companies, cuts costs and accelerates the creation and testing of genes. 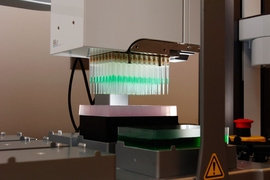 ↓ Download Image
Caption: Gen9's BioFab platform synthesizes small DNA fragments on silicon chips and uses other technologies to build longer DNA constructs from those fragments. Done in a parallel, this produces hundreds to thousands of DNA constructs simultaneously. Shown here is an automated liquid-handling instrument that dispenses DNA onto the chips.
Credits: Courtesy of Gen9

Caption:
Gen9's BioFab platform synthesizes small DNA fragments on silicon chips and uses other technologies to build longer DNA constructs from those fragments. Done in a parallel, this produces hundreds to thousands of DNA constructs simultaneously. Shown here is an automated liquid-handling instrument that dispenses DNA onto the chips.

Inside and outside of the classroom, MIT professor Joseph Jacobson has become a prominent figure in — and advocate for — the emerging field of synthetic biology.

As head of the Molecular Machines group at the MIT Media Lab, Jacobson’s work has focused on, among other things, developing technologies for the rapid fabrication of DNA molecules. In 2009, he spun out some of his work into Gen9, which aims to boost synthetic-biology innovation by offering scientists more cost-effective tools and resources.

Headquartered in Cambridge, Massachusetts, Gen9 has developed a method for synthesizing DNA on silicon chips, which significantly cuts costs and accelerates the creation and testing of genes. Commercially available since 2013, the platform is now being used by dozens of scientists and commercial firms worldwide.

Synthetic biologists synthesize genes by combining strands of DNA. These new genes can be inserted into microorganisms such as yeast and bacteria. Using this approach, scientists can tinker with the cells’ metabolic pathways, enabling the microbes to perform new functions, including testing new antibodies, sensing chemicals in an environment, or creating biofuels.

But conventional gene-synthesizing methods can be time-consuming and costly. Chemical-based processes, for instance, cost roughly 20 cents per base pair — DNA’s key building block — and produce one strand of DNA at a time. This adds up in time and money when synthesizing genes comprising 100,000 base pairs.

Gen9’s chip-based DNA, however, drops the price to roughly 2 cents per base pair, Jacobson says. Additionally, hundreds of thousands of base pairs can be tested and compiled in parallel, as opposed to testing and compiling each pair individually through conventional methods.

This means faster testing and development of new pathways — which usually takes many years — for applications such as advanced therapeutics, and more effective enzymes for detergents, food processing, and biofuels, Jacobson says. “If you can build thousands of pathways on a chip in parallel, and can test them all at once, you get to a working metabolic pathway much faster,” he says.

Over the years, Jacobson and Gen9 have earned many awards and honors. In November, Jacobson was also inducted into the National Inventors Hall of Fame for co-inventing E Ink, the electronic ink used for Amazon’s Kindle e-reader display.

Throughout the early-and mid-2000s, a few important pieces of research came together to allow for the scaling up of gene synthesis, which ultimately led to Gen9.

First, Jacobson and his students Chris Emig and Brian Chow began developing chips with thousands of “spots,” which each contained about 100 million copies of a different DNA sequence.

Then, Jacobson and another student, David Kong, created a process that used a certain enzyme as a catalyst to assemble those small DNA fragments into larger DNA strands inside microfluidics devices — “which was the first microfluidics assembly of DNA ever,” Jacobson says.

Despite the novelty, however, the process still wasn’t entirely cost effective. On average, it produced a 99 percent yield, meaning that about 1 percent of the base pairs didn’t match when constructing larger strands. That’s not so bad for making genes with 100 base pairs. “But if you want to make something that’s 10,000 or 100,000 bases long, that’s no good anymore,” Jacobson says.

Around 2004, Jacobson and then-postdoc Peter Carr, along with several other students, found a way to drastically increase yields by taking a cue from a natural error-correcting protein, Mut-S, which recognizes mismatches in DNA base pairing that occur when two DNA strands form a double helix. For synthetic DNA, the protein can detect and extract mismatches arising in base pairs synthesized on the chip, improving yields. In a paper published that year in Nucleic Acids Research, the researchers wrote that this process reduces the frequency of errors, from one in every 100 base pairs to around one in every 10,000.

With these innovations, Jacobson launched Gen9 with two co-founders: George Church of Harvard University, who was also working on synthesizing DNA on microchips, and Drew Endy of Stanford University, a world leader in synthetic-biology innovations.

Together with employees, they created a platform called BioFab and several other tools for synthetic biologists. Today, clients use an online portal to order gene sequences. Then Gen9 designs and fabricates those sequences on chips and delivers them to customers. Recently, the startup updated the portal to allow drag-and-drop capabilities and options for editing and storing gene sequences.

This allows users to “make these very extensive libraries that have been inaccessible previously,” Jacobson says.

Many published studies have already used Gen9’s tools, several of which are posted to the startup’s website. Notable ones, Jacobson says, include designing proteins for therapeutics. In those cases, the researcher needs to make 10 million or 100 million versions of a protein, each comprising maybe 50,000 pieces of DNA, to see which ones work best.

Instead of making and testing DNA sequences one at a time with conventional methods, Gen9 lets researchers test hundreds of thousands of sequences at once on a chip. This should increase chances of finding the right protein, more quickly. “If you just have one shot you’re very unlikely to hit the target,” Jacobson says. “If you have thousands or tens of thousands of shots on a goal, you have a much better chance of success.”

Currently, all the world’s synthetic-biology methods produce only about 300 million bases per year. About 10 of the chips Gen9 uses to make DNA can hold the same amount of content, Jacobson says. In principle, he says, the platform used to make Gen9’s chips — based on collaboration with manufacturing firm Agilent — could produce enough chips to cover about 200 billion bases. This is about the equivalent capacity of GenBank, an open-access database of DNA bases and gene sequences that has been constantly updated since the 1980s.

Such technology could soon be worth a pretty penny: According to a study published in November by MarketsandMarkets, a major marketing research firm, the market for synthesizing short DNA strands is expected to reach roughly $1.9 billion by 2020.

Still, Gen9 is pushing to drop costs for synthesis to under 1 cent per base pair, Jacobson says. Additionally, for the past few years, the startup has hosted an annual G-Prize Competition, which awards 1 million base pairs of DNA to researchers with creative synthetic-biology ideas. That’s a prize worth roughly $100,000.

The aim, Jacobson says, is to remove cost barriers for synthetic biologists to boost innovation. “People have lots of ideas but are unable to try out those ideas because of cost,” he says. “This encourages people to think about bigger and bigger ideas.”

Scientists unveil tools for rewriting the code of life

How to grow wires and tiny plates