Optimizing kidney donation and other markets without money 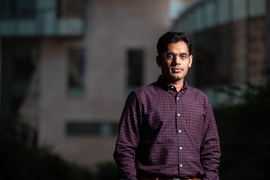 When people die, they can become organ donors for a period of about 24 to 48 hours. But 20 percent of kidneys in the U.S. that could be transplanted in these situations are never used.

Meanwhile, by some estimates, 30 to 50 percent of living people who are willing to donate a kidney never find a recipient. With around 100,000 Americans waiting for kidney transplants at any given time, those are suboptimal situations.

What can be done to help fix this? Give the problem to a market design scholar, such as MIT economist Nikhil Agarwal, who has studied the issue in close detail.

From within the walls of MIT’s Building E52, where economics equations litter the whiteboards, Agarwal’s work has now leapt out to the medical establishment. In the last year, a new method he and some colleagues formulated for a more efficient kidney-donation system has been approved for implementation by the Alliance for Paired Donation, the second-largest platform for such transplants in the U.S.

“It’s particularly exciting,” says Agarwal, who is low-key about his accomplishments but allows that he is thrilled to see his work having a tangible effect. Currently there are about 800 kidney exchange transplants in the U.S. annually; by Agarwal’s estimation, a more efficient exchange market could increase that number by 30 to 60 percent.

Though Agarwal’s work is still being implemented, and it is not yet easy to quantify its impact yet, it is simple enough to see his rising trajectory in academia. For his research and teaching, Agarwal was granted tenure at MIT earlier this year.

“That’s not how a lot of markets work”

At first glance, transplants might not seem to be a problem for an economist. But a growing cadre of economists have made notable progress understanding markets that match pairs of things — transplant donors and recipients, applicants and schools — and do not use money to settle matters.

“In economics,” Agarwal says, “we often [assume] there’s the demand, the supply, the price, and the market clears, somehow. It just happens.” And yet, he says, “That’s not how a lot of markets work. There are all these different important markets where we do not allow prices.”

Scholars in the field of “market design,” therefore, closely examine these nonfinancial markets, observing how their rules and procedures affect outcomes. Agarwal calls himself a specialist in “resource allocation systems that do not use prices.” These include kidney donations: The law forbids selling vital organs. Many education systems and entry-level labor markets, for example, also fit into this category.

In Agarwal’s case, he has a specialty within his specialty. Some market-design scholars are theorists. Agarwal is an empiricist who locates data on nonpriced markets, evaluates their efficiency, and works out improvements.

In a series of papers examining the inefficiencies of kidney transplant systems in the U.S., Agarwal and a variety of co-authors looked at the numbers and came back with solutions. One major source of inefficiency, Agarwal has discovered, is a lack of scale. Bigger networks of hospitals could better match donors and recipients. Right now, 62 percent of kidney donor-and-recipient pairings consist of patients at the same hospitals; that number would be lower in a more efficient system.

One reason for this: Donors and recipients must have matching blood types. People with type O blood can donate kidneys across blood types, but they can only receive kidneys from other type O people. Due to the timing of when people enter kidney markets, a bigger network is more efficient in this regard. In single-hospital networks, 22.8 percent of type O donors give a kidney to a non-type O recipient (for whom other donors might be found), while in the biggest U.S. kidney network, just 6.5 percent do, meaning its type O participants are connecting more optimally.

Agarwal’s research also suggests that hospitals tend to be very concerned about the financial and administrative costs they incur while handling the transplant process — although such costs are small compared to the overall social value of transplants. Well-crafted subsidies and mandates, as he has detailed, can help address this particular problem.

Open questions in need of answers

Agarwal was an economics and math double major at Brandeis University, where he received his BA in 2008. Directly out of college, Agarwal was accepted into Harvard University’s PhD program in economics, but, as he recounts it, he did not have a clear idea of what he wanted to study. Before long, though, Agarwal connected at Harvard with Alvin Roth, an innovative market-design theorist who would soon be awarded the Nobel Prize, in 2012; Roth’s work helped create new mechanisms for school-choice programs.

Working with Roth, as well as Harvard professors Susan Athey (now of Stanford University) and Ariel Pakes, and MIT Professor Parag Pathak, Agarwal began focusing on market-design problems and developing his taste for empiricism. The theorists had broken the field of market design open; as a result, unanswered questions about the activity in many markets had been identified but not necessarily answered.

“I’ve always liked combining different ways of learning about something,” Agarwal says. “Initially I was training as a theorist, but then I got interested in data, because I just saw a big set of open questions there, which wasn’t informed by numbers.” Pakes, who Agarwal cites as a major influence, “showed me what data, especially when combined with theory, can teach us.”

Agarwal joined the MIT faculty in 2014 and began publishing papers on a range of topics, on a variety of markets. He has studied online advertising and school-choice systems; one of his first prominent papers, in the American Economic Review in 2015, examined the system used to allocate medical students to residencies.

Still, the majority of Agarwal’s work has been on kidney transpants specifically, a field of knowledge he has gradually built up.

“You need to have domain expertise,” Agarwal says. “It’s very important to have that. Otherwise [theories] may not be directly implementable. For that reason, people really do specialize, so they understand the setting.” One of Agarwal’s co-authors is a kidney transplant surgeon.

“I’ve learned a lot from other people,” Agarwal notes.

He has also benefitted, as he tells it, from his home in the MIT Department of Economics, where all kinds of work is valued — even work on nonpriced markets, which, as Agarwal quips, can seem like “kind of a weird thing to study,” at least to outsiders.

“The economics department is an intellectually amazing place to think about things,” Agarwal adds. “People value good work on the merits and they’re open-minded.”

Now Agarwal is also encouraging others to research markets of all kinds: His students are studying topics as diverse as electricity markets, the palm oil industry in Indonesia, and water markets in Australia, among many others. Every such market, he notes, can differ from others, in its practices and in the behavior of its participants.

“We have to think a little more carefully about how markets work and demand meets supply, and what are all the implications of that,” Agarwal says.

After all, as Agarwal has already seen, a little more careful thought about markets could have a lot more real-world impact.

Is the medical match fair?